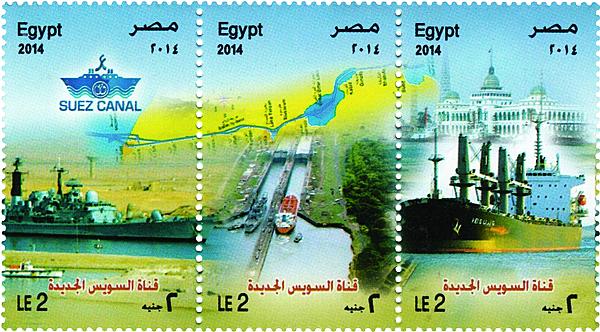 Egypt recently issued this strip of three £2 stamps commemorating the Suez Canal, but the photograph on the center stamp shows a scene at the Panama Canal. The Egyptian government has announced plans to dig a new canal.

A new three-stamp Suez Canal commemorative set from Egypt features a photograph of a canal on the center stamp — but it’s not the right canal.

The scene on the stamp shows part of the Panama Canal.

The other two stamps picture ships. One of those stamps also shows the Suez Canal Authority administration building in Port Said.

The three se-tenant £2 Suez Canal stamps were issued Aug. 5 to coincide with the Egyptian government’s announcement of its plans to build a new Suez Canal next to the existing canal, which is approximately 145 years old.

The canal connects the Mediterranean Sea to the Red Sea. It opened Nov. 17, 1869.

StampBoards.com contributor “nasreldeen,” in Cairo, posted an image of the new Egyptian Suez Canal stamp beside a photograph of the Panama Canal that appears to show the same scene.

“The unpleasant surprise, was that the design of the middle stamp is based on a picture of Panama canal!!!” the contributor posted.

“The image looks to me like the entrance to the Panama Canal’s Miraflores locks looking southward,” Len Nadybal, Canal Zone Study Group publications manager, told Linn’s. “It could be a plain vanilla rendering of any of the locks, but the shorelines to the east and west of the entrance to the locks in the stamp’s image matches most closely with Miraflores and buildings on the site.”

Miraflores is one of three lock sets in the Panama Canal.

A lock is a chamber system used to raise and lower ships between bodies of water that are at different depths.

The roads and vegetation near the canal in the stamp photograph also help to identify the scene as showing part of the Panama Canal.

This isn’t the first gaffe on an Egyptian stamp celebrating the Suez Canal.

In 1956, a small map on a 10-milleme stamp (Scott 386) has the canal linking up with Lake Manzala. Geographically, the canal does not connect with the lake as shown on this stamp.

That earlier stamp was issued Sept. 26, 1956, on the occasion of the nationalization of the Suez Canal that took place July 26 of that same year.