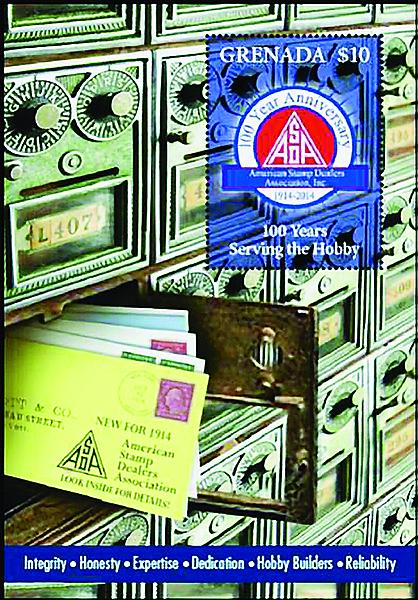 One of two souvenir sheets from Grenada that will be issued Oct. 24 at the National Postage Stamp Show in New York City. The souvenir sheet and the show celebrate the upcoming 100th anniversary of the American Stamp Dealers Association.

The Caribbean island nation of Grenada will issue two souvenir sheets Oct. 24 to commemorate the 100th anniversary of the American Stamp Dealers Association.

Sam Malamud, the president of Inter-governmental Philatelic Corporation, announced the special observance: “We are quite pleased that Grenada has given permission for the issuance of this special honor. It’s a tribute to all that the American Stamp Dealers Association has accomplished over the past 100 years in building and nurturing the stamp hobby.”

Malamud has been an ASDA member for more than 50 years.

The souvenir sheets will be issued with a 1:30 p.m. first-day ceremony at the 2014 ASDA National Postage Stamp Show in New York City. The ceremony is open to the public. A cacheted first-day cover designed by IGPC and will be available to collectors following the ceremony.

One souvenir sheet includes a single $10 (East Caribbean dollars) stamp using the ASDA 100th anniversary logo as its primary design. The logo is set against a dark blue background, with the phrase “100 Years Serving the Hobby” in white lettering near the bottom.

The selvage of this sheet shows a wall of old post office box doors with combination dials. One door is open, and letters extending out of the open box include one in front with the ASDA triangle logo and franked with a United States George Washington stamp from a century ago. Elements of the post office box doors also show through the dark blue background of the $10 stamp.

The design of the second souvenir sheet hasn’t been revealed.

The ASDA fall National Postage Stamp Show will take place Oct. 23-26 at the New York Hilton Midtown at 1335 Avenue of the Americas in New York City. The show will also celebrate the 100th anniversary of the ASDA. Admission is free for all four days of the show.

Details of the anniversary show were published in Linn’s issue of Sept. 22 on page 16.

The American Stamp Dealers Association is a professional organization serving philately since 1914.Its members represent all segments of the philatelic marketplace, both retail and wholesale.