Stamps mark the 25th anniversary of fall of the Berlin Wall

The Estonian souvenir sheet in the three-way joint issue with Latvia and Lithuania. The three nations issued matching souvenir sheets. 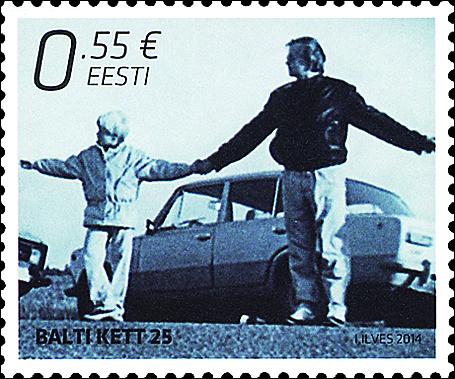 This Estonian stamp marking the 25th anniversary of the Baltic Chain shows two of the nearly 2 million people who formed a human chain across the three Baltic republics. 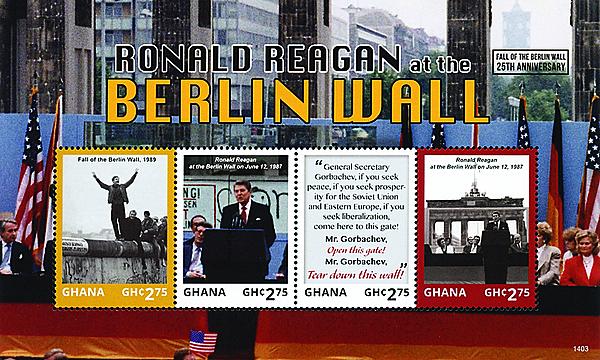 The names of 138 people who perished at the Berlin Wall are inscribed on this souvenir sheet from Vatican City. 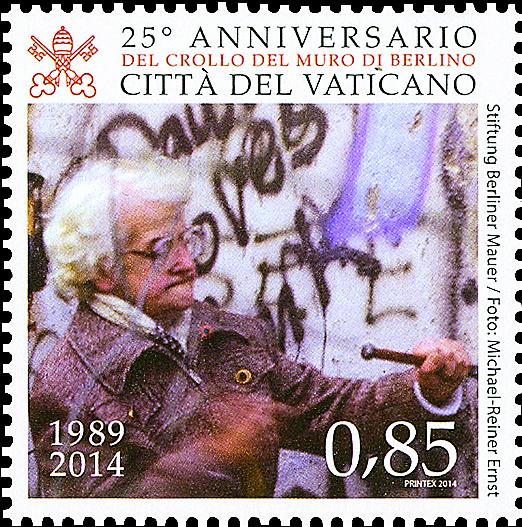 The Vatican City issued this stamp Aug. 28 to celebrate the 25th anniversary of the fall of the Berlin Wall.

A stamp and souvenir sheet from Vatican City commemorate the 25th anniversary of the fall of the Berlin Wall.

The wall, which separated East Berlin from West Berlin, began as a barbed wire fence built overnight by East German troops on Aug. 13, 1961.

A few days later, concrete blocks replaced the fence, and the building continued.

The website of Berlin’s Senate Chancellery, www.berlin.de, said: “In the years to come, the barriers were modified, reinforced, and further expanded, and the system of controls at the border was perfected. The Wall running through the city center, which separated East and West Berlin from one another, was 43.1 kilometers [27 miles] long. The border fortifications separating West Berlin from the rest of the GDR [German Democratic Republic, or East Germany] were 111.9 kilometers [69 miles] long. Well over 100,000 citizens of the GDR tried to escape across the inner-German border or the Berlin Wall between 1961 and 1988. More than 600 of them were shot and killed by GDR border guards or died in other ways during their escape attempt. At least 136 people died at the Berlin Wall alone between 1961 and 1989.”

After hearing reports on the evening news, thousands soon gathered, checkpoints were opened and Berliners began chipping away at the wall in celebration.

A scene of a white-haired man chipping at the wall is pictured on Vatican City’s €0.58 stamp issued Aug. 28.

The Vatican City’s philatelic and numismatic office describes the design as “showing a beautiful photo of those historic days taken by photographer Michael-Reiner Ernst in memory of all those who helped bring down the wall.”

The souvenir sheet with a single €3.60 stamp pictures a rainbow and includes the names of 138 people who died attempting to cross the border from East to West Germany. The list of names came from the Berlin Wall Foundation.

Printex, a security printer in Malta, printed the 0.85-euro stamp by offset in sheets of 10. The same firm also printed the souvenir sheet.

Stamps issued June 23 by Nevis, July 1 by The Gambia and Aug. 14 by Tuvalu feature some of the graffiti art painted on the wall over the years.

A stamp from Nevis shows Birgit Kinder’s artwork of a Trabant car knocking down the wall. The car’s license plates bear the Nov. 9, 1989, date of the fall of the wall. The section of the wall with this mural is preserved in the East Side Gallery in Berlin.

United States presidents John F. Kennedy, Ronald Reagan and Barack Obama, all of whom visited Berlin, are pictured on stamps issued June 30 for Mayreau, an island in the St. Vincent Grenadines.

President Reagan is featured again on three stamps in a souvenir sheet from Ghana issued Aug. 7.

Two stamps in this sheet show Reagan visiting and speaking at the wall on June 12, 1987.

The fourth stamp in the sheet shows a November 1989 photograph by Stephen Jaffee of West Germans standing and sitting on the wall.

A three-way joint issue celebrates the 25th anniversary of another event, the Baltic Chain, also known as the Baltic Way.

On Aug. 23, 1989, approximately 2 million people formed a human chain across the Baltic republics of Estonia, Latvia and Lithuania to symbolize their desire for independence. The chain stretched 430 miles, linking the capitals of Tallinn, Riga and Vilnius.

The date for the event coincided with the 50th anniversary of the Aug. 23, 1939, signing of the German-Soviet agreement known as the Molotov-Ribbentrop Pact, which led to the Soviet occupation of the Baltic republics.

Each stamp shows a different portion of a group of people forming the chain.

In the souvenir sheets, the three images are united to form a longer human chain with the image from the Lithuanian stamp on the left, the Latvian stamp in the center and the Estonian stamp on the right. The chain also extends into the selvage of each sheet.

Each souvenir sheet only includes stamps from that republic. For example, on the Lithuanian souvenir sheet, all three stamps bear the “Lietuva” country name inscription and a 7-litas-€2.03 denomination.

The Estonian sheet includes three €1 stamps, and the Lithuanian sheet has three €0.78 stamps.

Indrek Ilves of Estonia designed all the stamps and souvenir sheets.