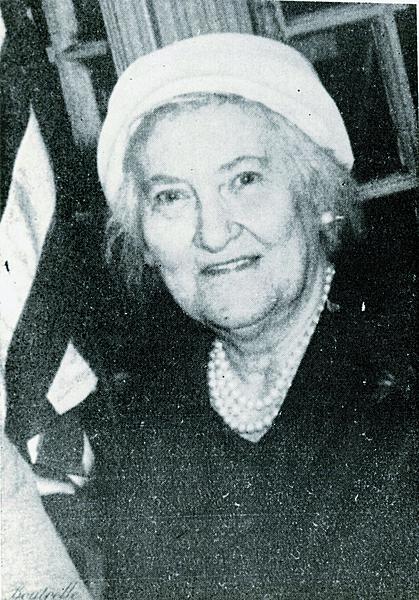 An undated photo of avid stamp collector Ethel B. McCoy of New York City, whose prized possession, a block of four Inverted Jenny postage stamps, was stolen in 1955. Courtesy of George Amick. 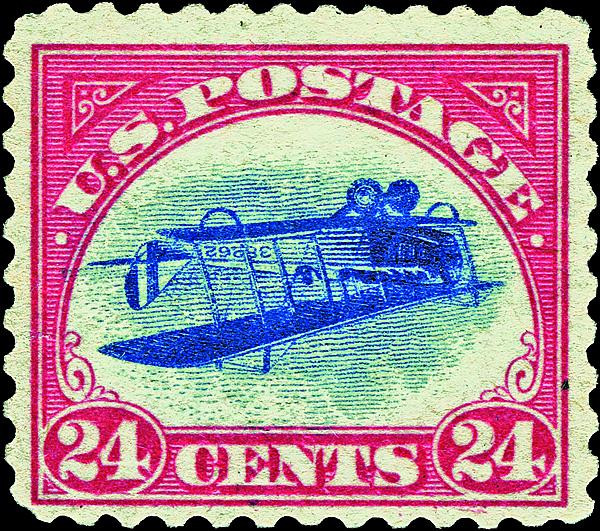 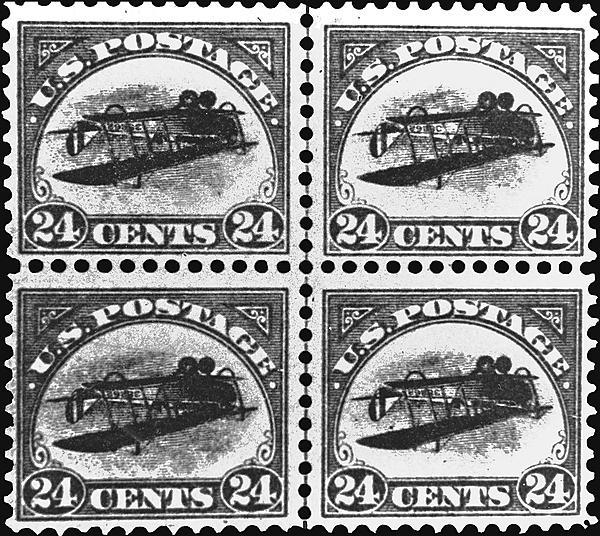 An intact block of four of the 1918 24¢ Inverted Jenny postage stamps was stolen in 1955 when its owner, Ethel B. McCoy of New York City, exhibited it in Norfolk, Va. The top right and bottom right stamps from the block (positions 66 and 76) are still missing. Courtesy of American Philatelic Research Library.

Hoping to spur a development in philately’s most celebrated cold case, Donald Sundman of Mystic Stamp Co. is offering a hefty reward for the recovery of two missing examples of America’s most famous stamp error.

The examples in question came from a block of four known as the McCoy block, stolen in broad daylight in 1955. Over the six decades since, half of the block has been recovered, but the other two stamps remain lost.

The reward was to be announced Sept. 13 by Sundman at the awards banquet of Aerophilately 2014, a meeting of airmail collectors at the American Philatelic Society headquarters in Bellefonte, Pa.

In addition to Sundman’s reward for the actual return of the stamps, the American Philatelic Research Library, which technically owns the stolen stamps, is offering a $10,000 reward for information leading to their recovery.

“It would be a great thing for the APS and the APRL if they got the stamps back,” Sundman said in an interview.

According to APRL President Roger Brody, the library has put together a committee and retained a private investigator to handle any possible leads.

Though probably altered and possibly damaged, the stamps should still be recognizable, thanks to old photographs of the McCoy block, by characteristics such as their centering, and flyspeck details like tiny paper inclusions and stray wisps of ink. They might also show faint traces of the numbers once penciled on the back to mark each stamp’s position in the original sheet.

Five other examples of the Inverted Jenny have been auctioned recently, for amounts ranging from $126,500 to $575,100, including the respective auction firms’ buyer’s premiums.

However, it would be impossible to sell the missing McCoy inverts openly, as they would instantly be recognized as stolen property and seized.

This would be their only legitimate chance to cash in.

Brody said the APRL would not seek prosecution for the original theft or for anyone’s subsequent possession of the stolen stamps, and the APRL has also received assurances from its contacts at the FBI that the Bureau is unlikely to take up the case again after six decades.

“Nobody was murdered,” Brody said. “We just want the stamps back.”

Ethel B. Stewart McCoy, the daughter of one of the founders of the Dow Jones news service, was one of the leading women philatelists of the mid-20th century.

She was an avid collector of early American commemoratives, airmails and precancels, and had a three-volume topical collection of palm trees on stamps.

But the center-line block of four Inverted Jennies was her pride and joy.

It was one of just seven blocks remaining from the original sheet of 100 of the 24¢ red-and-blue airmail stamp bought by William T. Robey at a post office counter just after it was issued.

Robey sold the invert sheet to dealer Eugene Klein, who then sold it to Col. E.H.R. Green.

Green broke the sheet up and dispersed most of it. No further examples of the error ever reached the public.

Before the sheet was broken up, the back of every stamp was numbered in pencil to identify its position in the sheet. The block that would later belong to McCoy consisted of the stamps in positions 65, 66, 75 and 76.

McCoy had lent her block to the APS to display at its annual convention in Norfolk, Va., in September 1955, when it was lifted from a display frame as the show was opening for the day.

None of the guards or dealers in the room saw a thing. An investigation by the FBI produced no leads or suspects.

George Amick’s thoroughly researched 1986 book Jenny! gives a riveting account of the theft and its aftermath that reads like a classic detective page-turner.

According to Amick, McCoy received a $15,000 payout from her insurance company.

She was stoical about what must have been, to her, a great emotional loss: the block had been a gift from her first husband, Bert Stewart, a coin collector who paid $16,000 for it in 1936.

After Stewart died, Ethel had remarried, tying the knot with a prominent philatelist named Walter McCoy in 1941. He joked that he married Ethel for her Jenny Inverts, while she married him for his Orangeburg coil, the rare 3¢ Washington, perforated gauge 12 vertically (Scott 389), that was only issued to one firm in Orangeburg, N.Y., in 1911.

When she accepted the insurance money, McCoy stipulated that if the stamps were ever recovered, she could return the money and keep the stamps.

One of the stolen stamps, separated from the block and altered to mask its identity, reappeared just three years later, in 1958, although McCoy wouldn’t get to see it.

Although the thief or whoever next handled the stamps had erased the penciled number and buffed its perforation tips to get rid of the telltale center line, the Weills recognized it from file photos as position 75, the lower-left stamp of the McCoy block, and contacted the FBI.

The Bureau declined to act, however, feeling the single stamp did not, at that time, pass the $5,000 threshold for violation of federal laws on interstate movement of stolen goods. The Weills were obliged to return the stamp to Castelli, although they did persuade the Bureau to at least interview him. Castelli claimed he had owned the stamp prior to 1955, though he had no documentation for its acquisition.

The stolen Jenny re-emerged in 1970 when it was auctioned under murky circumstances by Simmy’s, a Boston firm, before vanishing once more. Sometime in 1971, a man named Victor Spilotro claimed ownership, but nothing more was heard of him.

In 1977, the stamp popped up again when Castelli tried to sell it to a Las Vegas hotel owner named Robert Faiman, who submitted it to the Philatelic Foundation in New York for authentication.

The Foundation turned the stamp over to the FBI, and this time the feds acted. Castelli, interviewed by the Bureau a second time, repeated his vague and unlikely excuses. He was not charged.

McCoy, by then aged, unwell and unwilling to get into a fight, signed over her rights to all four stamps to the APRL. At the end of 1980, she passed away.

In January 1981, a U.S. court in New York awarded ownership of the position 75 stamp to the library. McCoy had been unable to remember the name of her old insurance company, and a government advertisement had failed to get any firm to come forward. A few months later, the stamp was auctioned to benefit the library’s endowment for $115,000, then considered a healthy price.

Shortly thereafter, a second stamp of the McCoy block surfaced.

This time, the stamp was donated to the APRL by a Chicago-area businessman named Marcel Lutwak, who was seeking a tax write-off. The APRL president at the time, James T. DeVoss, identified it as position 65, the upper-left stamp from McCoy’s foursome.

Although he felt the stamp unquestionably belonged to the library, DeVoss turned it over to the FBI for investigation. Lutwak was duly interviewed, but although his story seemed as flimsy as Castelli’s, he was not charged with any wrongdoing.

As Ken Lawrence describes in detail in the September 2014 issue of the APS journal American Philatelist, Lutwak’s invert may have been involved in another theft and recovery before he decided to give it to the library.

The library ended up keeping the second McCoy stamp and has exhibited it nationwide over the three decades since it was returned, helping to spur interest in the hobby.

As Lawrence noted in his article, all the known key players in the saga are now deceased.

“It’s likely that nearly everyone who might have personal knowledge of the theft and subsequent dispersal of the McCoy inverts has died,” he wrote. “But perhaps they left behind evidence, or perhaps the stolen stamps reside in estates whose beneficiaries don’t know what they have.”

APRL president Roger Brody outlined the procedure the library has drawn up in the event someone comes forward with a suspected position 66 or 76 Inverted Jenny.

First, Brody said, whoever thinks they might have one of the stamps should contact the American Philatelic Society at 800-782-9580, extension 246, and submit an image via e-mail to jenny@stamps.org.

If it seems that person might have one of the missing McCoys, the next step would be for them to submit the stamp itself to the Philatelic Foundation in New York for authentication, at no charge.

If the stamp’s identity is confirmed, the Foundation would send a certificate to the American Philatelic Research Library, which would arrange for the transfer of the stamp and have a check issued for $50,000 — or $100,000, in case both stamps are received.

Should someone come forward not with the stamps themselves but with conclusive information as to their whereabouts, the private investigator hired by the library would pursue that lead.

If the lead results in recovery, the tipster would get a $10,000 reward directly from the library, on top of the $50,000-per-stamp reward to whomever has possession.

Brody said the APRL would probably sell the recovered stamps and use the money to improve its ability to serve the hobby.

Sundman, of Mystic, said he would not be reimbursed by the library for the reward money if any of the stamps are recovered. His payment would be considered a donation to the APRL.

Sundman’s previous efforts to support the hobby include underwriting a lecture series at the Smithsonian Institution’s National Postal Museum in memory of his father, Maynard Sundman, and sponsoring his customers for membership in the APS. To date, Sundman has recruited almost 6,000 new members for the national organization.

Sundman also made headlines in 2005 when he traded his example of the nearly unique 1868 1¢ Franklin Z grill (Scott 85A) to Bill Gross for the Inverted Jenny plate block. The Z grill stamp, so called because of the experimental waffle pattern pressed into it to deter reuse, completed Gross’ U.S. collection.

The swap was valued at nearly $6 million.

Mystic, a large mail-order stamp dealer in Camden, N.Y., has used the image of the Inverted Jenny plate block in its marketing materials ever since.