The story of New Guinea’s evolution told through its stamps 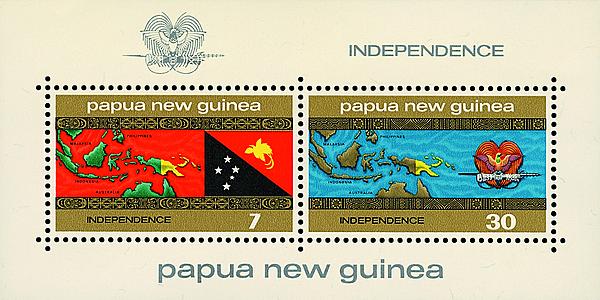 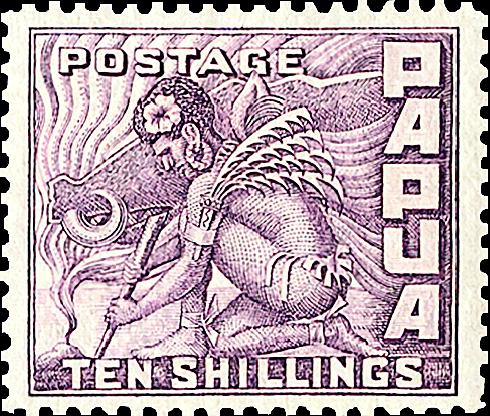 Art Deco elements make up the design of a 1932 Papua stamp showing a fire maker. 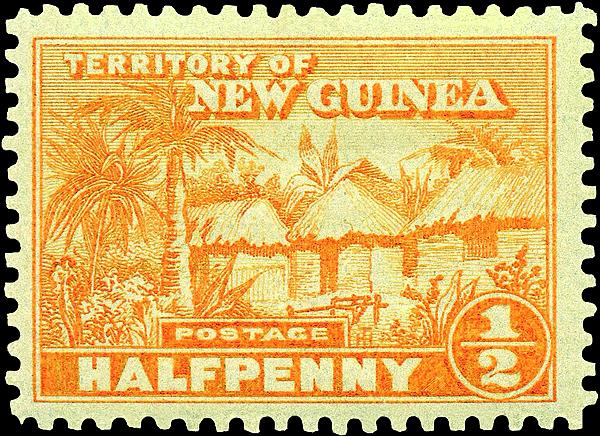 The first stamps of New Guinea as a territory were issued in 1925 and show native huts. 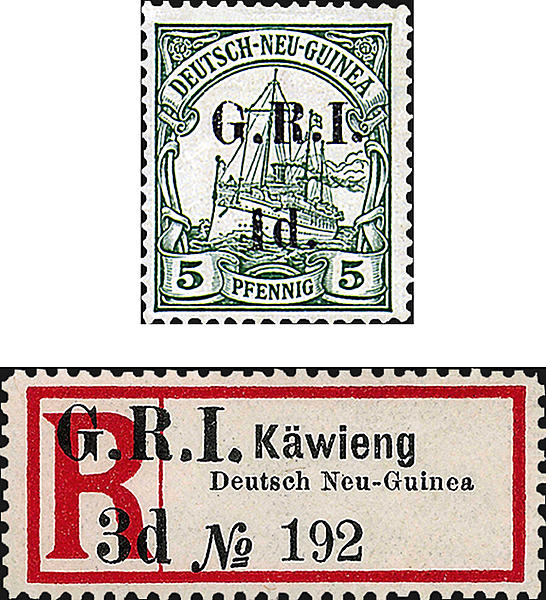 Australia occupied the island of New Britain during World War I. The G.R.I. overprint on stamps and registration labels (used as postage) honored King George and identified the issues as stamps of the British Commonwealth. 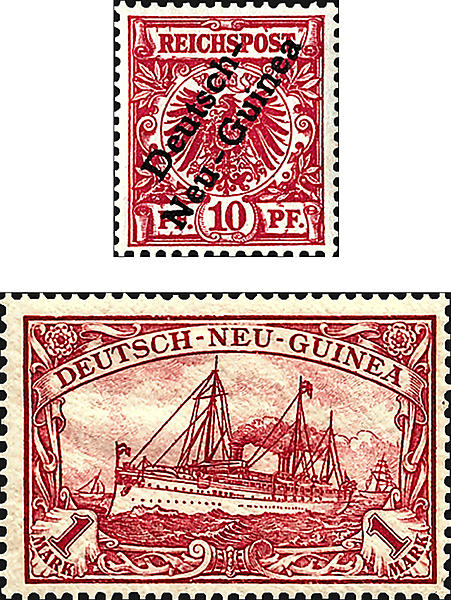 The lakatoi, a native boat, is shown on various bicolor stamps of Papua New Guinea from 1901-32. The first group had a “British New Guinea” inscription; the next stamps were overprinted “Papua.” A 1907 set bore the name Papua instead of British New Guinea; later issues were surcharged with new values. 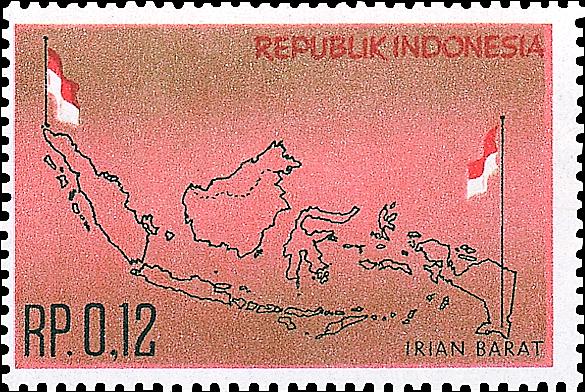 A 12-sen stamp commemorating the liberation of West New Guinea, issued May 1, 1963. 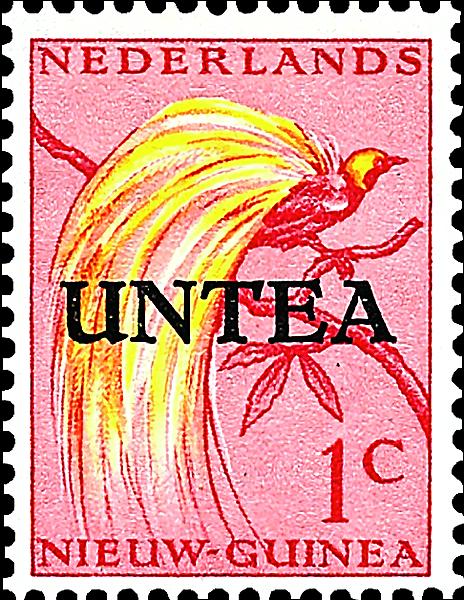 Stamps of Netherlands New Guinea were overprinted “UNTEA” in 1962 when the region was administered by the United Nations Temporary Executive Authority.

The first stamps of Netherlands New Guinea in 1950 resembled Dutch definitive stamps. Later issues showed local subjects, such as the bird of paradise.

New Guinea’s primary landmass is surrounded by smaller islands, most of which are also considered a part of New Guinea.

In the 19th century, a number of nations showed an interest in New Guinea. The Dutch came first in 1828. Great Britain raised the Union Jack at Port Moresby, New Guinea, on April 4, 1883. Germany was next, establishing trade on Neu Lauenburg Island, one of the outlying Bismarck Archipelago islands of New Guinea.

All of these European nations established postal systems and, not surprisingly, issued stamps to reinforce their presence in New Guinea.

Largely because of a strong presence by the Dutch East India Company (Vereenigde Oostindische Compagnie), most of what is now Indonesia and the western part of New Guinea came under the control of the Netherlands and was known as the Netherlands Indies, which became independent Indonesia (without west New Guinea) in 1949.

Netherlands New Guinea got its own stamps in 1950. Those initial stamps (Scott 1-21) were modeled after Netherlands definitive stamps issued in the 1940s.

In 1954, a subject that was uniquely New Guinean appeared on a 5¢ stamp: a beautiful bird of paradise (Scott 23).

In 1969, it officially became a province of Indonesia named Irian Jaya, which currently is broken into two Indonesian provinces and renamed West Papua and Papua, respectively.

Beginning that year, stamps from the British colony of Queensland in northeastern Australia were used in British New Guinea.

Beautiful bicolor stamps inscribed “British New Guinea” were issued in 1901 (Papua New Guinea Scott 1-8). The stamps featured a boat called a lakatoi made by the indigenous people of New Guinea.

In 1906, British New Guinea’s administration was taken over by the government of the newly federated Commonwealth of Australia. British New Guinea was renamed Papua, and the Lakatoi stamps were overprinted “Papua” (Scott 11-26).

The Lakatoi stamps are still popular with collectors seeking a challenging specialty.

Next up were Lakatoi stamps with the name “Papua” inscribed on the stamp in the banner above the boat (Scott 28-73).

A thorough study of Lakatoi stamps would involve paper types, assorted watermarks, different gauges of perforations, and printing varieties. It is quite the paper chase.

During World War I, Australia was successful in capturing and occupying Kaiser-Wilhelmsland and several German-held islands nearby, including New Britain, which was a part of German New Guinea.

At first, German New Guinea stamps were overprinted “G.R.I.” for George Rex Imperator in 1914 and 1915 (New Britain Scott 1-42). Many varieties of these surcharges exist, and likewise, there are many forgeries.

Lastly, Australian Kangaroo and Map stamps and King George V stamps were pressed into service and overprinted “N.W. Pacific Islands.” These stamps were in use in New Britain and Nauru from 1915 to 1923 (North West Pacific Islands Scott 1-49).

Germany lost all of its colonies after WWI, including German New Guinea.

The former German New Guinea became a League of Nations mandate territory called the Territory of New Guinea, administered by Australia until 1949.

Stamps were issued for the Territory of New Guinea beginning in 1925.

The first design shows native huts. The bird of paradise reappears on the next issue, in 1931.

An attractive issue of stamps inscribed “Papua” for the region formerly known as British New Guinea was issued in 1932. Its Art Deco elements are eye-catching in every way (Papua Scott 94-109).

World War II brought intense fighting to New Guinea. Although much mail was sent from military personnel, no stamps were issued during the 1942-45 time period. In the post-WWII period through 1952, Australian stamps were used in Papua.

In September 1975, Papua New Guinea became an independent nation. A pair of stamps was issued to celebrate independence (Scott 423-424), and they were also issued together on a souvenir sheet of two (424a).

Telling the story of New Guinea’s stamp history is complex but nevertheless interesting. The best way to start a New Guinea collection is to acquire at least one stamp for each of the colonial periods and work your way forward to the present day.