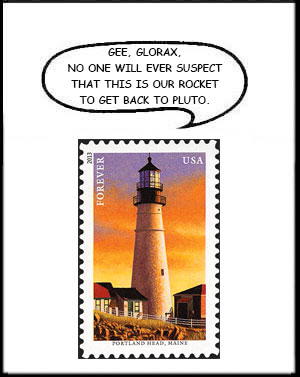 Chuck Vukotich wins one of two prizes in the September cartoon caption contest with this line that gives a new function to the Portland Head lighthouse on this 2013 stamp. The next contest will be announced in Linn's Nov. 10 issue.

Picture yourself looking out over the water from the top of a lighthouse, such as the structure shown on the Portland Head Lighthouse stamp issued as part of the 2013 New England Coastal Lighthouses set.

That particular stamp was used for the September cartoon caption contest.

Of the hundred or so readers who took the challenge, some remarkably similar themes based in popular culture were used by many entries.

The musical On A Clear Day You Can See Forever was translated by reader Bill Kriebel of Philadelphia, Pa., to "On a clear day, I'm not necessary!"

The song title You Light Up My Life was used by several entries, alone and in context, such as "My job as lighthouse keeper keeps me singing, ‘You light up my life,'" from Thomas Misiewicz from Martinsburg, W.Va.

"It's lonely at the top," a common bit of societal wisdom, was used multiple times; the first to arrive was from Michael Cochran of Libertyville, Ill.

Another song, one originally relating to sails, was converted to comment on a New England sports team by Richard Herman of Lido Beach, N.Y., whose entry was "Red Sox in the sunset …"

The most popular theme was based in the parallel between housekeeping and the stamp. This is typified by the entry from Robert North of Van Nuys, Calif.: "But the ad said, ‘Easy job. Only a little light house keeping involved.'"

The daily trip to empty the mailbox was the second most popular theme. This entry is from Arnie Fenske of Eldon, Mo.: "I don't care what you say, it's your turn to walk down and get the mail!"

The nonphilatelic winner, shown here with the Lighthouse stamp, casts the lighthouse in a completely different role. It is from Charles Vukotich, sent in via e-mail.

On the philatelic side, Howard Banks, who also submitted by e-mail, came up with "I knew becoming a lighthouse attendant was a longterm commitment, but forever? Really?"

"You call this a penthouse with a view?" from Boyd DeGeest of Winona, Minn.

"I see a postage rate hike on the horizon," by Steve Kotler of San Francisco, Calif.

"I hope we're high enough up here when the sea of Postal Service red ink hits us," sent by A.J. Zappa of Tucson, Ariz.

"Martha, add 200,000 candles to the shopping list, just in case the power goes out," from Michael Moticha of Apple Valley, Calif.

"Where do I keep my collection of lighthouse stamps and covers? Why in a Lighthouse album, of course!" by Bradley Miller of Huntsville, Ala.

"No, Sarah, you can't see Russia from here!" sent by Emmanuel Atsalinos of Silver Spring, Md.

The next cartoon caption contest will be announced in the Nov. 10 Linn's.