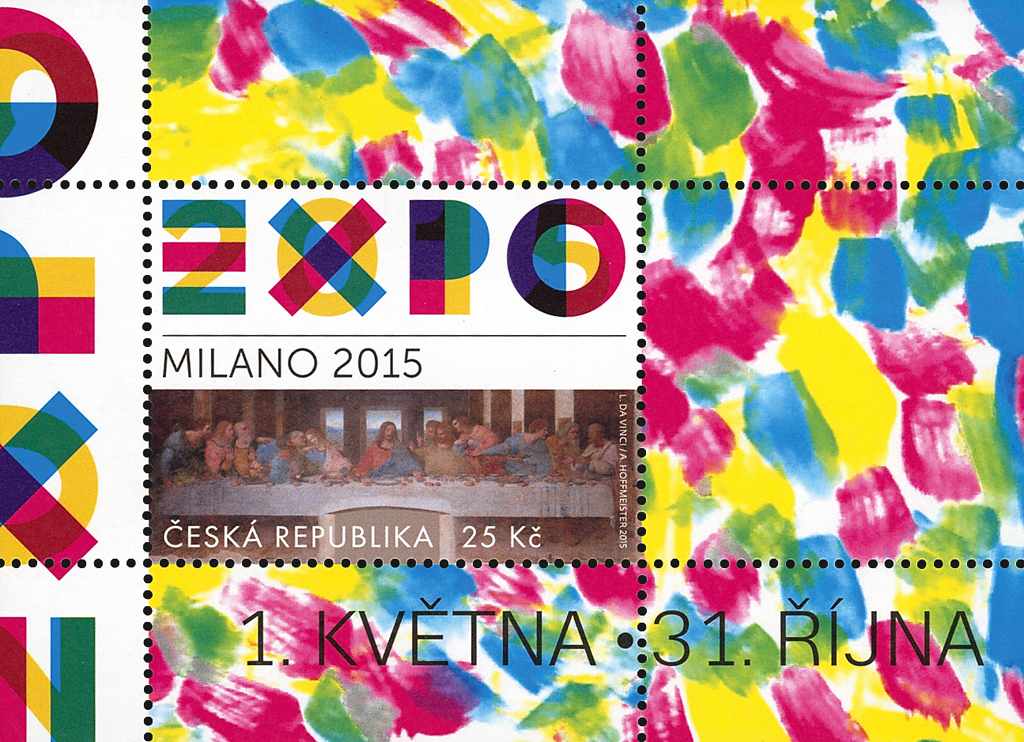 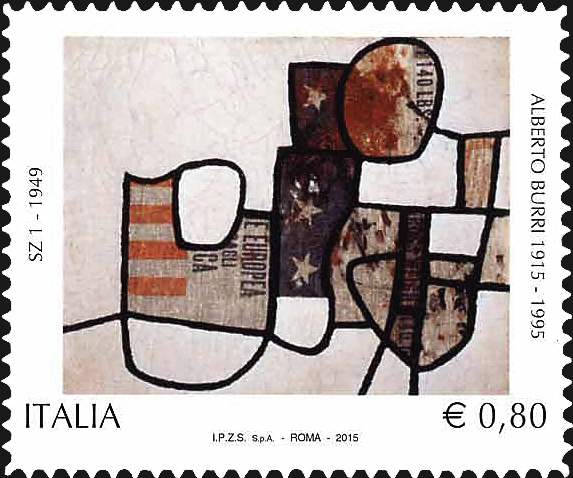 Stars and stripes from the American flag can be seen in the burlap pieces Alberto Burri used in creating SZ 1. Issued March 12, the stamp is part of the Italian Artistic and Cultural Heritage series. 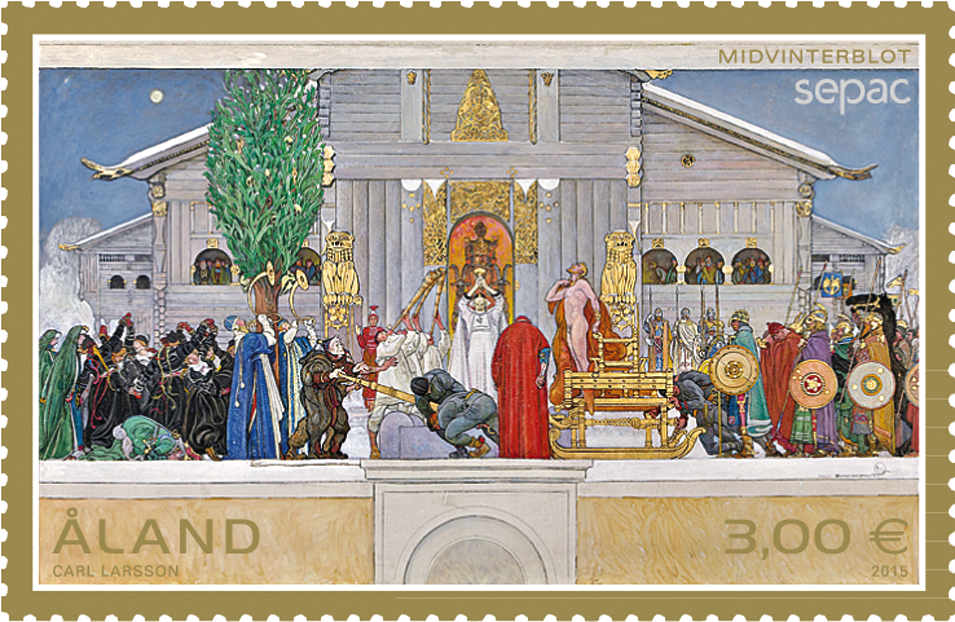 A stamp showing a version of Midvinterblot by Carl Larsson is 62 millimeters by 44mm, making it Aland’s largest stamp.

The best-known version of this painting, often translated to English as “Midwinter Sacrifice,” measures 20 feet by 46 feet.

Completed in 1915, the painting had been commissioned for a wall in the National Museum in Stockholm. However, the museum’s board did not approve of it.

Aland Post said, “The critics considered the painting to be unpalatable, historically incorrect and, finally, even outmoded.”

The website of the Carl and Karlin Larsson Family Association said, “He [Larsson] was bitterly disappointed when his last monumental work, Midvinterblot, which was to have adorned the east wall of the upper stairway in the National Museum in Stockholm, was refused by the committee.”

After changing hands several times, it eventually was sold to a Japanese buyer in 1987. The painting was loaned to the National Museum in 1992 for an exhibition of Larsson’s work and purchased by the museum in 1997.

According to Aland Post, the stamp is based on a smaller version of Midvinterblot that was painted at the same time. Also, unlike its larger counterpart, it is signed.

This smaller painting is part of the art collection of Aland businessman Anders Wiklof and is displayed at his private museum near Mariehamm, the capital.

The painting was inspired by the epic poem Ynglingatal, believed to be more than 1,000 years old.

Aland Post describes the painting as showing “how Swedish king Domalde lets himself be sacrificed in order to avert years of famine.”

The “sepac” in the upper right corner of the design indicates that this stamp is part of the multination series arranged by the Small European Postal Administration Cooperation. Culture is the theme for the 2015 Sepac stamps.

Cartor Security Printing of France printed the stamp by offset in sheets of 12.

Part of the Italian Artistic and Cultural Heritage series, this stamp reproduces SZ 1, painted in 1949 by Burri.

After earning his medical degree in 1940, Burri served as a medic with the Italian army during World War II. He was captured by the Allies in 1943 and sent to a prisoner of war camp in Texas. While there, he began painting using United States mail sacks and other burlap bags as canvases.

He continued to work with burlap and other nontraditional items, including plastic, metal and charred wood, in his works after his release and return to Italy.

In creating SZ 1, Burri used pieces of burlap sacks that American soldiers used to carry sugar to Europe. Stars and stripes from the American flag are visible on the burlap.

The work is part of the collection of the Fondazione Palazzo Albizzini Collezione Burri in Citta di Castello, Italy.

Italy’s security printer printed this self-adhesive stamp by offset in sheets of 25.

One of the world’s most famous paintings, The Last Supper by Leonardo da Vinci, is pictured on a new stamp from the Czech Republic.

This 25-koruna stamp was issued March 18 in a souvenir sheet of one honoring Expo 2015 taking place May 1 through Oct. 31 in Milan, Italy.

On the stamp, the logo of the expo is shown above the painting.

The Czech Republic and approximately 140 other countries will participate in this world exhibition with the theme “Feeding the Planet, Energy for Life.”

Also in 2015, Milan is hosting an exhibition of the works of da Vinci.

Da Vinci completed The Last Supper around 1849. This fresco showing Jesus sharing the Passover meal with his disciples right before his betrayal, arrest and Crucifixion remains in its original location — the refectory wall of the Dominican monastery of Santa Maria delle Grazie in Milan.