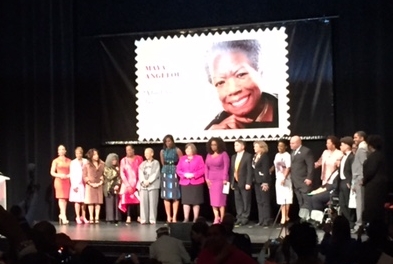 A forever stamp honoring Maya Angelou was welcomed April 7 by a celebrity filled Washington audience that cheered United States Postal Service officials for saluting the poet, but the event dodged a raging controversy over a quotation on the stamp.

There was no mention about the pedigree of the quotation during the stamp’s formal unveiling in front of first lady Michelle Obama, television personality and actress Oprah Winfrey, and 1,600 other guests at the Warner Theater.

But what was left unsaid was that the words — "A bird doesn’t sing because it has an answer, it sings because it has a song" — apparently were not initially Angelou’s words.

Two days before the ceremony, the Washington Post reported that the quotation came from Joan Walsh Anglund, a widely published children's book author.

Postal Service officials initially defended the use of the quotation, citing interviews in which Angelou had repeated the words.

But after the Post reached Anglund, who confirmed the words first appeared in her 1967 book, USPS officials retreated.

Stamp spokesman Mark Saunders said if the Postal Service had known of the Anglund book, another Angelou quotation would have been used on the stamp.

Saunders did note that Angelou often used the quotation, and that President Barack Obama had cited the quote as coming from Angelou when he presented her with the National Medal of Arts in 2014.

Anglund told the Post she was unaware of the quotation being used on the poet’s stamp, but that she admired Angelou and hoped the stamp would be a success.

Whether caused by the publicity or not, the stamp dedication brought an outpouring of media attention.

More than 40 media outlets, including all the major television networks, sent crews to film the dedication.

And the audience, which filled the theater a few blocks from the White House, relished the attention the Postal Service was placing on Angelou.

It was a mixture of a religious and cultural event, all of which one speaker said would have delighted "the little black girl from Stamps, Ark.," who became a world renowned literary icon thanks to her poetry.

"She would get a big kick out of this," agreed Winfrey, who knew Angelou well.

"She was a phenomenal woman," the TV personality said, ending her talk after a power failure plunged the theater into darkness.

The program lasted one hour and 35 minutes, long for most first-day ceremonies. But the audience, which arrived early and cheered the appearance of Winfrey, did not seem bothered by the quote controversy or the power failure.

Postal Service crews were selling the stamps inside the theater's ornate lobby and in a postal sales truck outside the building.