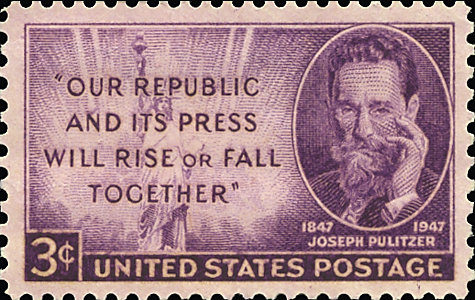 Joseph Pulitzer was born in Mako, Hungary, on April 10, 1847. He immigrated to the United States at age 17 and later became a naturalized U.S. citizen.

After working a series of jobs in New York City he traveled to St. Louis, where he continued to move from one job to another. It was only after he submitted an article to a German-language newspaper in St. Louis that he settled on a career in journalism.

By the time he was in his early 30s, he had purchased the St. Louis Post and the St. Louis Dispatch and merged them to create the St. Louis Post-Dispatch. In 1883 he bought the struggling New York World and boosted its circulation with sensationalized news and features, including dramatic accounts leading up to the Spanish-American War that were characterized as "yellow journalism." He also led a successful editorial effort in 1885 to raise funds to build the pedestal for the Statue of Liberty, collecting more than $100,000 in mostly small donations.

A provision in Pulitzer's will left a bequest to Columbia University that established its Graduate School of Journalism and created the annual writing awards known today as the Pulitzer Prize.