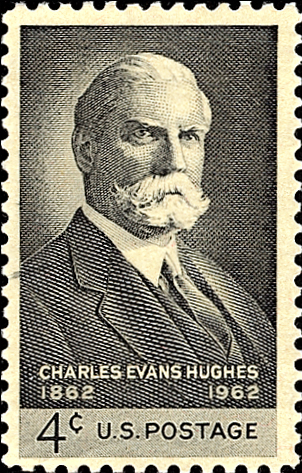 Charles Evans Hughes, born April 11, 1862, was an unsuccessful candidate for president of the United States, but he found tremendous success in other endeavors, serving as governor of New York, as Secretary of State, on the Permanent Court of International Justice at The Hague, and as Chief Justice of the United States.

Born in Glen Falls, N.Y., he studied at Colgate University (when it was named Madison University) and at Brown, and then earned his law degree at Columbia University School of Law.

He served two terms as governor before his first appointment to the Supreme Court in 1910. He resigned six years later to run as the Republican candidate for president, narrowly losing to the incumbent president, Woodrow Wilson.

President Warren G. Harding appointed Hughes as his Secretary of State in 1920, and in 1930, President Herbert Hoover nominated him as Chief Justice.

In 1937, Hughes was at odds with another former New York governor, President Franklin Roosevelt, who unsuccessfully attempted to alter the makeup of the Supreme Court by expanding it with judges supporting his New Deal programs.