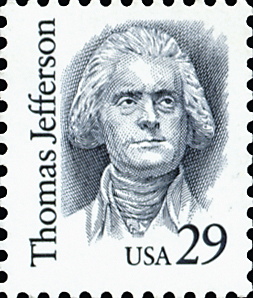 The third president of the United States, Thomas Jefferson, was born April 13, 1743, at Shadwell in Albemarle County, Va.

After completing law school, he entered the lower house of the Virginia colonial legislature in 1769. As a member of the Continental Congress, he drafted the Declaration of Independence at age 33. He also wrote the Bill for Establishing Religious Freedom, which was passed by the Virginia Assembly in 1786. Jefferson counted those two documents among his greatest achievements.

Jefferson married Martha Wayles Skelton in 1772, but she died just 10 years later, four months after the birth of their daughter Lucy Elizabeth.

Jefferson was governor of Virginia from 1779 to 1781, and after serving in France as commissioner and minister, he was named America's first Secretary of State in 1790.

During his first term, the nation acquired a vast western frontier from France in the Louisiana Purchase, often cited as the major achievement of the Jefferson presidency.

Thomas Jefferson has been honored on many U.S. stamps since the first to do so, a 5¢ brown imperforate issue, appeared in 1856 (Scott 12). On the 250th anniversary of Jefferson's birth, he was remembered on a 29¢ definitive stamp in the Great Americans series (Scott 2185). The 1993 stamp was designed by Chris Calle and engraved by Yves Baril.