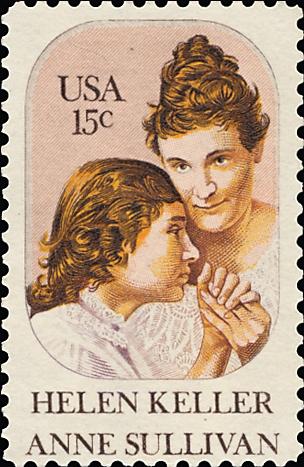 Since early childhood Helen Keller could neither see nor hear, but from the age of six she was guided to understanding the world by the woman she referred to as "teacher," and whom the world came to know as "the Miracle Worker."

Anne Sullivan was born April 14, 1866, in Agawam, Mass., and was just 21 years old when she entered the Keller household as an instructor for young Helen.

Sullivan had herself suffered a debilitating eye disease as a young girl, and had grown up in Tewksbury Almshouse after her mother died and her father abandoned the children. In 1880 she attended Perkins School for the Blind in Watertown, Mass., and there a series of successful operations restored some of her lost sight.

After her graduation from the Perkins School, the director recommended Sullivan as an instructor for Helen when he was contacted by the young girl's parents.

Within a few months Sullivan had helped Helen to understand simple words and their meaning by spelling them out into Helen's palm. The famous first success that helped Helen connect the sensation in her hand with the objects around her was when Sullivan spelled out the word "water" while holding Helen's other hand under running water.

Sullivan remained Helen's companion and teacher for close to 50 years. Near the end of her life, Sullivan again lost her sight, and she died at age 70 in 1936.

A 15¢ stamp issued May 31, 1980, to commemorate Helen Keller's birth centenary (Scott 1824), names both Helen and Anne Sullivan, and shows them together in the vignette.