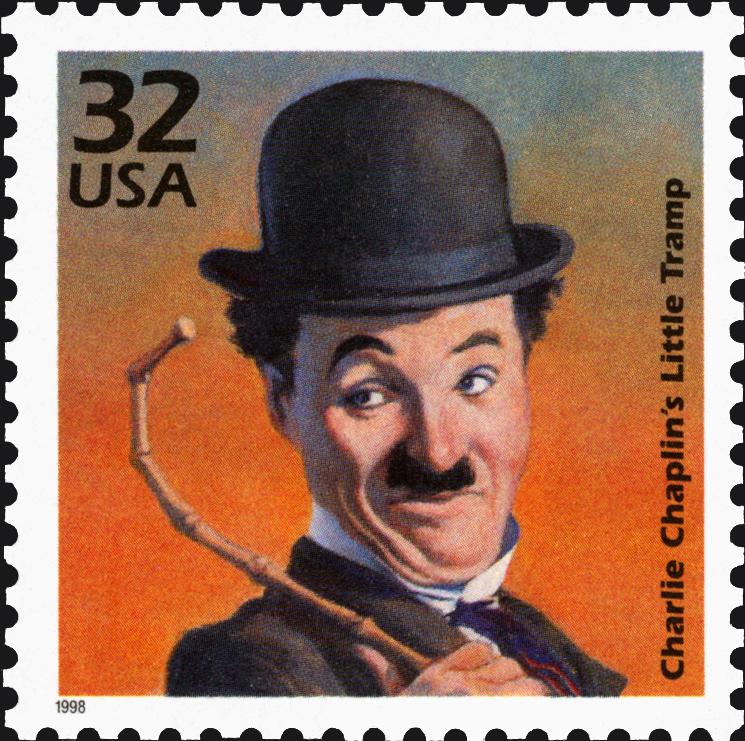 The 29¢ stamp issued in 1994 shows Chaplin in his familiar role as the lovable misfit, the "Little Tramp." The stamp (Scott 2821) is part of a 10-stamp set titled Silent Screen Stars, with illustrations by celebrity portrait artist Al Hirschfeld.

The 1998 issue is from the 150-stamp Celebrate the Century series, in a 15-stamp set commemorating the decade of the 1910s. The 32¢ stamp (Scott 3183a) again shows Chaplin as the famous tramp character.

The reverse side of the later stamp has an inscription that reads, "Charlie Chaplin first assumed his famous costume for the Little Tramp in 1914. The clothes, mustache, cane, and walk came to identify one of the most familiar icons in the history of film."

Born in London, England, on April 16, 1889, Chaplin first arrived in the United States in 1910, touring the vaudeville circuit as part of Fred Karno's comedy troupe. He wound up in Hollywood soon after, signing with Keystone Studios and appearing as the Little Tramp in films such as Kid Auto Races in Venice (1914) and The Tramp (1915).

His quick rise to stardom led to bigger contracts and international fame. In 1919 he formed United Artists studios with Douglas Fairbanks, D.W. Griffith and Mary Pickford, and further established his success with the films The Kid (1921), The Gold Rush (1925) and many others.

Chaplin continued to produce silent films after "talkies" were introduced, including two of his most famous features, City Lights (1931) and Modern Times (1936). The Great Dictator (1940) was his first talking picture.

In 1952 Chaplin moved to Switzerland with his family following McCarthy-era accusations about his politics and his private life. He continued to make films, and was honored with a star on the Hollywood Walk of Fame in 1970. In 1972 he returned to the United States to accept an honorary Oscar, and he was knighted as Sir Charles Spencer Chaplin by Queen Elizabeth II in 1975.