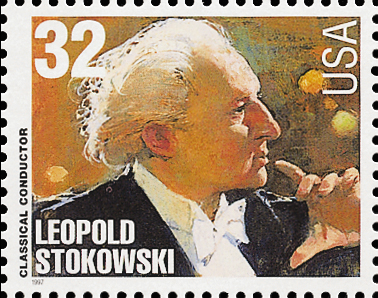 The 32¢ stamp honoring conductor Leopold Stokowski (Scott 3158) was issued Sept. 12, 1997, in the eight-stamp Classical Composers and Conductors set of the American Music series.

The first-day ceremony for the stamp set was held in Cincinnati, Ohio, where Stokowski led his first orchestra, the Cincinnati Symphony, in 1909.

He conducted for the Philadelphia Symphony for a quarter-century, and in 1941 gained a new audience with his contributions to the Disney animated musical film Fantasia. During that time he also created the All-American Youth Orchestra.

Stokowski was co-conductor of the New York Philharmonic from 1949-50, and musical director of the Houston Symphony from 1955 to 1960.

He was an influential conductor known as an advocate for new music, and worked creating music and recording until his death in 1977 at age 95.