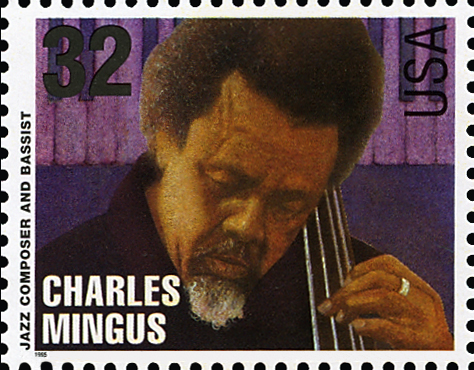 Charles Mingus was a jazz innovator and one of the most respected double bass players of his time. He was a musician, composer, arranger, bandleader and teacher, but he also used his music to comment on civil rights, racial discrimination and other issues.

Born April 22, 1922, in Nogales, Ariz., Mingus was drawn to jazz after growing up with church music and hearing the recordings of Duke Ellington. He began playing jazz professionally in California while still in his teens, eventually performing with Ellington, Louis Armstrong, Dinah Washington, Charlie Parker, Miles Davis and many others.

He led his own bands beginning in the 1940s and founded a jazz workshop in the 1950s. All the while he was touring and recording, and composing more than 300 works, such as Pithecanthropus Erectus, Goodbye Pork Pie Hat and Tonight at Noon.

In the 1970s, Mingus was diagnosed with amyotrophic lateral sclerosis. In 1978, singer Joni Mitchell wrote lyrics for some of Mingus' last compositions, including A Chair in the Sky, which were recorded on her own album, Mingus.

Mingus died at age 56 in 1979. In 1993, the Library of Congress obtained a collection of original manuscripts, scores, recordings and other material related to Charles Mingus.

A 32¢ stamp honoring Mingus (Scott 2989) was issued Sept. 16, 1995, as part of the Jazz Musicians set in the Legends of American Music commemorative series.