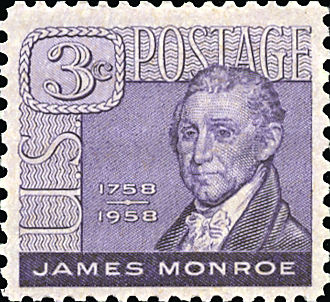 The fifth president of the United States, James Monroe, was born April 28, 1758, in Westmoreland County, Virginia.

He attended the College of William and Mary, but left school to join the Continental Army in the war for independence. Seriously wounded at the Battle of Trenton on Dec. 26, 1776, Monroe would see no further action in the Revolutionary War.

Though he was already a young plantation owner, he studied law under Thomas Jefferson and was elected to the Congress of the Confederation in 1783.

Monroe served as U.S. Senator from Virginia from 1790 to 1794, when he became the U.S. minister to France, and later, the United Kingdom. He was instrumental in concluding the Louisiana Purchase under the administration of President Jefferson.

Before his election as president, Monroe also served as governor of Virginia, U.S. secretary of state, and secretary of war.

He became president in 1817 and extended America's borders with the Treaty of 1818, the acquisition of Florida and the Treaty of 1819. Although the young nation suffered economic setbacks, Monroe was re-elected in 1820.

The implementation of the Monroe Doctrine in 1823 prohibited intervention by European nations in the Americas, opening avenues of independence for many Latin American colonies.

The first stamp honoring James Monroe was a 3¢ commemorative issued April 30, 1904, as part of the Louisiana Purchase Exposition Issue (Scott 325).

Among the many other stamps honoring Monroe is a 3¢ commemorative issued April 28, 1958, to mark the bicentennial of his birth (Scott 1105).