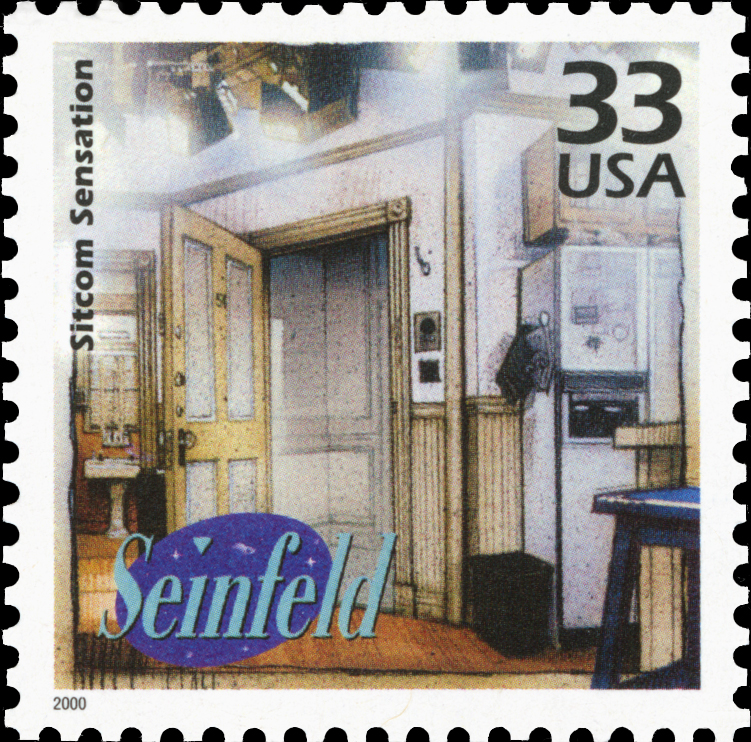 A 33¢ stamp in the Celebrate the Century series pays tribute to the Seinfeld TV series. The show's star and co-creator, Jerry Seinfeld, was born April 29, 1954.

One unusual aspect of the 150-stamp Celebrate the Century series that was issued between 1998 and 2000 is that some of the stamps issued late in the series paid tribute to individuals who were then still alive.

The United States Postal Service took some pains not to picture living people on these stamps, but the 33¢ stamp showing the set of the television series Seinfeld and showing the name Seinfeld on the front (Scott 3191c) was still considered quite an honor by the show's star and co-creator, Jerry Seinfeld.

When the stamp was issued, Seinfeld told Linn's Stamp News, "I'm frankly kind of overwhelmed by it. I think it is really one of the most special honors we've ever had."

On the back of the stamp is printed this description of the show: "A New York stand-up comic and his eccentric friends entertained viewers for nine seasons on 'Seinfeld,' an award-winning sitcom 'about nothing' that gave fans an offbeat and hilarious look at city life."

Jerry Seinfeld was born in Brooklyn, N.Y., and worked as a successful stand-up comic for a dozen years before Seinfeld debuted on the NBC television network July 5, 1989.

Seinfeld continues to work as a stand-up comedian, and has appeared as a guest on numerous television series and talk shows.