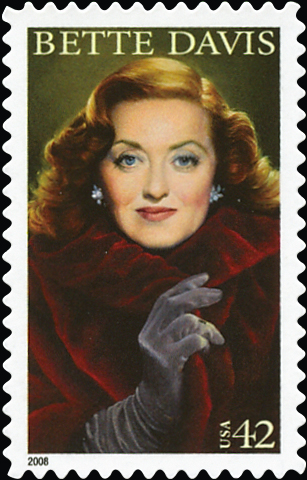 Actress Bette Davis was born Ruth Elizabeth Davis on April 5, 1908, in Lowell, Mass. Though known primarily for her film performances, Davis began her career as a stage actress with experience on Broadway before her 1930 move to Hollywood.

During the 1930s she appeared in films for Universal Studios and RKO before signing a contract with Warner Bros. There she was featured in Three on a Match (1933), an early vehicle for Humphrey Bogart that also starred Joan Blondell.

But it was another RKO film, Of Human Bondage (1934), that brought her fame and led to more starring roles. She won the best actress Oscar for the 1935 drama Dangerous, the first of her 10 nominations and two wins. She also took home the Oscar for her performance in the 1938 film Jezebel.

Throughout her career she was known for playing independent and sometimes scheming characters, but her roles ranged from Queen Elizabeth in The Private Lives of Elizabeth and Essex in 1939, to demented recluse Charlotte Hollis in Hush ... Hush, Sweet Charlotte in 1964.

She continued acting until her death in 1989. Over the years she received many awards, including the Golden Globe-Cecil B. DeMille Award for Lifetime Achievement in 1974, the American Film Institute's Life Achievement Award in 1977, and the Distinguished Civilian Service Medal in 1980 (recognizing her contributions to support and entertain military personnel beginning in World War II).

Davis was featured on a 42¢ stamp in the Legends of Hollywood commemorative series in 2008 (Scott 4350).