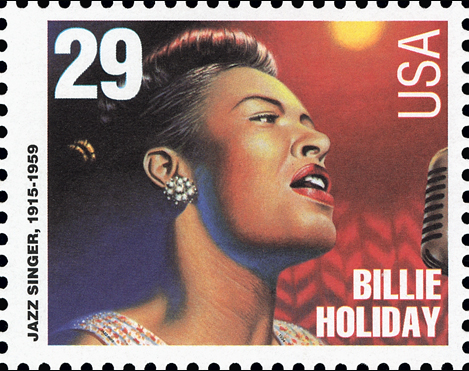 Today marks the 100th birthday of jazz singer Billie Holiday. She was commemorated on a United States stamp in 1994.

Today marks the 100th anniversary of the birth of Billie Holiday, the legendary jazz singer and songwriter whose work extended into pop, torch ballads, blues and more.

Born Eleanora Fagan in Philadelphia, Pa., on April 7, 1915, Holiday survived a harrowing childhood and began singing in clubs when she was 15. She was discovered by producer John Hammond, who recorded her with Benny Goodman and his band while Holiday was still in her teens.

She began performing in New York night clubs and appeared at the Apollo Theater, the famous Harlem music hall. Many of her successful records were made with Hammond and saxophonist Lester Young. She performed with popular orchestras, including the great Count Basie. Though influenced by Louis Armstrong and Bessie Smith, her light and melancholy voice contributed to a sound that was distinctly her own.

Known popularly as "Lady Day," Holiday released a number of popular hits, including "Strange Fruit" in 1939, "Gloomy Sunday" and "God Bless the Child" in 1941, and "Lady Sings the Blues" in 1956. The last two were songs written by Holiday with collaborators, but she also recorded music by top songwriters such as Jerome Kern and Dorothy Fields, George and Ira Gershwin, Irving Berlin, and others.

Billie Holiday's health suffered from years of drinking and drug abuse, and she died in a New York hospital in 1959.

She received the Grammy Lifetime Achievement Award in 1987, and was inducted into the Rock and Roll Hall of Fame in 2000.

The 29¢ Billie Holiday stamp issued Sept. 17, 1994 (Scott 2856) shows the singer in a portrait by Howard Koslow, based on a photograph by William P. Gottlieb. The commemorative stamp is from the Jazz and Blues Singers set of the American Music series.