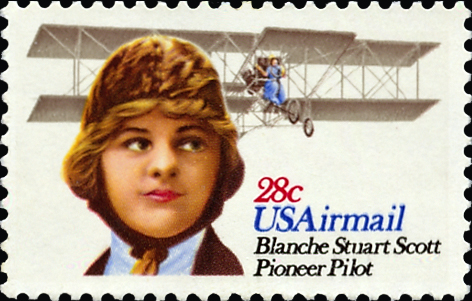 Scott was probably the first woman in history to pilot a solo flight, but the records of who flew solo first — Scott or Wisconsin businesswoman Bessica Raiche — are inconclusive. Raiche flew her homemade craft on Sept. 16, 1910; the date of Scott's flight is believed to be earlier in the same month, but the documentation has been lost.

In its description of the 28¢ airmail stamp honoring Scott issued in 1980 (Scott C99), the United States Postal Service didn't equivocate, however, describing her as "a pioneer pilot and the first American woman to make a solo flight."

Scott was often described as a tomboy and a daredevil, driving an automobile around Rochester at age 13. At age 21 she drove cross-country from New York to San Francisco in a little over two months, accompanied only by a female journalist who didn't drive.

Scott retired from her flying career in 1916, and worked in radio and as a filmwriter. She later became a consultant for the U.S. Air Force Museum at Wright Patterson Air Force Base in Ohio.