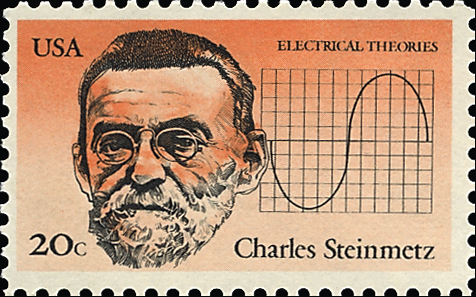 Charles Proteus Steinmetz, born 150 years ago on April 9, 1865, was a prominent industrial scientist who made huge advances in the understanding and development of electrical engineering, the alternating current and high voltage power.

He was born Carl August Rudolph Steinmetz in the German kingdom of Prussia, in a region that is now part of Western Poland. While contending with physical challenges that included dwarfism and hunchback, he was a brilliant student of mathematics and chemistry at the University of Breslau. He left for Switzerland in 1888, studying at the Polytechnic in Zurich, and moved permanently to the United States the following year.

Steinmetz began working as a researcher at the Osterheld and Eickemeyer factory in Yonkers, N.Y. When the company was bought by General Electric in 1892 he became a chief consulting engineer for GE in Schenectady. He lobbied for the creation of a new research laboratory and conducted research in many areas, including hysterisis, described by the Schenectady Museum as "the power lost in an electrical system due to the nature of the conducting material."

Steinmetz was president of the American Institute of Electrical Engineers from 1901-02, and received the Elliott Cresson gold medal from the Franklin Institute.

A 20¢ Charles Steinmetz commemorative stamp was issued Sept. 21, 1983 (Scott 2055), part of a set of four stamps honoring American Inventors. The stamps were issued at the U.S. Patent and Trademark Office in Washington, D.C., which houses the National Inventors Hall of Fame.