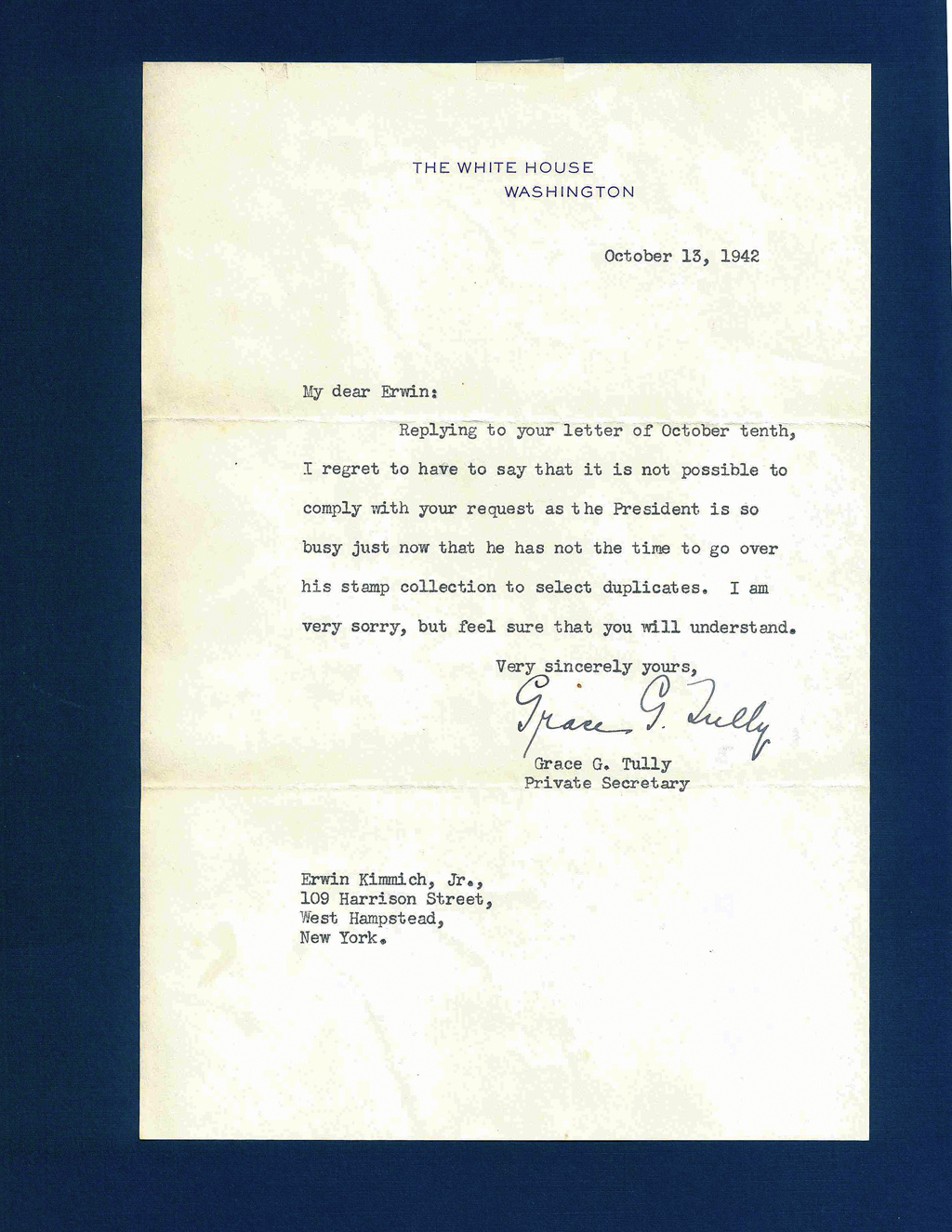 One of President Franklin D. Roosevelt’s secretaries, Grace G. Tully, wrote this charming letter to a collector in 1942, informing him that FDR was too “busy” with the affairs of state to send him stamps from his collection.

Every now and then someone who shares our hobby demonstrates that they have lost their perspective when it comes to stamp collecting.

I am confident that such loss of perspective does not occur too often, but I recently acquired a letter that exceeds anything I have ever before encountered.

I am a historian by background and a longtime collector of congressional free franks from the 18th and 19th centuries. I also collect historical documents, or sometimes documents that just amuse or interest me.

I was recently the successful bidder in an eBay auction in which I acquired a letter that was written and signed by Grace Tully, President Franklin D. Roosevelt’s private secretary.

Ms. Tully had been in the Roosevelt orbit for many years, having started as an assistant to Eleanor Roosevelt in 1928. She then worked for FDR when he served as governor of New York and moved to Washington, D.C., in 1933 when Roosevelt moved into the White House.

Initially, she was not his primary secretary, that position being occupied by Missy LeHand. Tully took dictation from FDR and did much of his typing.

But LeHand suffered a stroke in 1941, and Tully became Roosevelt’s primary secretary. It was in this capacity that she answered the letter sent to FDR by one Erwin Kimmich Jr.

It is apparent from the context of the letter that Kimmich and Roosevelt had known each other, probably in the fray of New York politics, because Tully addresses him as “My dear Erwin.”

The date on Tully’s letter is Oct. 13, 1942, so Kimmich probably wrote to the president a week or two earlier.

I do not have Kimmich’s letter, nor can I find a reference to him in any of the online search engines, but it is quite clear that Kimmich had written Roosevelt — perhaps the most famous stamp collector of all time — and asked him to go through his collection and select some stamps for Kimmich’s collection.

We can’t tell whether Kimmich wanted to trade with the president, purchase stamps from him, or have FDR give him the stamps, but Tully’s response is priceless: “ ... the President is so busy right now that he has not time to go over his stamp collection to select duplicates.”

“Busy” was an understatement. FDR was commander-in-chief of the ground, naval and air forces of the United States.

The United States was about to land forces in North Africa to begin the process of defeating Nazi Germany; American forces in the Philippines had only six months earlier surrendered Corregidor — the last American bastion in the islands — to the Japanese; and the invasion of the continent of Europe was still almost 20 months away.

We were in desperate times as a country, and Erwin Kimmich thought that President Roosevelt should take time away from his duties to go through his stamp collection and “select duplicates.”

I laughed so hard I cried when I saw this letter offered on eBay, and I just had to have it. I love stamp collecting as much as anyone, but I believe I just encountered a new height of chutzpah.

James T. Currie has collected stamps since he was nine years old and currently specializes in 18th- and 19th-century congressional free franks. He also collects historical letters whose author or content interests him.