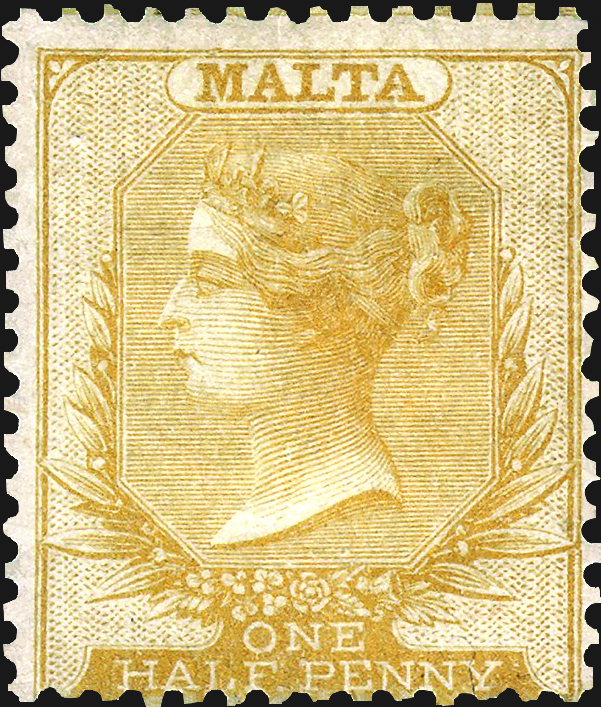 Malta’s first stamp, in 1860, was permitted for use only on letters mailed between the several islands of the country.
Image courtesy of Liane and Sergio Sismondo.

The country known as Malta is an archipelago in the center of the Mediterranean Sea, south of Sicily. It comprises three inhabited islands (Malta, Gozo and Comino) and several named but uninhabited islets.

Malta’s history spans more than 7,000 years, but its known postal history is somewhat newer: around the 16th century, when Malta was part of the Kingdom of Sicily and mail was traveling by private ship between the islands and Sicily.

Malta joined the British Empire as a result of the Treaty of Paris in 1814. England set up an overseas post office there by mid-century, and began supplying British stamps in August 1857.

As of March 1, 1858, outgoing mail from Malta to any part of the United Kingdom had to be prepaid in full, but the only way now to identify mail that had originated in Malta is by the postal marking on the British stamps: either a capital “M” or “A25.”

Then, in 1859 postal officials decided to reduce the local (inland) postal letter rate to ½-penny per half-ounce, plus ½d for each additional half-ounce or fraction thereof.

There was no current British stamp in that denomination, so a contract was given to Thomas De La Rue & Co. in London to produce what would be Malta’s first, and indeed only, postage stamp design until 1885. The first issue appears as Scott 2 in the Scott Classic Specialized Catalogue of Stamps and Covers, 1840-1940.

John T. Easton, in his 1958 book, The De La Rue History of British & Foreign Postage Stamps, 1855 to 1901, states that the company’s day book entry of July 21, 1859, mentions an invoice for £100 “for a die and a plate of 240 multiples.” The day book entry indicates that the order for stamps was received on April 30 of that year, and that the stamp paper was purchased from Chafford Mill, in Kent.

The initial printing was for 24,000 stamps, unwatermarked and perforated gauge 14.

The first issue of Malta is usually known as the Half-Penny Yellow (called buff in the Scott catalogs), but over the course of at least 28 different printings between 1859 and 1884, many shades of yellow and orange and brownish tints exist to challenge today’s specialist collectors of Malta.

Easton’s history of De La Rue explains, “The yellow singly-fugitive ink selected for this stamp was rarely used by De La Rue for stamp printing and was evidently a source of trouble.”

Presumably the July 1859 De La Rue invoice accompanied the first shipment of stamps, but they were not put on sale in Malta until Dec. 1, 1860. The authorities in the capital, Valletta, spent the interim period setting up a postal infrastructure that had been lacking in Malta.

Letterboxes were placed in various locations in Valletta, and as of Dec. 1, 1860, “properly and clearly addressed letters placed in such boxes will be treated in every respect as if posted at the General Post Office (British Post Office), provided such letters, if destined for the Inland Post, bear the Malta Halfpenny Stamp, in proportion to their weight.”

This notice, written on behalf of the governor of Malta and dated Nov. 16, 1860, stated that the new stamps could be purchased at the post office, “at the police stations, and at the principal stationers’ shops.” The message concluded by advising that the stamps could not be used on any letters “intended to be forwarded to any place beyond the islands of Gozo and Malta,” and any letters not intended for those places and found with local stamps on them would be considered unpaid.

On Jan. 1, 1885, control of the postal administration in Malta was transferred from London to local authorities, and a new series of definitive stamps was prepared (Scott 8-13). The design of the original 1860 stamp was retained for the low denomination of the new series, but the Half-Penny Yellow became green.

Easton’s history of De La Rue states that the first consignment of the yellow half-penny stamp was for 24,000 stamps shipped and invoiced on July 21, 1859. The 2015 Scott Classic Specialized catalog values mint copies of Scott 2 at $1,300 and used at $650. Examples on cover are seldom seen, with an estimated catalog value of $2,400.

But, perhaps this is not so surprising. These were strictly local stamps, and after all, Malta was and is a very small country.