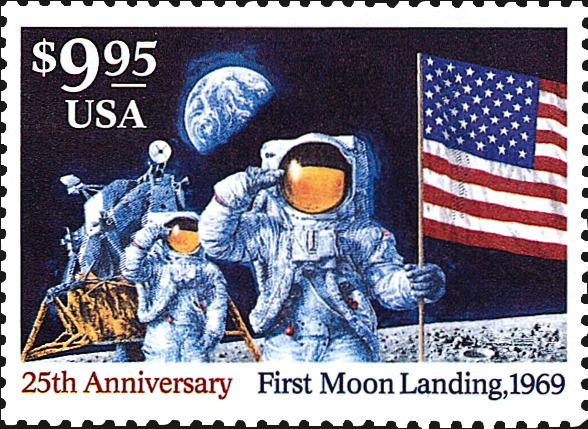 In 1994, the U.S. Postal Service issued this $9.95 Express Mail stamp picturing two astronauts on the surface of the moon saluting the U.S. flag. Proper in-period uses can be a challenge to find. 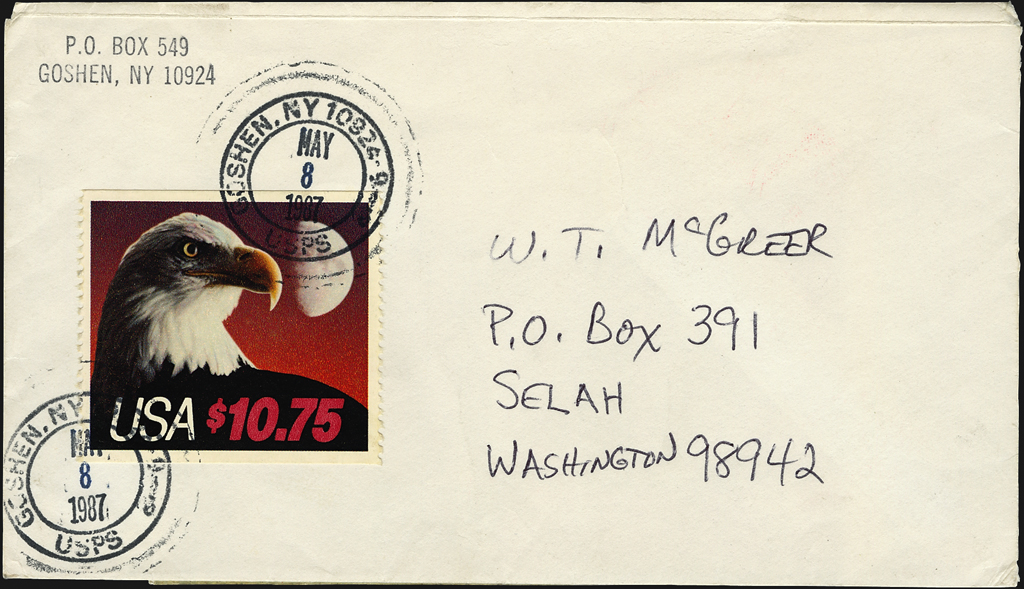 In 1983, the U.S. Postal Service issued its first stamp specifically for Express Mail service. The $9.35 stamp features a bold design portraying a bald eagle and the moon. 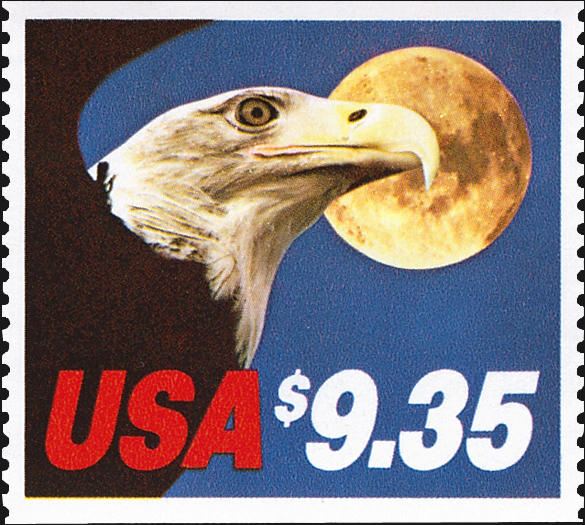 The $10.75 Eagle and Moon on this otherwise unassuming cover mailed in 1987 from New York to Washington was used to pay the basic Express Mail rate. The Express Mail label was affixed to the back and folded to facilitate ease of handling.

Among the more eye-catching United States postage stamps with high denominations are those that have been issued to pay basic rates for Express Mail service.

Although issued for a specific purpose, these stamps could be used to pay postage for any type of mailing.

This month, I take a look at some of the early Express Mail stamps. Later issues will be discussed in a future column.

In 1983, the U.S. Postal Service issued its first Express Mail stamp. The bold design of the $9.35 stamp (Scott 1909) pictures  a profile of a bald eagle in the left foreground, with the moon partially obscured by the bird’s beak in the background.

This oversize stamp has long been one of my favorites. It was sold in booklet panes of three stamps. A pane is valued at $57.50 in the Scott Specialized Catalogue of United States Stamps and Covers.

A $10.75 Express Mail stamp with a similar design featuring a bald eagle and the moon was released in 1985, Scott 2122. It also was issued in booklet panes of three.

Among the more unusual uses of the $10.75 Express Mail stamp that I have come across is a single stamp on a No. 6¾-size envelope mailed in May 1987 from Goshen, N.Y., to Selah, Wash.

Note that the sender did not use the standard Express Mail envelope available from the Postal Service.

Because of this, the mailing label was affixed to the back and folded, accordion style, to facilitate handling and delivery. Docketing on the label indicates that delivery was made May 11, 1987, three days after it was mailed.

I acquired this nifty cover in 2006, and I’ve yet to encounter another one like it.

The $14 Eagle was issued to satisfy an international Express Mail rate. Proper on-cover uses of this stamp are somewhat uncommon.

On July 20, 1994, to commemorate the 25th anniversary of the Apollo 11 moon landing, the USPS issued an attractive $9.95 stamp showing two astronauts on the surface of the moon saluting the U.S. flag (Scott 2842).

If you seek a challenge, try finding a correct, in-period use of the $9.95 Moon Landing stamp on an Express Mail envelope. The basic domestic rate jumped to $10.75 Jan. 1, 1995, so the $9.95 stamp had a period of stand-alone use of slightly more than five months.

In 1995, the space shuttle made its debut on a $10.75 Express Mail stamp (Scott 2544A). The design depicts a shuttle just seconds after liftoff, streams of fire shooting from the main engines and from the booster rockets attached to the external fuel tank.