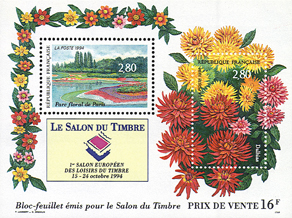 The author missed the Salon du Timbre show during his most recent visit to Paris. France has issued a number of stamps for the show, including this 1994 souvenir sheet (Scott 2444). 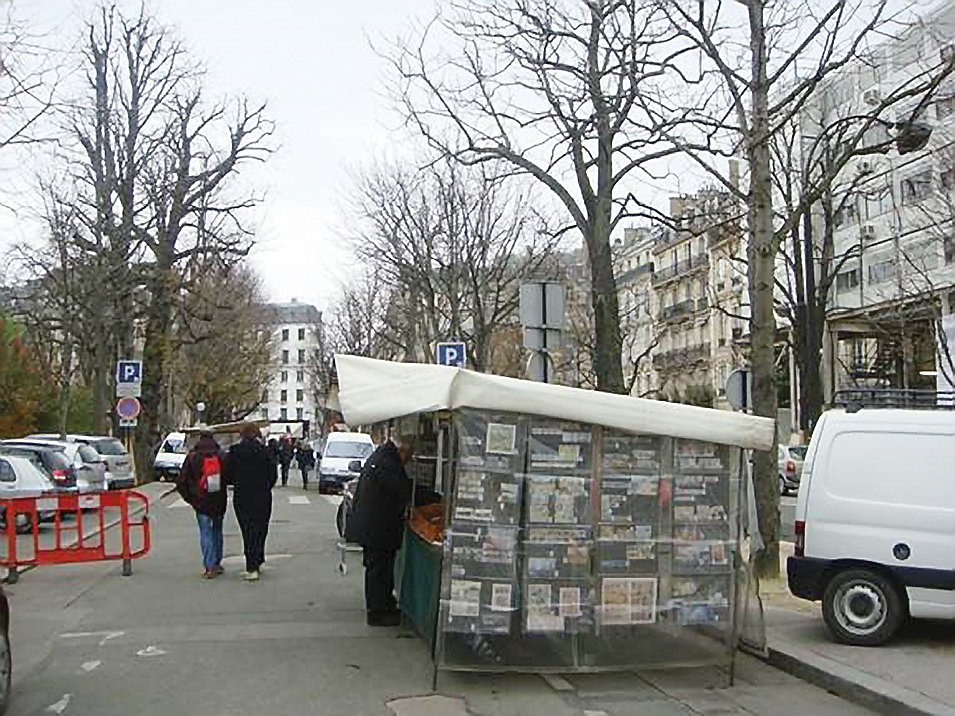 If you enjoy open-air stamp markets, be sure to visit Le Carre Maringy in Paris. You are sure to find something to your liking. 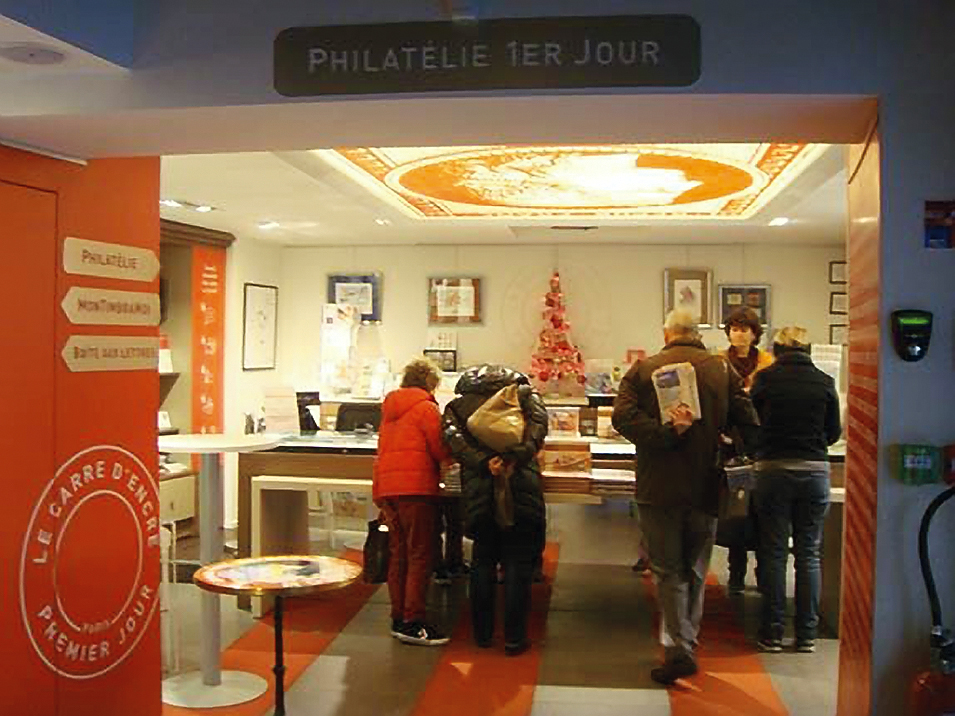 The Le Carre d’Encre store in Paris has a well-stocked philatelic counter. It provided an unmatched shopping experience for the author. 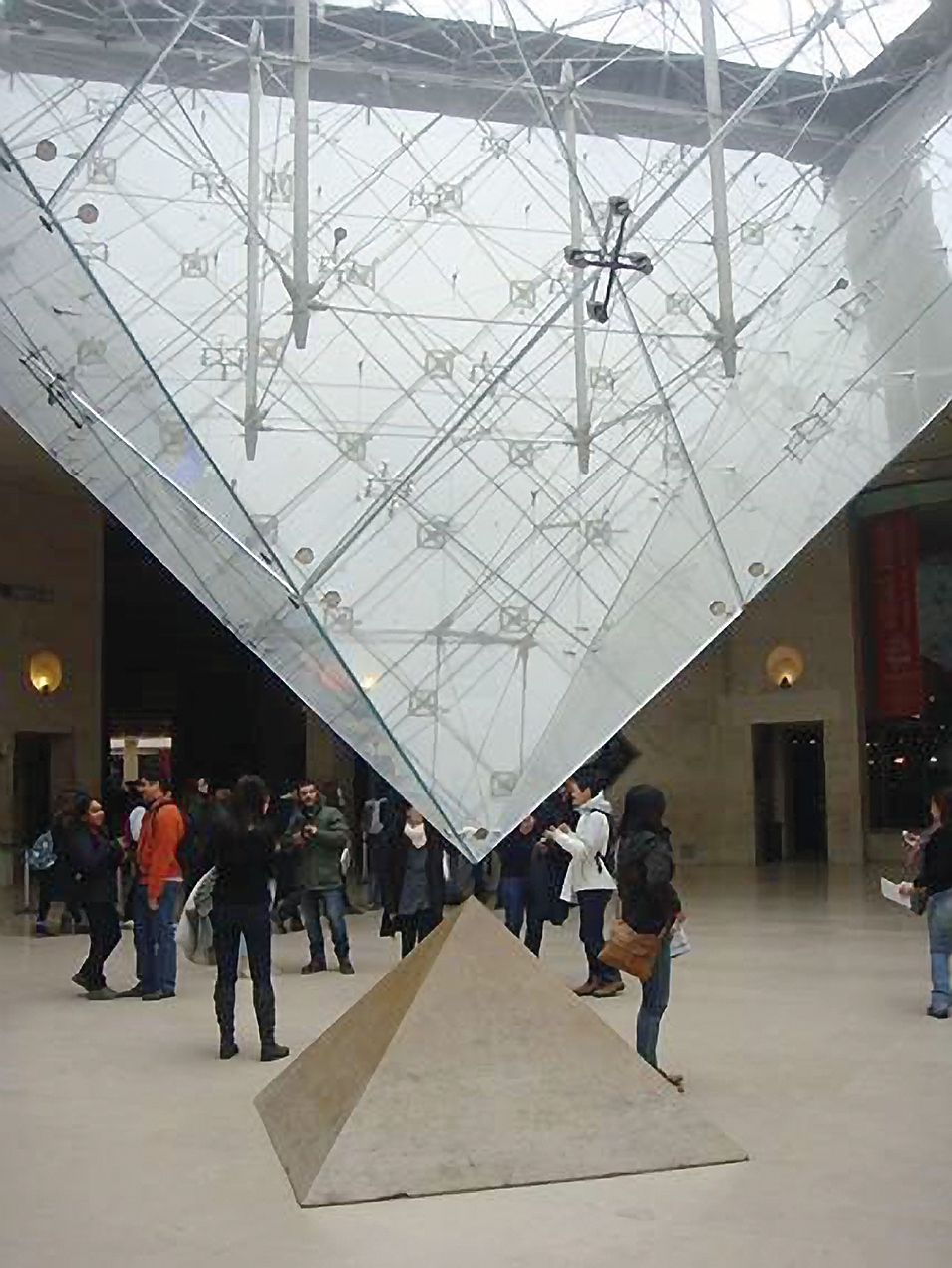 The post office is next to the inverted glass pyramid in the underground mall inside the Louvre. A friendly clerk at this post office helped the author find stamps for his collection. 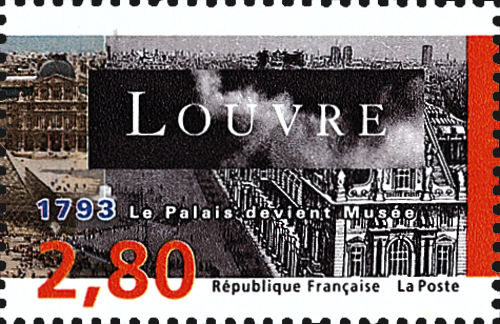 France issued this stamp in 1993 to celebrate the bicentennial of the Louvre (Scott 2396), the famous museum in the center of Paris. 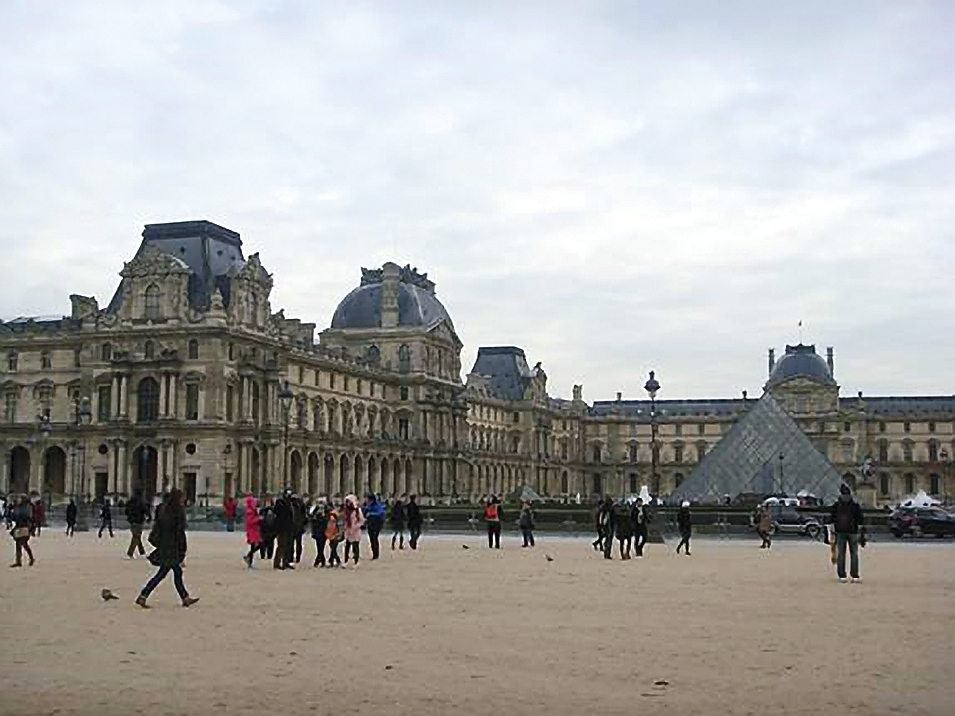 The Louvre Museum in Paris, once home to monarchs, is now a famous museum. It also boasts a below-ground post office.

As the capital of France, the charming city of Paris has much to offer.

For stamp collectors, many philatelic events and exhibitions are held in Paris regularly, most notably the biannual Paris Salon du Timbre.

Besides special events, the city offers several philatelic sites that are open year round. During my most recent trip to Paris, I happened to miss “Le Salon du Timbre” by a week. Nonetheless, my continuing quest for stamps was fulfilled by some new discoveries.

Situated right in the center of Paris, the Louvre Museum is one of the most popular tourist attractions.

The Louvre used to be the former palace for the French monarch, but it has been a museum open to the public for more than 200 years.

Many tourists pay their homage to see the world-famous art pieces housed in the museum such as Leonardo da Vinci’s Mona Lisa.

Others come to see its splendid architecture, mixed with the modern glass pyramid entrance and the museum renovation by Chinese-American architect I.M. Pei.

As you enter the glass pyramid, you immediately descend into the busy hall under the palace structure.

Just before entering the museum, visitors admire an inverted, yet not connected glass pyramid near the grand pedestrian mall at the concourse level.

The French post office (La Poste) has a large branch just next to the famous inverted pyramid.

The post office has the advantage of being open much longer than other post offices. It is advertised to be open 24 hours a day, year round.

Since my first visit 18 years ago, I have visited this post office during each trip to Paris, and I have never seen it closed, even on a Sunday.

Despite its convenient location and long hours, the post office is very open and welcoming. The postal agents assist with all customers’ postal needs at an open countertop instead of lines in front of postal windows.

Because of its prime location, you would expect many tourists conveniently mailing postcards and packages home after their shopping experiences.

The post office also carries most recent stamp issues, in addition to definitive stamps for postal use. However, there is no dedicated philatelic counter.

The very friendly and helpful postal agent patiently helped me obtain one of each new stamp issue from his stock books. It was there when I first learned about the specialized philatelic store Le Carre d’Encre, which I visited next.

This charming and dazzling boutique shop is run by La Poste and sells practically all the philatelic products available, stamp-collecting accessories, and many other stationery and letter-writing items.

The boutique is densely packed with display and stock items that are rarely seen at post office stores.

When you enter the shop, the stationery section overwhelms, with many eye-catching items that can confuse your direction and orientation. It was hard to imagine that this was run by the French post office.

There is a walled corner that displays and sells rack after rack of mint panes (mostly panes of 50) of recent French stamps.

Down the hall in the store, I was excited to find a dedicated philatelic counter that displays and sells recent stamps from France and other French territories such as French Polynesia, Andorra, St. Pierre and Miquelon, and French Southern and Antarctic Territories — all at face value.

I have been collecting French stamps since I was a teenager studying abroad in France, and am familiar with most La Poste philatelic products.

However, I was amazed to find some unusual first-day covers that are not sold by La Poste online (www.laposte.fr).

Luckily, this store accepts major credit cards, because stamp enthusiasts like me can easily overspend their budget!

Store hours are Monday to Saturday 10 a.m. to 7 p.m. More information is availabale at the store's website.

It was an easy walk from Franklin D. Roosevelt Metro station near the Champs-Elysees, also one of the main tourist attractions. From there, off the Avenue Gabriel, the short walk through a quieter residential section of downtown Paris was quite a transition from the busy Champs-Elysees.

The market gathering at the square/public park has been a public trading and selling market where dealers and fellow stamp collectors work from temporary booths, foldable tables, tents or sometimes on the back of a truck.

Historically, this location must be very popular, because it appeared in the 1963 film Charade, starring Audrey Hepburn and Cary Grant.

During my visit in cool weather during late November (weather was similar to back home in New York), there were still a dozen or so booths but very few shoppers.

This open market does not seem to be regulated by officials, because the booths appear informal and are highly mobile.

One cannot guarantee the authenticity of rare and valuable stamps, but most of the stamps on display are recent French stamps, covers, philatelic documents and maximum cards.

The stamp vendors are friendly to French speakers, but I was not sure if they spoke English as well. Most vendors welcome shoppers to flip through their boxes of first-day covers and maximum cards on sale for e1 each, and some room for negotiation can be expected.

The box-hunting experiences are similar to those at stamp shows in the United States.

You might be able to find topical and interesting items to fill their collection, but the prerequisite is to not have any expectations.