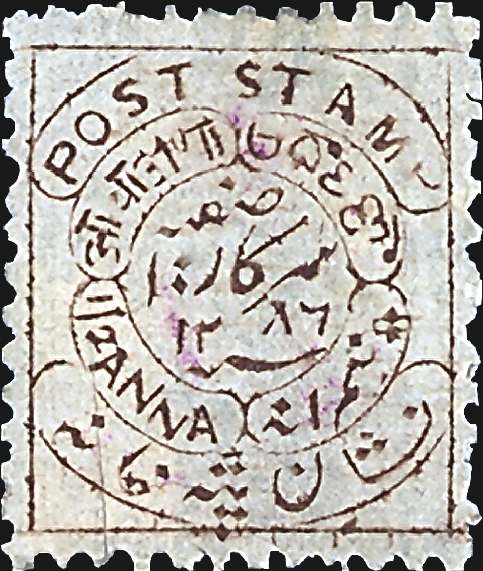 India-Hyderabad Scott 1 of 1870 has a sketchy design but boasts quadruple languages.

Scott 1 of the Indian feudatory state of Hyderabad, according to the Scott Classic Specialized Catalogue of Stamps and Covers 1840-1940, has long been hailed as the first stamp in the world with wording in four different languages.

Scott 1 was printed in brown with a ½-anna denomination. Scott 3, denominated at 2a, used the same design in green.

These stamps were of such rudimentary design that they became known to collectors as the “Skeleton issues.” A more polished and complex version of the original design was issued a few years later, beginning with Scott 4.

For philatelic purposes, a feudatory state referred to Indian native states that maintained their own postal affairs. In contrast, the Indian convention states had postal conventions or treaties with Great Britain, and used contemporary stamps of British India overprinted with the name of each state.

As listed in the Scott Classic Specialized catalog, there were six convention states (Chamba, Faridkot, Gwalior, Jind, Nabha and Patiala). There were far too many feudatory states to list here — depending on which reference you consult, estimates range between 600 to 900 — but only about three dozen of them issued their own stamps. Hyderabad was brought into the Dominion of India in 1948, and its final stamp issue was in 1949.

The word Hyderabad, a name shared by both the Indian princely state and its capital city, means “lion’s city,” and honored Caliph Ali Ibn Abi Talib, reputed to have been a warrior like a lion in battle. Hyderabad the city is located on the Deccan plateau in south-central India, and is sometimes referred to as Deccan or “the Deccan.” Today it lies in the state of Andhra Pradesh.

The city has very old roots, having been founded 1591 by Muhammad Quli Qutb Shah. It declared itself independent of Delhi (then capital of the Mughal Empire) in 1724 and was ruled by a succession of hereditary princes known as the Nizams. Hyderabad accepted British protection by treaty in 1778, further linking with Britain in 1798 as a princely state under the British East India Co. It was one of a handful of Indian states to side with the British in the Mutiny of 1857.

Hyderabad Scott 2, a 1a stamp, was issued in 1869, before Scott 1 and 3, but was insufficient for existing postal needs. According to M.A. Nayeem, a philatelist and historian specializing in Hyderabad, the prevailing postal letter rate was ½a, and thus stamps of ½a and 2a were required. Lacking time to have stamps produced in England, as Scott 2 had been, the two new denominations were designed, engraved and printed in Hyderabad.

The stamps were engraved on copper plates in 16 rows of 15 stamps, for 240 stamps per sheet. Each stamp was engraved individually by hand, resulting in about 240 varieties. Nayeem says they were issued May 16, 1870.

He describes the Skeleton issues as “makeshift,” and it’s true that they resemble a preliminary sketch rather than a finished stamp. The center of the design for both Scott 1 and 3 has an inscription in Arabic characters, “Sarkar-e-Asafia,” which means Government of Asaf Jah (the state of Hyderabad), and the Hijri-era date 1286, corresponding to 1869-70.

Four somewhat bean-shaped forms or labels enclosing the central design contain the denomination in four languages: for example, on the ½a stamp, clockwise from upper left, the labels read “adha anna” in Mahrati, “adha annad” in Telugu, “neem anna” in Urdu, and “½ anna” in English.

The curved label arcing over the top of the stamp reads “Post Stamp,” to distinguish this issue from one that could be used for postage and/or fiscal application. The bottom label is in Urdu, “Nishan-e-Tappa Khanna,” meaning postage stamp.

Forgeries abound of Hyderabad Scott 1 and 3, and discerning originals from fakes is a specialist’s dream or a casual collector’s nightmare, depending on one’s zest for philatelic minutiae.

Hyderabad Scott 3 is not inexpensive: the Scott Classic Specialized catalog prices it at $90 unused and $72.50 used, so buyer beware, and take care. Hyderabad Scott 1 is less expensive: $6 unused, and $6.50 used, and slightly harder to find.