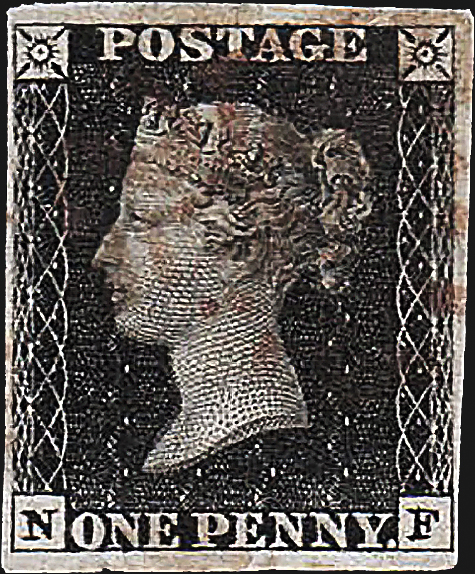 The design of the original Penny Black was the result of a collaborative effort of primarily four people. 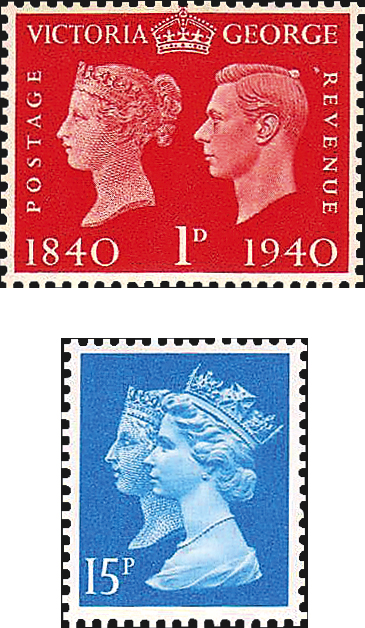 In 1940 for the centenary year of the Penny Black, and in 1990 for the 150th anniversary of the world’s first adhesive postage stamp, a profile of Queen Victoria was combined with the effigies of the current monarchs on British stamps. 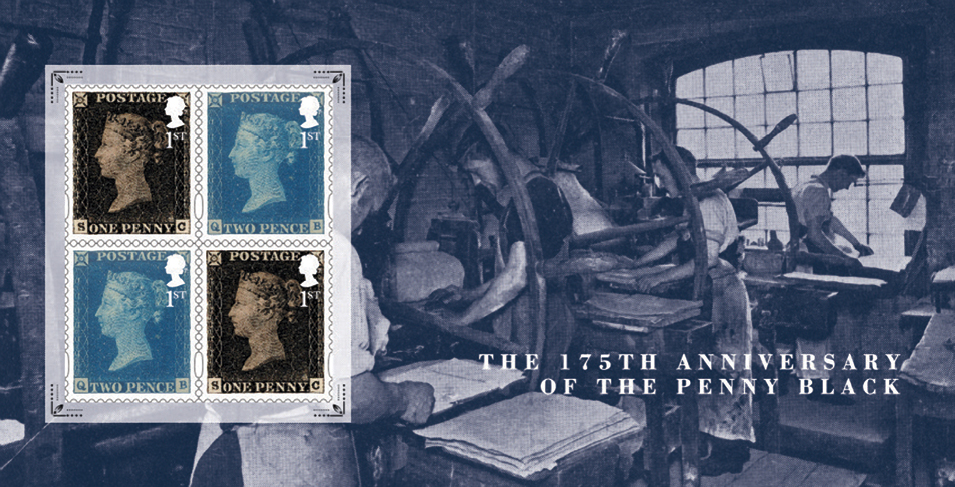 On May 6, Great Britain’s Royal Mail will observe the 175th anniversary of the Penny Black, the world’s first adhesive postage stamp, by issuing this souvenir sheet.

On May 6, Great Britain’s Royal Mail marks the 175th anniversary of the creation of the Penny Black, the world’s first adhesive postage stamp, with the souvenir sheet shown here.

The Penny Black’s sister stamp, the Two-Penny Blue, has also been “refreshed” as a nondenominated first-class stamp. The stamps have water-activated gum.

The sheet provides four postally valid examples of these anniversary stamps. The selvage surrounding them reproduces a photograph of the printing presses that Perkins, Bacon and Petch used in 1840 to print the original stamps.

This is not the first anniversary of the Penny Black that the British post office has marked by issuing special stamps.

In 1940, the centenary year of the first adhesive postage stamp, the post office issued a six-stamp set (Scott 252-257) showing the profile of Queen Victoria next to the profile of the monarch at that time, King George VI.

Here are some lesser known facts about the original Penny Black.

In September 1839, the Treasury solicited suggestions from the public on ways in which the scheme for uniform prepaid postage might be implemented.

The Treasury competition brought in more than 2,600 suggestions for new devices, including envelopes, wafer seals and labels that would indicate postage had been paid at the time of mailing.

None of the designs submitted in the competition was accepted as the final version. Rowland Hill, who was in charge of instituting the changes that accompanied postal reform, reported, “I am not aware that any plan [suggested by competition entries] has been prepared which, however excellent, is, as a whole, fit for adoption.”

In the end, the Penny Black design was produced by the collaborative efforts of Hill; his assistant Henry Cole; J.B. Bacon of the printers Perkins, Bacon and Petch; and well-known miniaturist and book illustrator Henry Corbould.

The four individuals made contributions to the final design of the Penny Black.

Hill likely determined the size and the use of an engraved version of the queen’s image.

Corbould produced the profile drawing of the queen on which the engraving was made.

Cole likely served as coordinator during the development of the final design.

The Penny Blacks were originally called labels, not stamps. An inscription in the margin of every sheet of 240 units reads: “PRICE 1d Per Label … Place the Label Above the Address and towards the RIGHT HAND SIDE of the Letter.”

It was several years after their issue before the term “stamps” became the popular way to refer to adhesive labels applied to mail in receipt for payment of postage.

The engraving for the Penny Black was made by Charles Heath, likely with the assistance of his son Frederick. The engraving was based on a drawing by Henry Corbould of Victoria’s profile on a commemorative medal created by William Wyon.

Wyon’s model for his medal had been a drawing of Princess Victoria at age 15. The portrait of Victoria shown on the Penny Black, therefore, shows her at 15. At that age she was not yet queen.

More than 68 million Penny Blacks were printed. Because, like currency, stamps were considered security printing, that is, they had cash value, detailed records were kept by Perkins, Bacon and Petch of London, the printers.

The company’s records have survived and are currently with the Royal Philatelic Society London. They record meticulous details about the number of sheets printed from each of 11 plates used for the Penny Black stamps.

More than 1 million Penny Blacks are estimated to have survived to the present day; enough for every collector who wants an example to acquire one.

They range in price from affordable to very expensive. Space-fillers, that is examples having no margins or with damages such as thins, tears, pinholes, and scuffs, can be purchased for around $50.