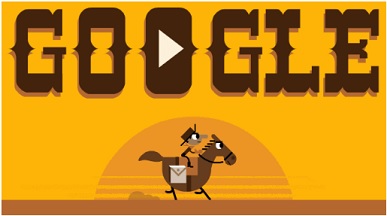 The Google Doodle for April 14, 2015, honors the 155th anniversary of the Pony Express with an animated image that becomes a mail-fetching video game.

The Google Doodle for April 14, 2015, commemorates the 155th anniversary of the Pony Express with an animation that turns into a video game.

Google Doodles are images, either static or animated, that celebrate events and anniversaries with alterations of the colorful Google search engine logo. The Doodle is usually posted for just one day, but often can be located in an archive.

The animated Doodle shows a Pony Express rider on his galloping horse. The letters spelling out "GOOGLE" across the top include a click button in the second "O" that starts the video game.

Using a computer keyboard, or touch controls on a mobile device, the user guides the galloping rider to pick up envelopes without colliding with objects in his path, such as rocks, fences and cacti.

On some operating systems or devices, the game is not triggered, and clicking on the Google Doodle brings in search results about the Pony Express.

After a brief description of the game, the video narrator drops in a plug for using letter mail, while an animated character admires a stamped envelope and puts it into a standing mailbox.

"And once you're done," the voice says, "why not utilize the modern-day Pony Express? You can write and mail a letter to someone you love — the old-fashioned way."