Quest for stamps leads collector to the city of Hong Kong 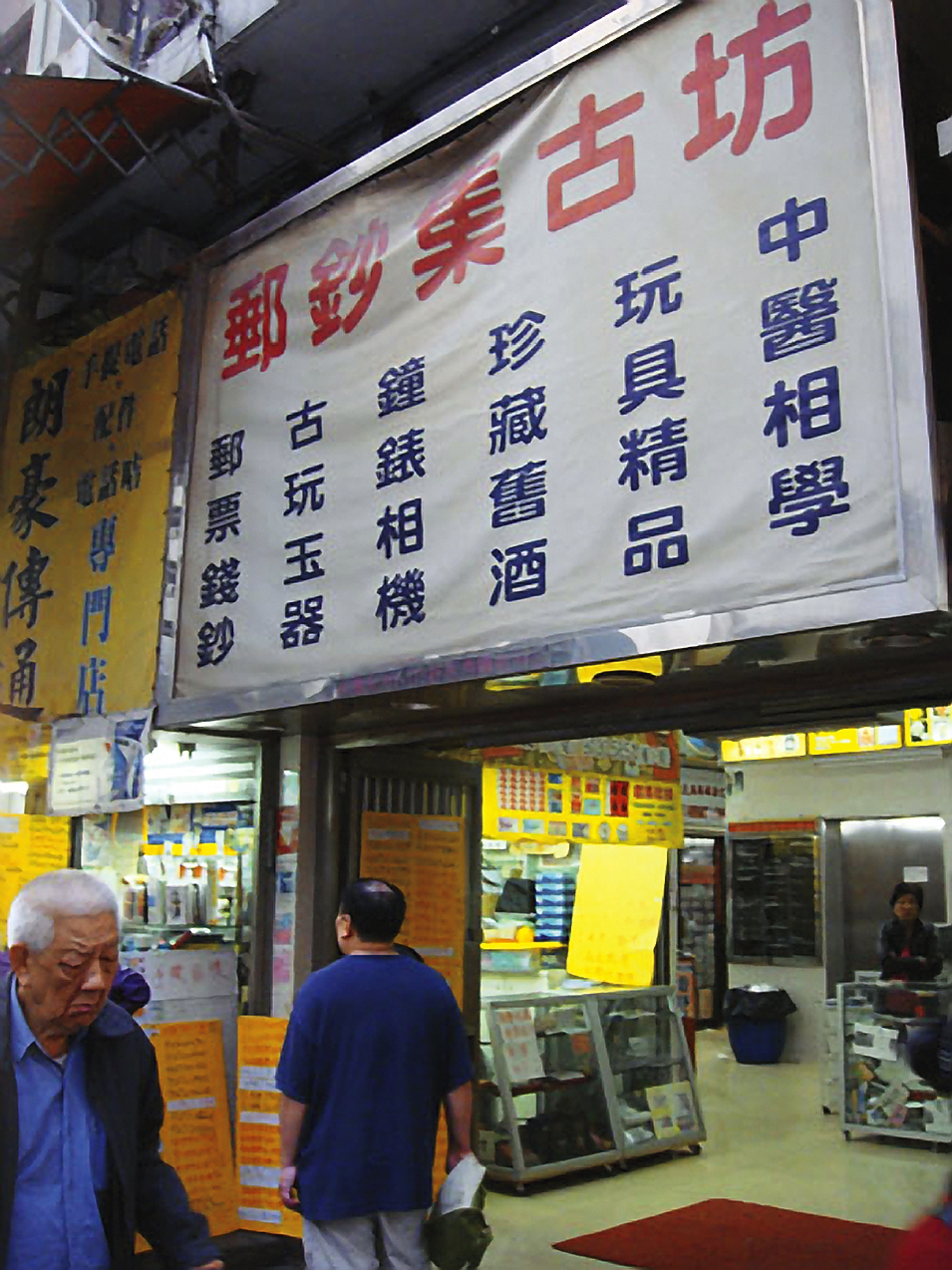 The entrance to Mongkok’s multi-floor stamp shopping mall, which is filled with small stamp and coin shops. 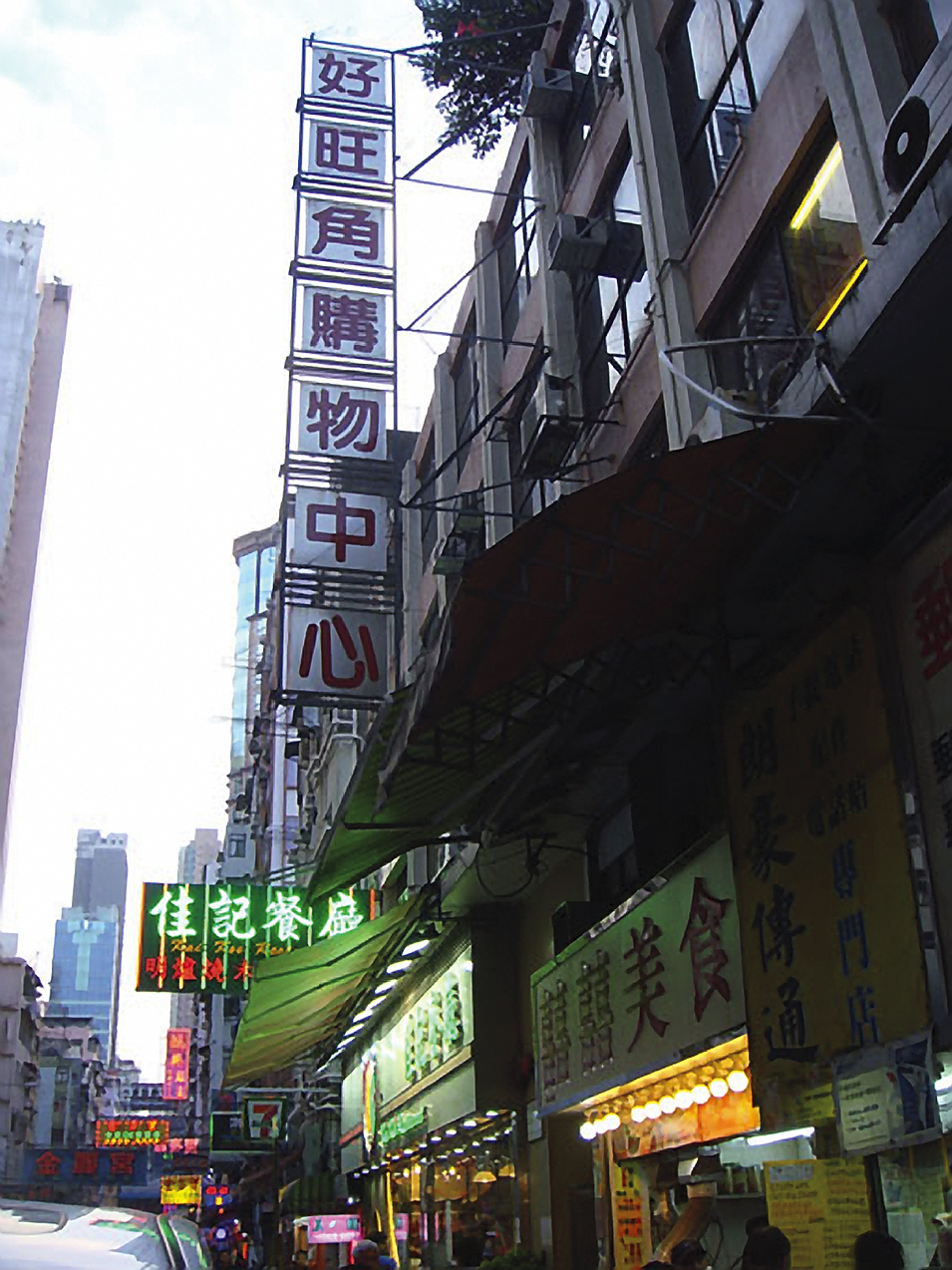 The stamp shopping mall in Mongkok offers a densely packed cluster of small stamp shops that are open year round. 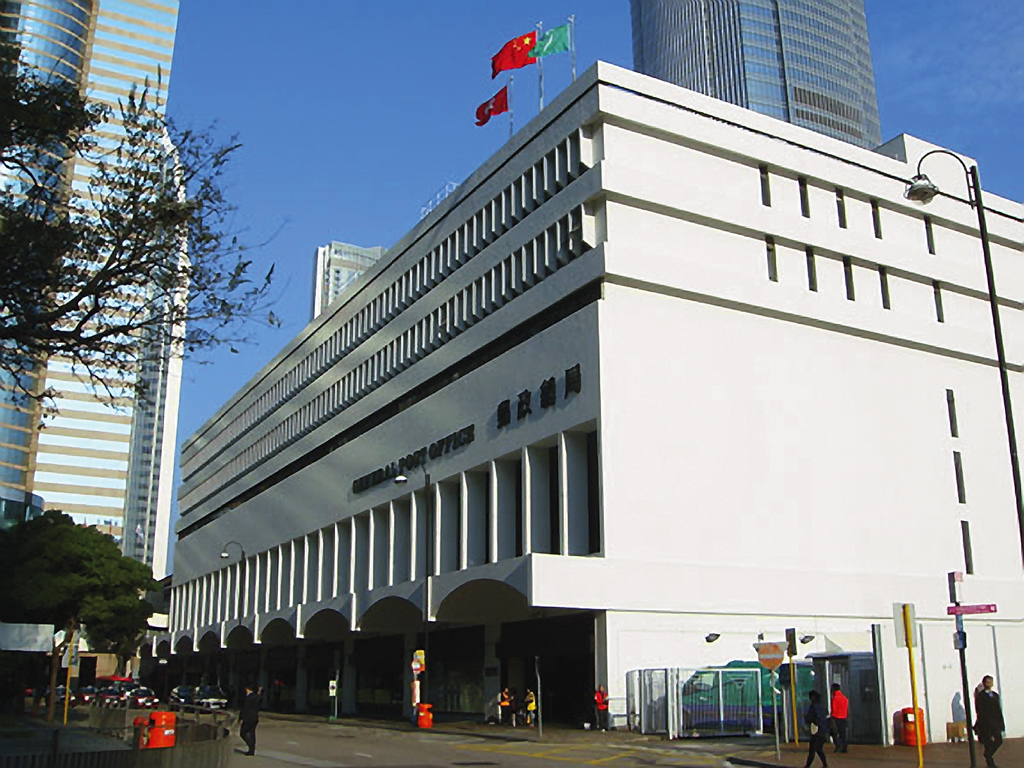 The General Post Office in Central Hong Kong. The philatelic department is located on the ground floor with a separate entrance. 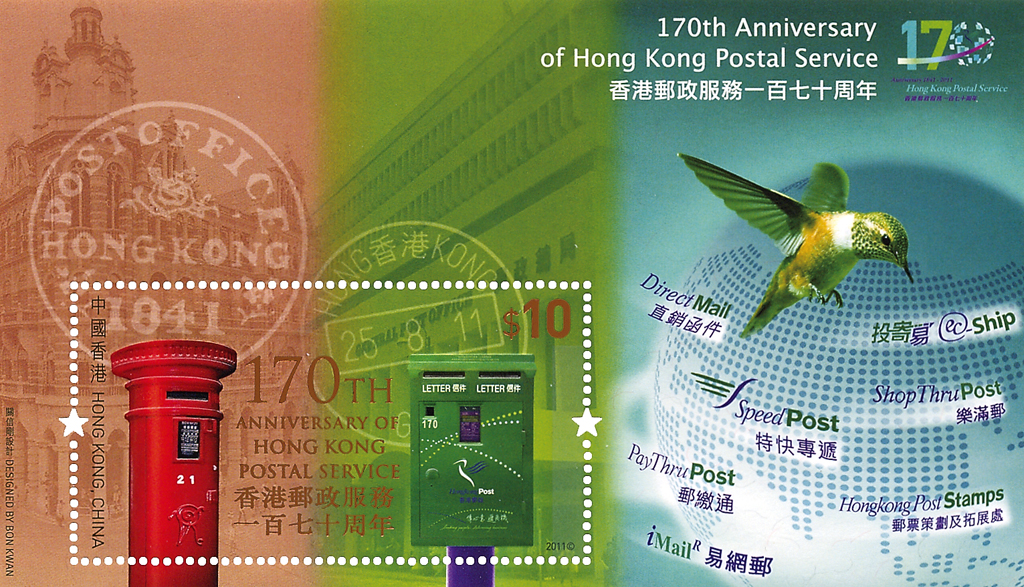 An embossed foil application also was used for this $5 souvenir sheet (Scott 1457) issued in 2011 to commemorate the 170th anniversary of the Hong Kong Postal Service. 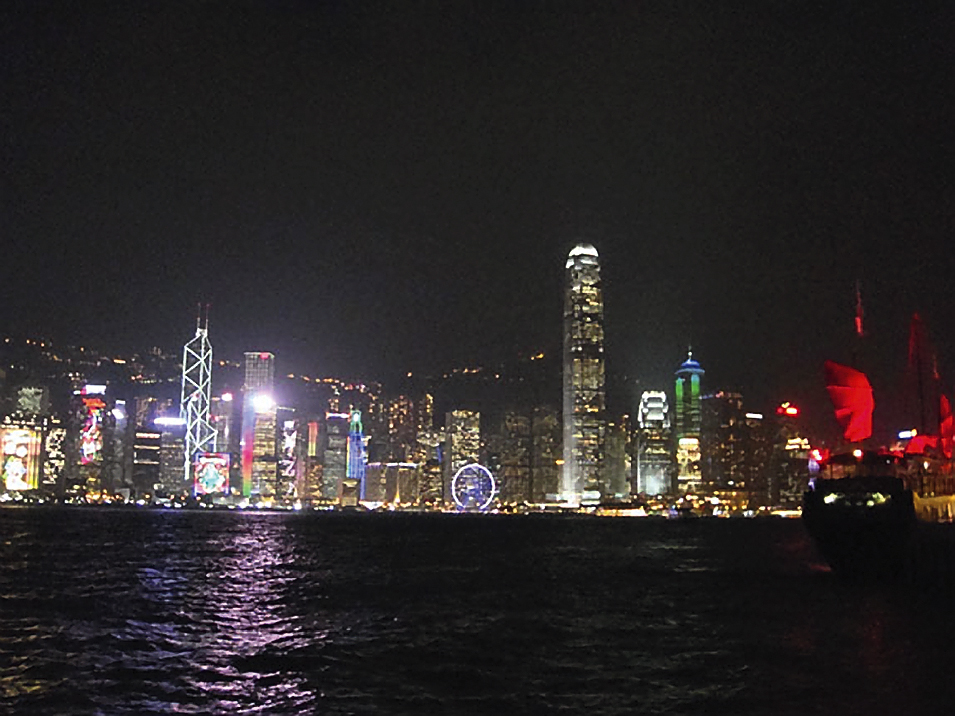 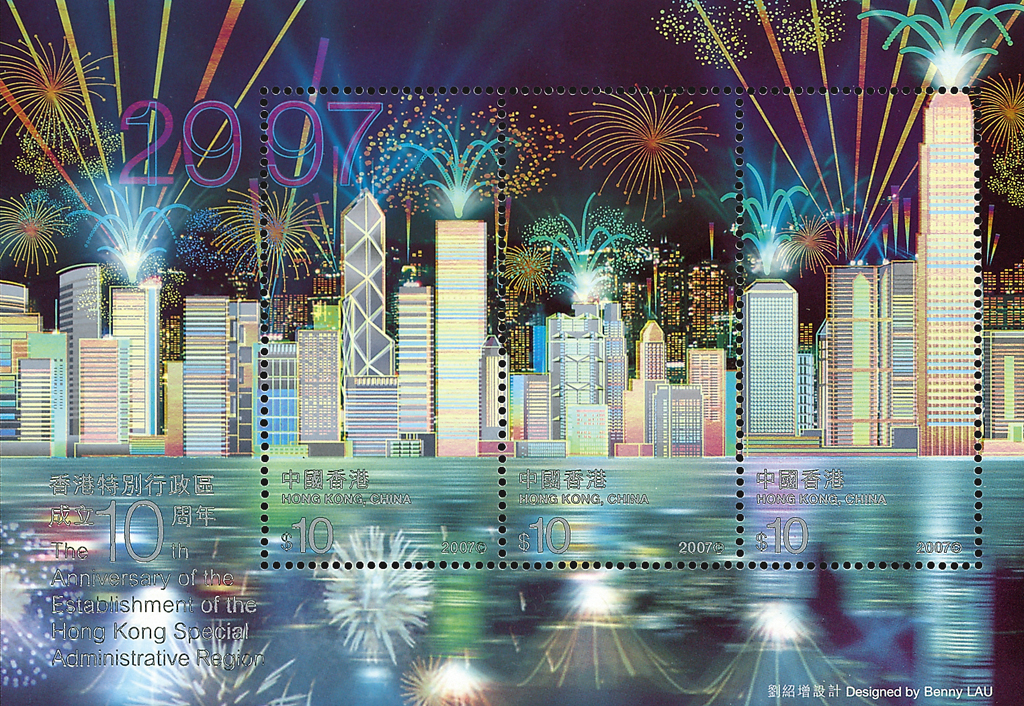 The 10th anniversary of the Hong Kong Special Administrative Region was celebrated in 2007 with a set of six stamps and this $10 souvenir sheet (Scott 1282) printed with a foil application and hologram.

When I travel, I like to look for stamps as both a souvenir of my visits and to fill in holes in my collections. I call this my “Stamp Quest,” and I enjoy sharing my experiences with other stamp collectors who also might enjoy acquiring stamps as they travel.

Hong Kong is a vibrant city with strong cultural ties to East and West. These are exemplified by its roughly 150 years as a British Crown Colony before becoming a Special Administrative Region of the People’s Republic of China in 1997.

A photo of Hong Kong’s splendid Victoria Harbor view from Tsim Sha Tsui is shown nearby.

This is a city that I visited frequently during the 1990s, but I had not been back since just before control was transferred from the United Kingdom to China.

I have been collecting Hong Kong stamps since the early 1990s and have managed to keep my collection current with new issues despite not visiting there in person since then.

During a recent short layover in Hong Kong, I visited a few stamp-collecting sites in pursuit of my hobby.

The experience was exciting  and brought back some memories.

The General Post Office is conveniently located at 2 Connaught Place, Central, Hong Kong, next to the ferry connecting the island with Kowloon.

Ferries also run to other nearby destinations such as the former Portuguese colony of Macao and Zhuhai, China.

Since the 1990s, the General Post Office has a philatelic section selling recent stamp issues from Hong Kong, as well as from other postal administrations, including Singapore, Malaysia, and Macao.

Recently, sales were expanded to include new issues of the People’s Republic of China, Australia, New Zealand, Switzerland, Great Britain, Canada, and even the United States. The philatelic section is open from 10 a.m. to 6 p.m., Monday through Saturday.

The philatelic department is located on the ground floor with a separate entrance from the main hall and an escalator to the second floor.

I was disappointed to find that philatelic shop has a better stock of souvenirs and stamps from other postal administrations than it does stamps from Hong Kong. Only partial sets of the most recent issues, a Local Foods joint issue with Malaysia, and Christmas stamps were available.

Both sets were missing the $3.70 stamps, which pay the international first-class letter rate. However, the souvenir pack for the Local Foods issue was available, but at a premium of double face value for the stamps and folder.

Souvenir items that might be of interest, such as mailboxes, postcards and decorative stamp displays, are available at the philatelic shop.

Mongkok District is one of the busiest shopping districts in the Kowloon peninsula of Hong Kong. Just parallel to the heavily traveled Nathan Road in Mongkok is the narrow but busy Portland Street. The Ho Mong Kok Shopping Centre at 163 Portland Street offers a multi-floor stamp mall.

The building is loaded with many small shops, mostly stamp and coin stores that are open year round. The shops close for local holidays but are open on weekends.

This is a holy grail for stamp collectors, where you can experience an adventure similar to a perpetual stamp show. The stores are highly specialized.

Contrary to my expectations, few of the stores specialized in stamps of Hong Kong.

The most common specialty among the shops is the stamps of China. As most collectors know, the market for Chinese stamps is the most active and volatile in the world. Evidently many stamp dealers make their living speculating in Chinese stamps.

After talking to a few stamp dealers there, I learned that many of them do the majority of their sales online. Most of them list stamps on eBay and on Taobao, a Chinese online marketplace.

My last stamp stop before leaving Hong Kong was the small but well-equipped post office in the departure hall at the airport. Inside the post office, there is a small display window of philatelic items for sale. As was the case in the General Post Office philatelic shop, there are not many new issues available at face value. But I did find a few stamps that were not available at the General Post Office, such as the World Heritage in China Series No. 3; China Danxia; and a prestige stamp booklet, A Journey Through Hong Kong’s Postal History — A Glimpse of Hong Kong’s Postal History Through the Old General Post Office Building.

Once you pass through immigration and security, the airport offers only a mailbox and a stamp vending machine.

On my return trip via Hong Kong, I had some time between connecting flights. I decided to enter Hong Kong and stop by the post office for the newly issued yearbook before catching my plane. I do not recommend doing this, but if you have a long layover (allow a minimum of two hours between arrival and departure), it is a  chance for a philatelic adventure. Be prepared for standing in line both ways, going in and out of security and immigration.

Hong Kong Post has a good and easy-to-navigate philatelic website that sells new issues. After this visit to Hong Kong, I found that many stamps unavailable at the General Post Office are still available from the website. This has been my primary source for Hong Kong new issues during the past years.

Opening a subscription is a great way to ensure that you don’t miss any new issues. The downside is you have to pay postage and handling. Surface mail is the most economical option, but it involves a long wait between placing your order and receiving the stamps.