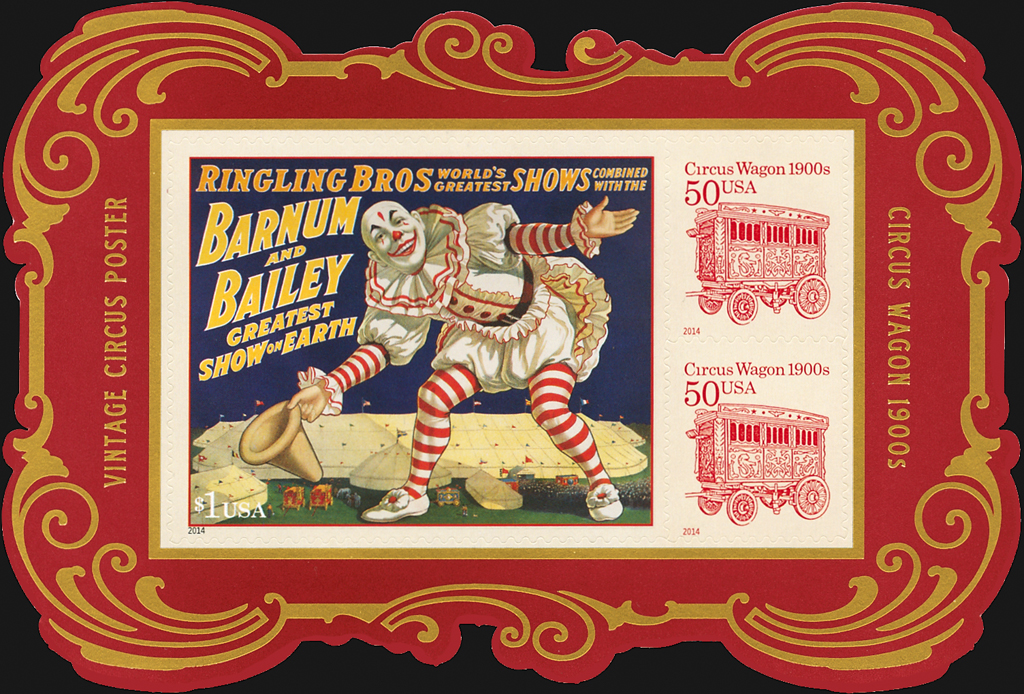 The Scott catalog has announced minor catalog numbers for imperforate varieties of the Circus souvenir sheet. The die-cut variety shown here is mentioned in a footnote.

The souvenir sheet with die cuts, pictured here, is not listed, but is mentioned in a listing footnote.

The listings in Linn’s will be published in the 2016 Scott Specialized Catalogue of United States Stamps and Covers, which is scheduled for release in October.

The controversial souvenir sheet was never sold individually in United States post offices, but was instead issued in a number of different varieties sold primarily through the U.S. Postal Service’s Stamp Fulfillment Services mail-order agency.

The U.S. Postal Service announced Aug. 21, 2014, that it would issue the souvenir sheet, but that it would only be available with the purchase of the annual USPS stamp yearbook.

Many collectors expressed dismay that the souvenir sheet could be obtained only by purchasing the hardcover book, which comes with 90 stamps and sells for $64.95.

The Nov. 17, 2014, Linn’s reported that in addition to the original yearbook distribution plan, press sheets of the Circus souvenir sheets would be issued Dec. 10.

The same imperforate souvenir sheet would be sold postmarked on a first-day cover as well.

The Postal Service issued 10,000 press sheets, each containing 12 souvenir sheets. The press sheets sold out through preorders before the stamps were officially issued.

The sheets were printed and processed by Banknote Corp. of America for Sennett Security Products.

The souvenir sheet without die cuts is listed as Scott 4905b.

In a footnote, the catalog editors point out that the $4 Scott catalog value for the unused souvenir sheet is for a souvenir sheet having “the white press sheet margin surrounding the die cutting.”

This error is now listed as Scott 4905e.

The Scott catalog footnote addressing the die-cut variety sold only with the yearbook reads:

“Examples of No. 4905b with serpentine die cutting around the three stamps were sold only with the USPS 2014 Stamp Yearbook, which sold for $64.95. The souvenir sheets sold with the yearbook are punched out from the press sheets and lack the white press sheet margin.”