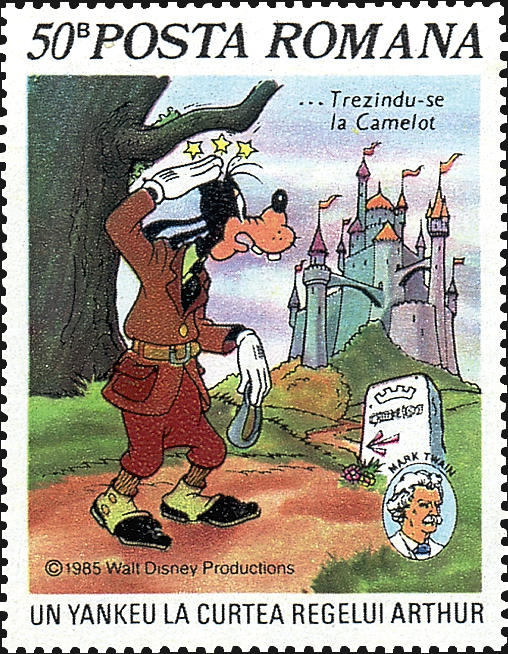 Mark Twain’s A Connecticut Yankee in King Arthur’s Court has a connection to the word “hello.” 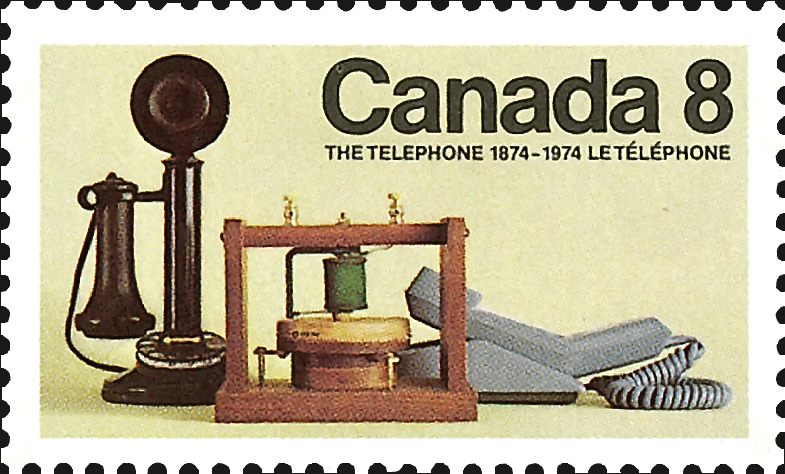 The invention of the telephone led to the widespread use of hello. 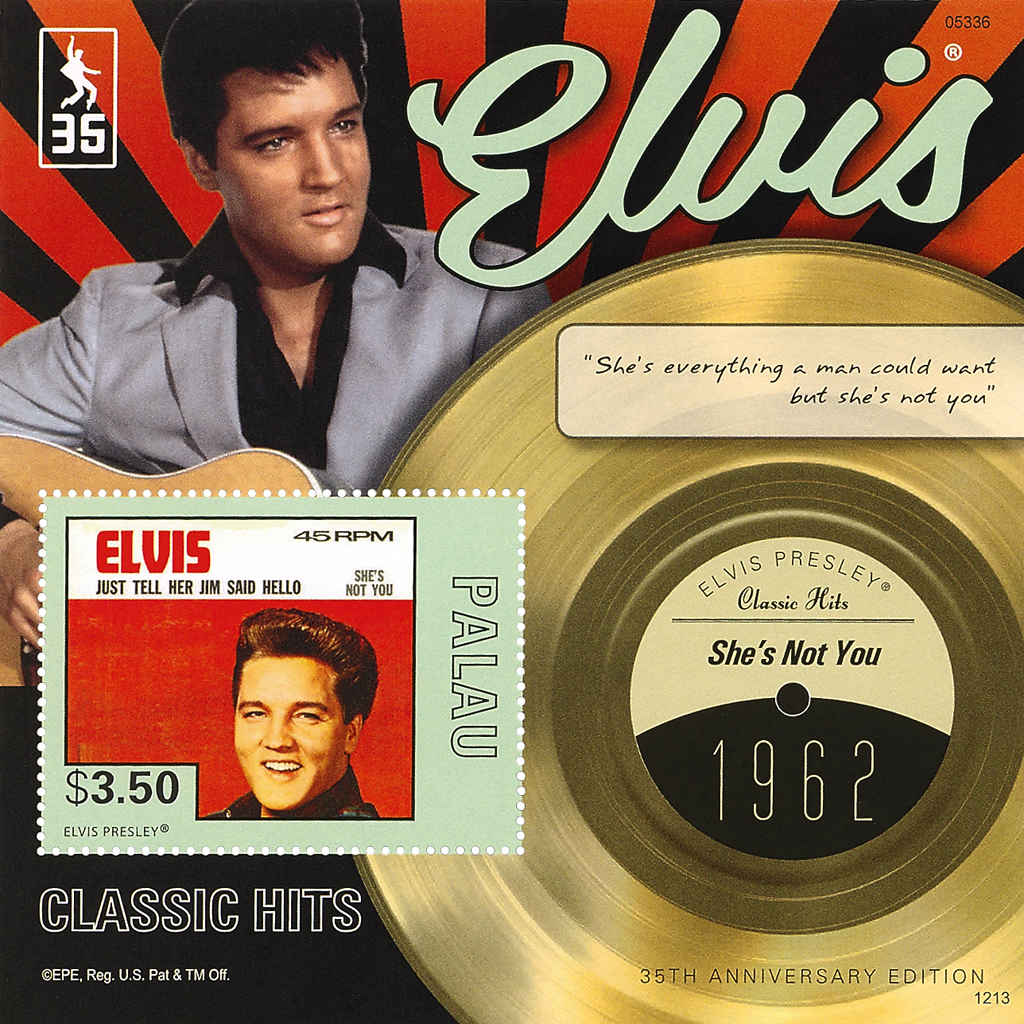 Elvis’ Just Tell Her Jim Said Hello is the B-side of She’s Not You, shown on this stamp from Palau. 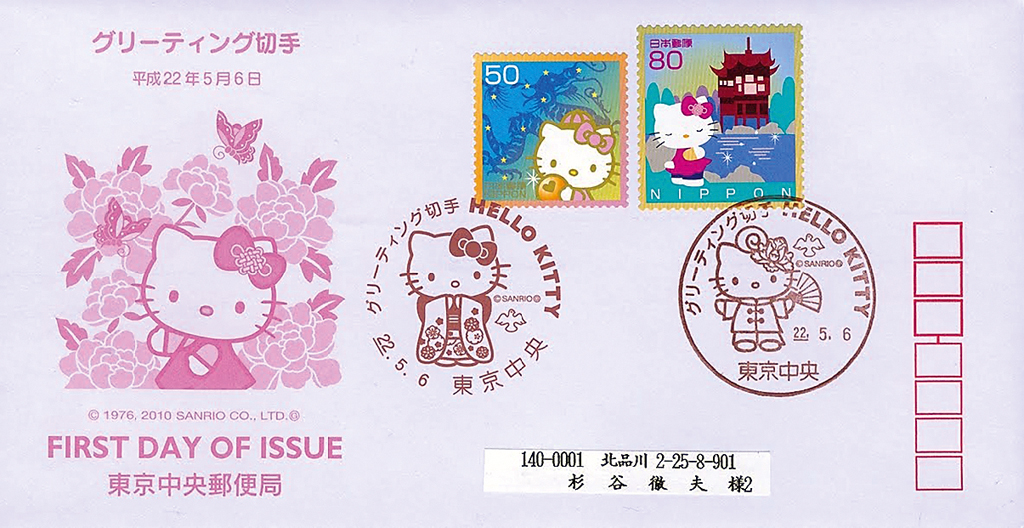 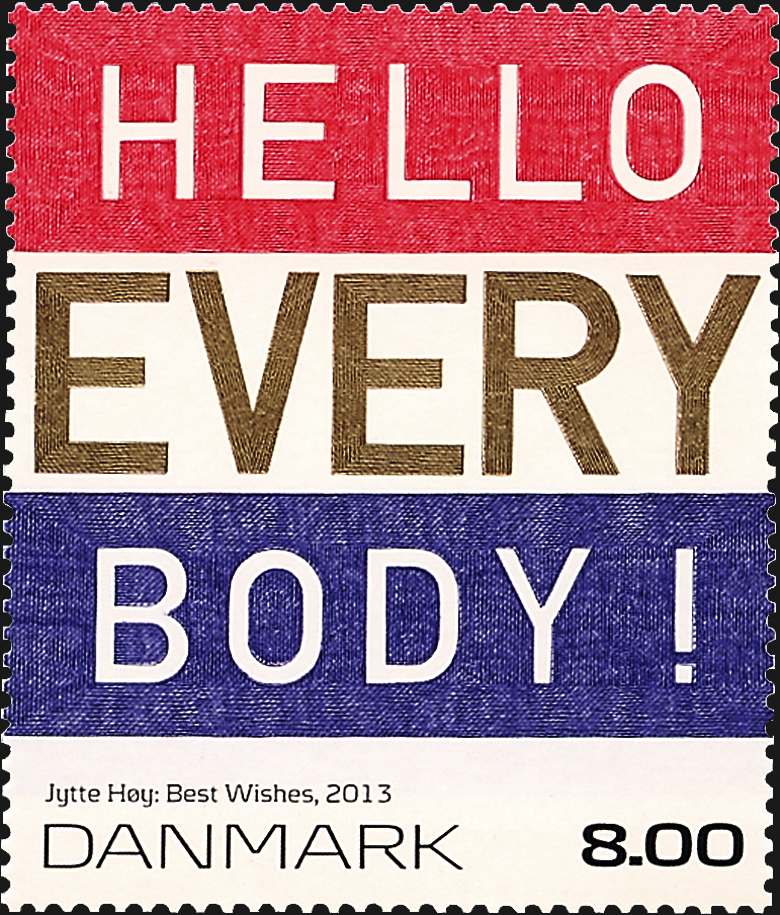 A Danish artist greets everyone with this large “Hello.” 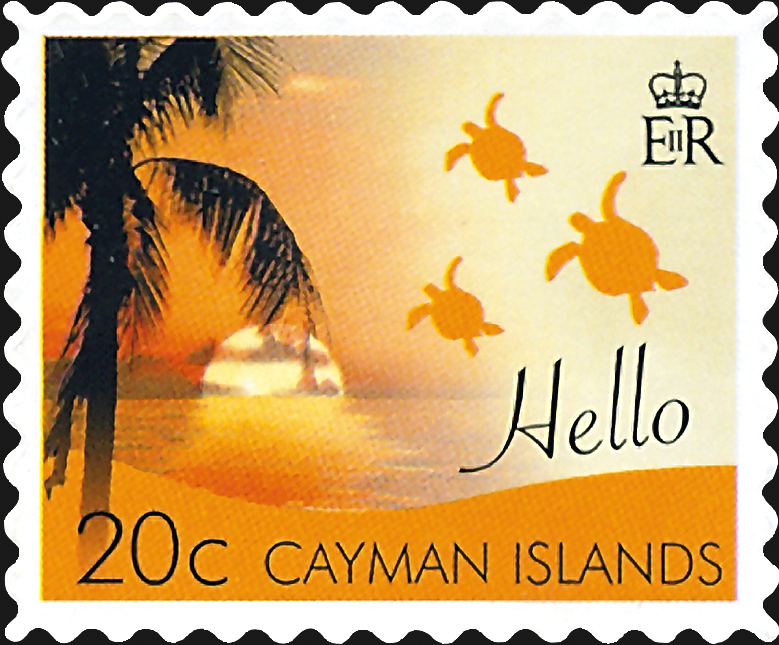 “Hello” from the Cayman Islands. 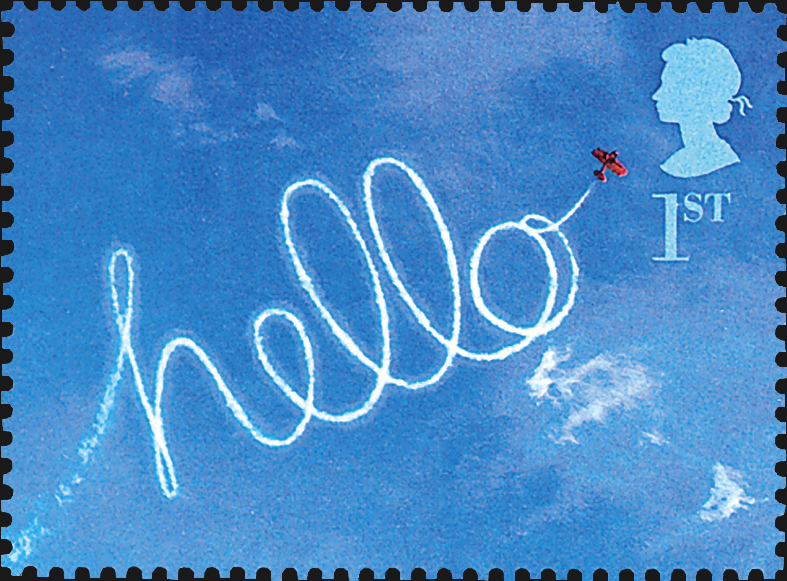 “Hello” in skywriting from Great Britain.

Hello is often the beginning of a conversation, and it also can be the start of a small topical collection.

I have found more than a dozen stamps that include “Hello” in their designs, and I bet that there are more.

The first, issued in 2002, was a horizontally formatted nondenominated first-class stamp with “hello” in white on a blue sky (Scott 2025). In 2005, the design was transformed into a vertically formatted stamp (2314) for the Smilers series of stamps printed with se-tenant labels that can be personalized.

On the third design, “hello” is in red in a pale blue sky with puffy white clouds. This nondenominated stamp, issued in 2010 for use on worldwide mail (Scott 2744j), also shows silhouettes of the skywriting plane and city buildings and includes red and blue chevrons.

Each of these three designs has been printed in different versions. And, the vertically formatted skywriting “Hello” stamp will appear again in a special pane of stamps and labels honoring the May 13-16 London 2015 Europhilex stamp show. This pane is titled “Hello from Royal Mail.”

Other stamps provide more of a challenge to find the “Hello.” For example, a 2008 stamp from Guernsey depicts the word “Banjour” in large letters with “Hello” much smaller beneath it (Scott 992). Banjour means hello in Guernesiais, a variety of Norman French.

In addition, it can be found in titles on a Disney stamp from Grenada-Grenadines, Hello, Aloha (Scott 1445), and an Elvis Presley souvenir sheet from Palau, Just Tell Her Jim Said Hello (Scott 1101).

The topic of hello can be expanded to include related items, such as postmarks. The words “Hello Kitty” are prominent on first-day cancels for Japan’s Hello Kitty stamps issued May 6, 2010. Pictured nearby are two stamps (Scott 3231c, 3232b) graphically cropped from their first-day cover. The cover is shown courtesy of Eric Bruth.

Stamps that feature foreign words that mean “hello” also could be part of a topical collection, as could stamps that relate to the history of the word’s usage. It may have originated with a shout to get the attention of a ferry man or a command for hunting dogs, but hello definitely gained popularity with the invention of the telephone. Canada Scott 641 is one of numerous stamps commemorating the telephone.

Mark Twain was one of the first authors to use the word in connection with the telephone in print, in his 1889 novel A Connecticut Yankee in King Arthur’s Court, which is represented on a 1985 Disney stamp from Romania (Scott 3331).

One great attraction of topical collecting is that you can decide what to collect, whether it be a small accumulation of only the stamps with the actual word, an expanded collection of additional related items or an even larger one telling the story behind the word’s origins.