The Navy and the American Civil War: A remembrance found on stamps 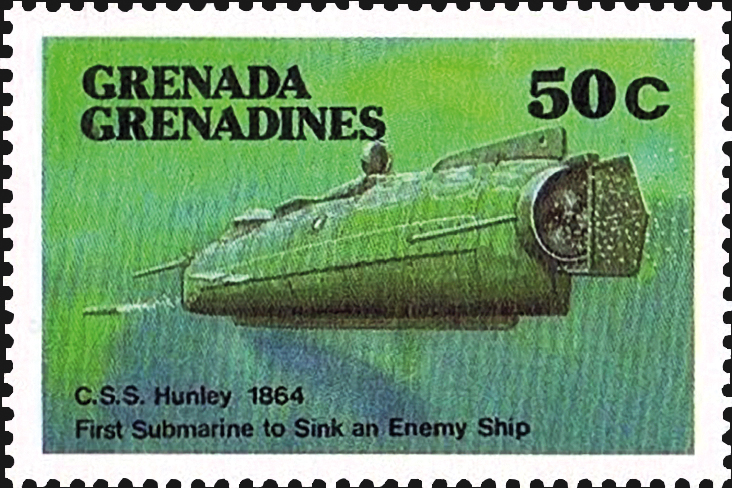 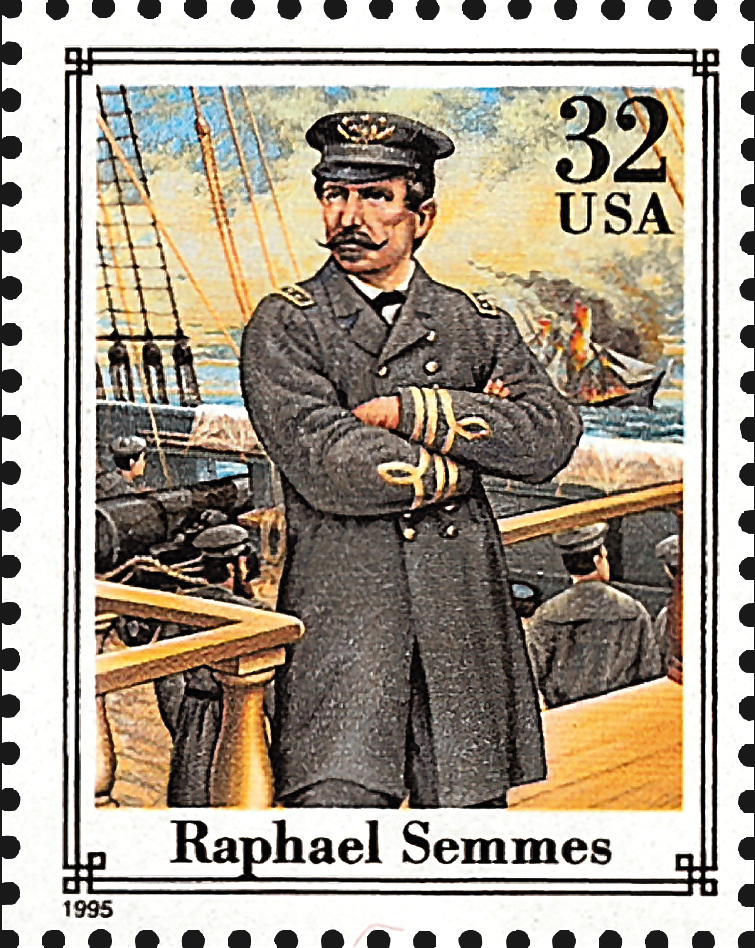 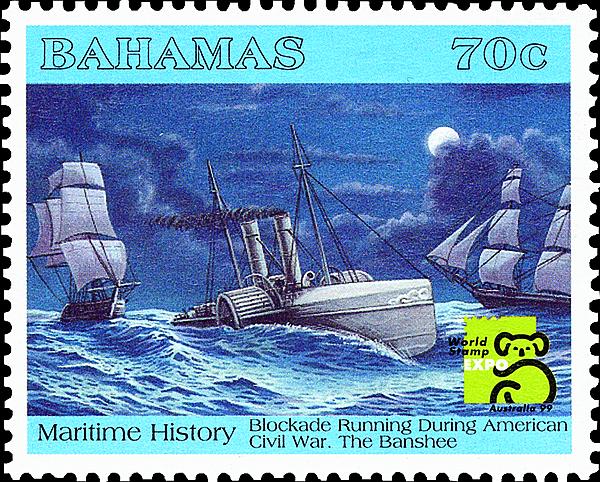 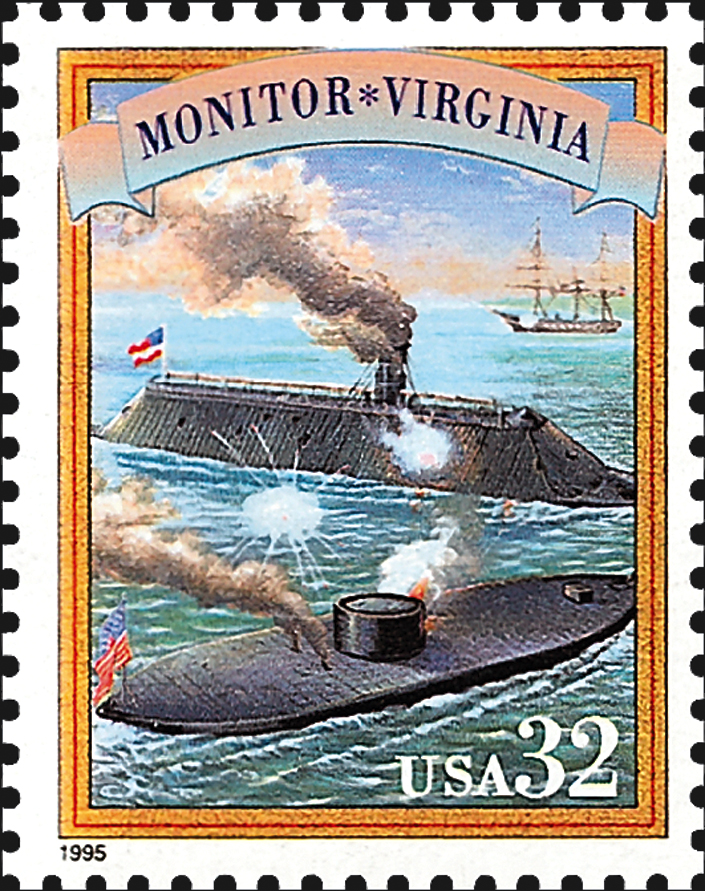 The USS Monitor and CSS Virginia battle each other off the coast of Hampton Roads, Va., on this 32¢ stamp (Scott 2975a) in the United States 1995 Civil War pane of 20. 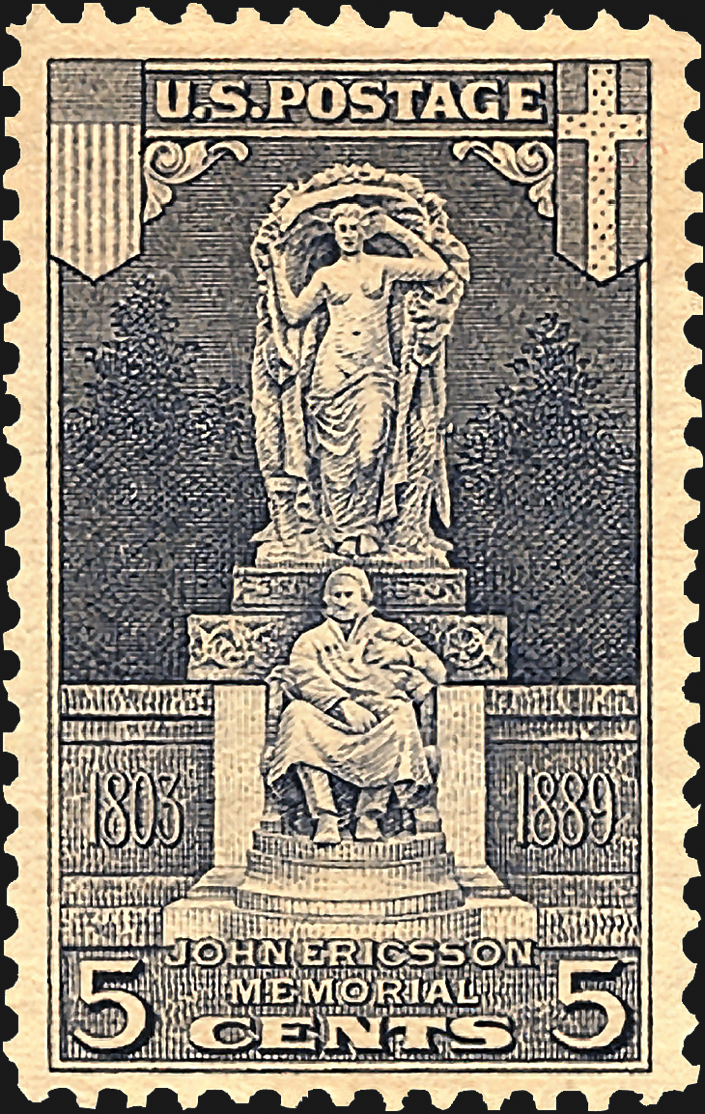 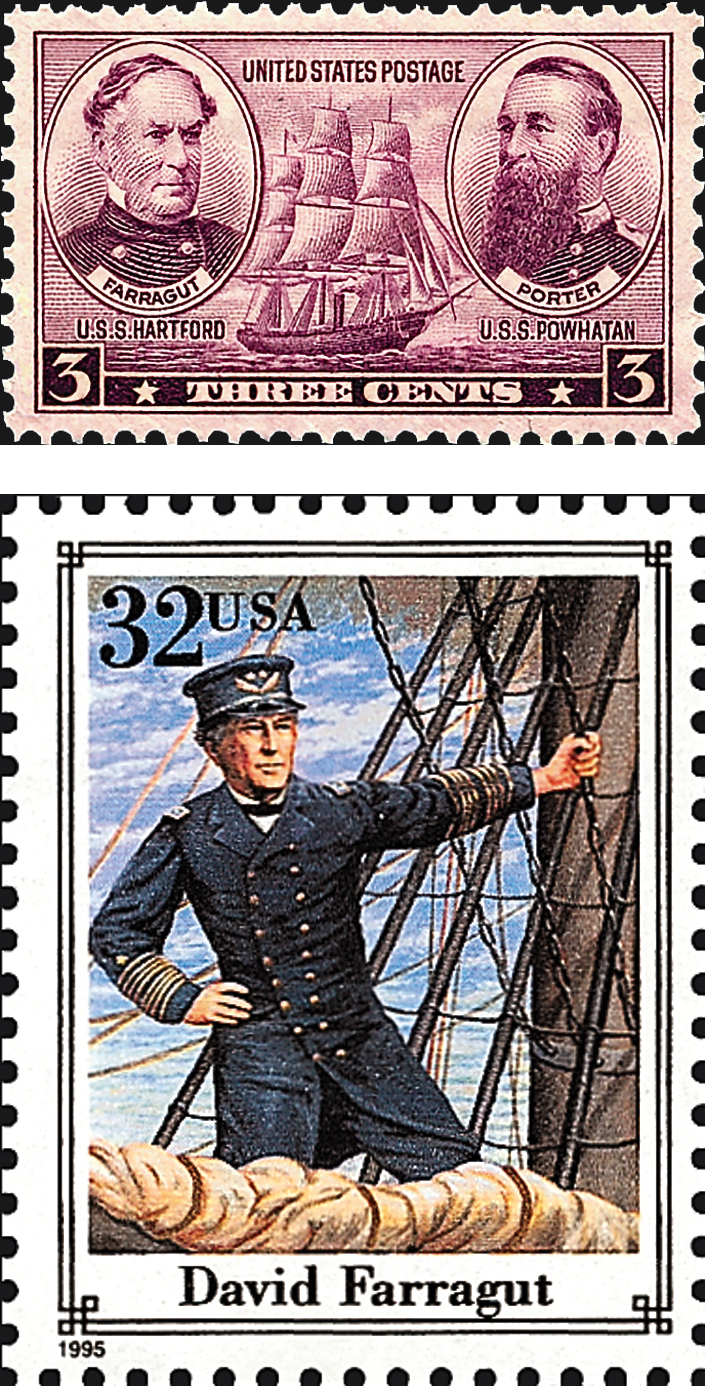 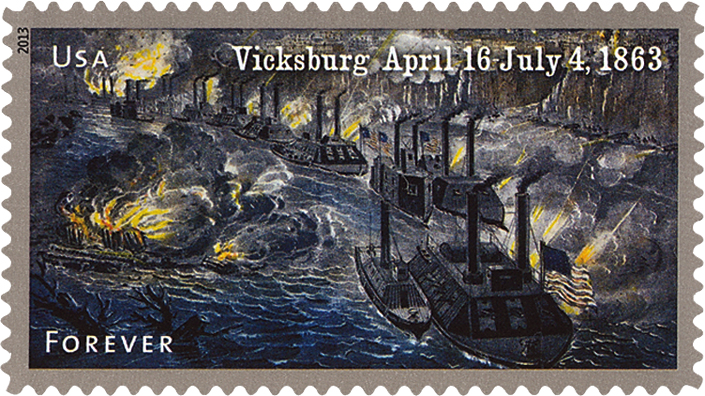 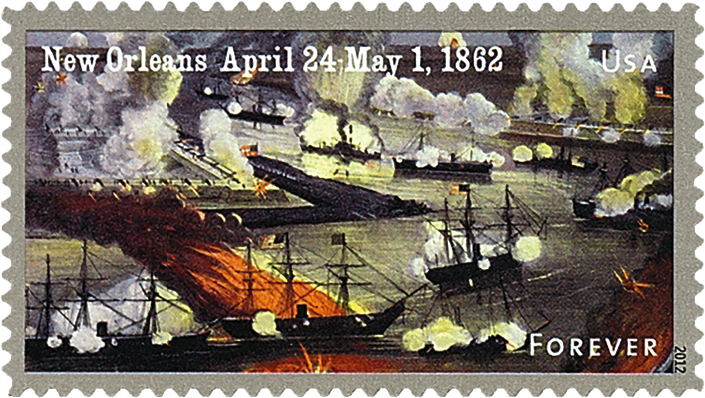 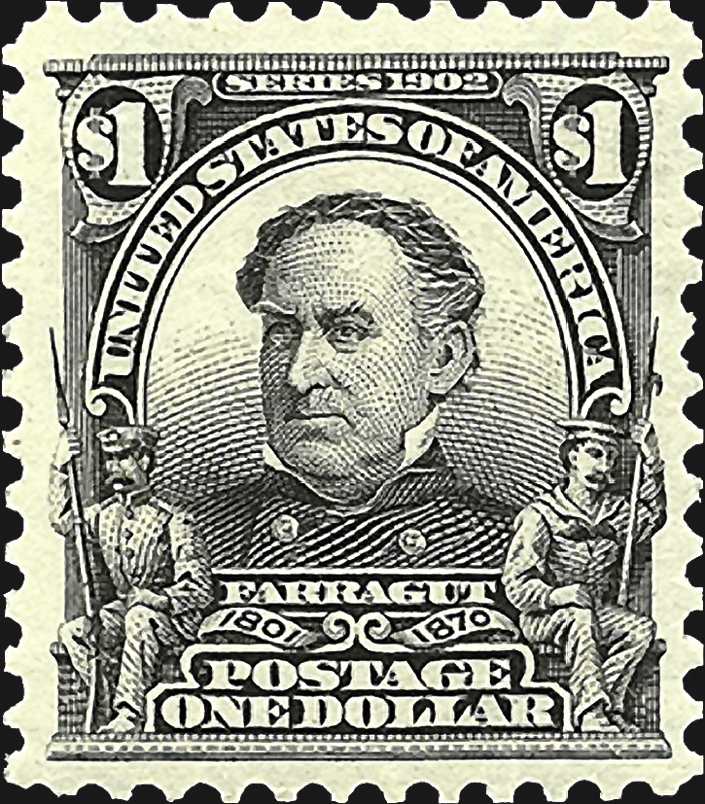 The guns of the American Civil War (known below the Mason-Dixon Line as the War Between the States) fell silent 150 years ago this month. Although the last veteran of that bloodiest of American wars died in 1956, the war still affects us in more ways today than we can probably imagine.

The freeing of the slaves, the economic devastation of the South, the strengthening of the powers of the federal government, and the nearly three-quarters-of-a-million deaths and the shattered lives of the more than 400,000 wounded are but the most obvious.

Collecting the Civil War as a topical subject on stamps is popular with many collectors, and the number of topical stamps issued worldwide has grown greatly in recent years.

Although it has been somewhat over­shadowed by the stupendous battles and bloodshed at places such as Antietam, Shiloh, Vicksburg, Gettysburg and the Wilderness, the Civil War fought at sea and on the rivers by the United States Navy and Confederate States Navy is worthy of attention.

The first U.S. stamp to commemorate naval aspects of the war was the 1903 $1 Adm. David Glasgow Farragut stamp (Scott 311).

The son of a Spanish father and Scots-Irish mother, Farragut was the first man to achieve the rank of admiral in the U.S. Navy. His naval forces were highly effective in the unglamorous duty of enforcing the blockade on the South. He also scored signal victories in the capture of New Orleans in 1862 and the Battle of Mobile Bay in 1864, and commanded the naval forces engaged in the Siege of Vicksburg.

The Battle of New Orleans was commem­orated on a nondenominated (45¢) forever stamp (Scott 4664) issued in 2012. Naval forces under Farragut forced the surrender of the city on May 1, 1862, cutting the Confederacy off from its major source of resupply via the Gulf of Mexico.

Farragut’s gunboats are seen in action on the 2013 U.S. nondenominated (46¢) Siege of Vicksburg forever stamp (Scott 4787). After a siege of more than 40 days by troops led by Gen. Ulysses S. Grant ashore and Farragut’s naval forces on the Mississippi River, Vicksburg surrendered, giving the Union control of the entire Mississippi River and isolating the Trans-Mississippi Confederate states.

It is appropriate that Farragut has been commemorated on more U.S. stamps than any other American naval officer. In 1937, he was commemorated along with his adopted brother Adm. David Dixon Porter on a 3¢ stamp (Scott 792) in the Navy issue. His most recent appearance was on a 32¢ stamp (Scott 2975g) in the 1995 Civil War pane of 20. This stamp shows Farragut in the rigging of his flagship at the Battle of Mobile Bay, Aug. 5, 1864.

Adm. Porter, also commemorated on the 3¢ Navy issue stamp, was the son of Farragut’s adoptive father. Porter was the second man ever to be promoted to the rank of admiral in the U.S. Navy. Porter served under Farragut at the Battle of New Orleans and the Siege of Vicksburg. He also commanded Union naval forces at the capture of Fort Fisher in January 1865, which proved to be the last significant naval action of the war.

War often spurs advances in technology. The first stamp commemorating a technological innovation of the Civil War is likely the 1926 5¢ Statue of John Ericsson stamp (U.S. Scott 628). Ericsson designed the ironclad USS Monitor, which fought the CSS Virginia to a draw on March 9, 1862, off the coast of Hampton Roads, Va.

After the Battle of Hampton Roads, the USS Monitor participated in the Battle of Drury’s Bluff in the Peninsular Campaign before being ordered to blockade duty off the North Carolina coast. She foundered and sank in a storm on Dec. 31, 1862, off the coast of Cape Hatteras, N.C. Of her 63-man crew, 47 were rescued and 16 perished at sea. The wreck of the USS Monitor was discovered in 1973 and has been partially salvaged.

The CSS Virginia met a less noble fate. Her base at Norfolk, Va., fell to the Union on May 10, 1862. Not being designed for travel on the open ocean, the Confederate ironclad was unable to escape. To keep her from falling in to Union hands, the Confederates stripped her of her canon and blew up her magazines on May 11, 1862.

Although neither prototype of the ironclad survived 1862, the die was cast. By the end of the war, the Union had commissioned more than 50 ironclad gunboats, while the Confederates built and operated a much smaller number. The days of the wooden-hulled warship were numbered

The Confederate States Navy, created by act of the Confederate Congress on Feb. 21, 1861, was much smaller than its Union counterpart, but still contributed significantly to the war effort.

One of its greatest successes was the commerce raider CSS Alabama, commanded by Rear Adm. Raphael Semmes. Semmes is commemorated on a 32¢ stamp (Scott 2975i) in the Civil War pane of 20.

The Confederacy, under Union blockade, sought to share the pain by sending the CSS Alabama to prey on Union shipping on the high seas. The Confederate commerce raider took 65 merchant ships and sank the Union warship USS Hatteras before being engaged and sunk by the USS Kearsarge off the coast of Cherbourg, France, on June 19, 1864.

After the loss of his ship, Semmes and 41 members of his crew were picked up by a British ship and taken to England. Semmes was able to return to the Confederacy. With no naval assets to command, he was given the rank of brigadier general and served with the Confederate army in the waning days of the war.

A truly groundbreaking innovation produced by the Confederacy was the CSS H.L. Hunley, the world’s first operational submarine to sink an enemy ship in battle. The Confederate submarine is seen on a 50¢ stamp from Grenada-Grenadines (Scott 880), issued in 1987 as part of a set honoring transportation innovations.

On the night of Feb. 17, 1864, the CSS H.L. Hunley, using a spar torpedo, attacked and sank the USS Housatonic. Tragically, the submarine also sank after the attack with the loss of the entire seven-man crew. Two other crews had earlier been lost in training accidents.