U.S. Stamp Notes: A new consular mail find on cover from Dresden to the U.S. 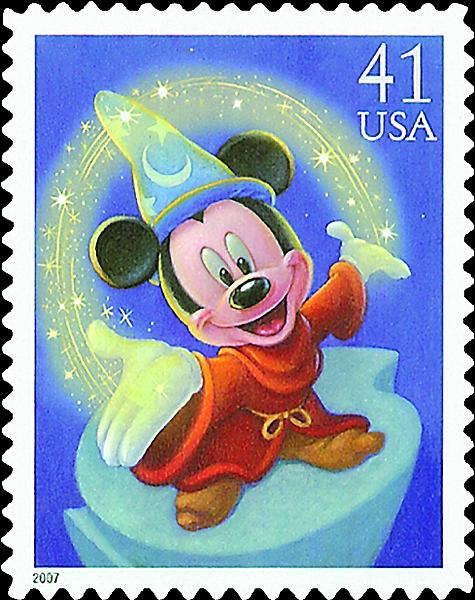 Steve Kotler of San Francisco wins one of two prizes in the March cartoon caption contest, with this philatelic line that asks who you have to be to get the Postal Service to issue 20 stamps in your honor. The next contest will be announced in Linn 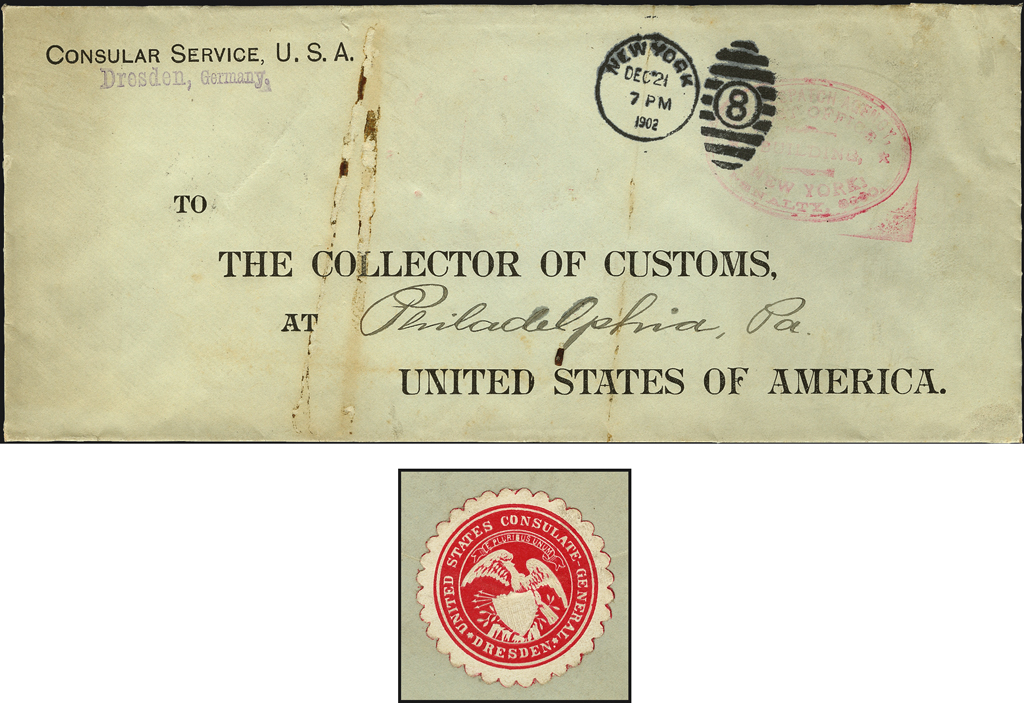 How could a cover that originated in Dresden, Germany, in 1902, addressed to Philadelphia, be canceled in New York? The answer lies in the fuzzy red marking that is just below and to the right of the New York cancellation. The seal of the American Cons

Because of my United States State Department career, I keep an eye out for covers that have traveled between an overseas post and U.S. addresses.

Over the course of nearly 50 years of looking, I thought every possible variation in transmission method and marking had crossed my desk, but it seems the occasional delightful discovery can still take place.

Shown nearby is a Consular Service envelope that began its journey at the American Consulate General in Dresden, Germany, in 1902. It is official business, addressed to the Collector of Customs at Philadelphia. There is no cancellation denoting the point of origin, but there is the attractive red and white paste-on seal that seals the flap on the back.

My assumption is that the letter was carried by hand or in the diplomatic pouch to New York City, which would have been the most likely port of entry in 1902.

At that point, the letter entered the U.S. mail on Dec. 21, 1902, per the cancel on the front. According to the backstamps, it was received in Philadelphia the next day, Dec. 22.

What makes this cover special is the handstamp in red just to the right of and underneath the New York cancellation.

I can’t tell what the amount of the penalty is, but it is clear that this was the State Department’s method of indicating to the New York post office that a postage stamp was not needed.

Surely there are other examples of this marking, and I would be interested in seeing them if Linn’s readers can report any. If so, please contact me, John Hotchner, Box 1125, Falls Church, VA 22041; or by e-mail.

The American Consulate General at Dresden was established in 1837, and was shuttered in 1940.

After World War II, the city fell within the part of eastern Germany that morphed into the German Democratic Republic.

After Germany’s reunification, an American post was established in Leipzig, but Dresden was not reopened.

Did anyone notice Mickey Mouse’s gloves on the 41¢ The Art of Disney: Magic stamp used as the cartoon caption contest subject for March? It’s the first thing one of my grandchildren spotted, and they wanted to know why Mickey wears gloves. The answer is provided at the end of this column.

The most popular theme in the captions from Linn’s readers was the magic needed to fix the United States Postal Service’s finances.

One example comes from Michael Gnecco of Danville, Calif., who has Mickey saying, “Even my Magic Wand can’t make the Post Office profitable!”

Wishful thinking motivated several others as well, but in another intractable area — unsoakable self-stick stamps — and I am certainly sympathetic.

Paul McFadden of Dover, Ohio, sent this rhyme: “When I wish upon a star, I wish for gum without the tar.”

Several entries noted the similarity between Mickey’s perch and a toilet seat cover.

David Schwartz from Commack, N.Y., submitted: “How do you flush this thing?”

Our philatelic line winner comes from Steve Kotler of San Francisco, who asks a perfectly reasonable question, as shown nearby.

Of course, the Disney characters series, issued in blocks of four over five years, from 2004 through 2008, also totaled 20 stamps, and Mickey was featured on one stamp each year. Yet the 2013 Harry Potter issue with 20 different stamps all at once raised considerable dust at the time, and questions remain as to the decision-making process that resulted in the 2013 issue.

On the nonphilatelic side of the contest, the winner is “Hi, I’m Mickey Mouse, and I’d appreciate your vote for Congress. I’d fit right in and maybe my magic would work,” by Bradley Miller from Huntsville, Ala.

Both winners will receive Linn’s Stamp Identifier published by Linn’s, or a 13-week subscription to Linn’s (a new subscription or an extension). The book has a retail value of $12.99. Here are a few of the runners-up:

“As the new PMG, I promise to initiate a new ‘Magic Wand Rate’ that will move the mail even faster,” from Walter Robidoux, sent by e-mail.

“Watch me make this ‘41¢’ disappear FOREVER!” by Joe Timko from Vicksburg, Mich.

“Sorry, I thought you wanted a real Zeppelin,” sent by Steve Zarko from Lewisburg, W.Va.

“I get my mail delivered by drones!” from Willi Kuehle of Eastsound, Wash.

“Just stick one of me on an envelope. It disappears into the blue box, and shows up hundreds of miles away within a few days!” by Mike Lantz of Niles, Ohio.

Thanks and a tip of the hat to all who entered. The next cartoon caption contest will be announced in the May 11 issue of Linn’s.

Now, as to Mickey’s gloves: When Mickey was first created in 1928, gloves were not part of his wardrobe.

But within a year, Walt Disney added the white gloves we have come to expect because they made Mickey look more human, and made his hands stand out from his dark body.