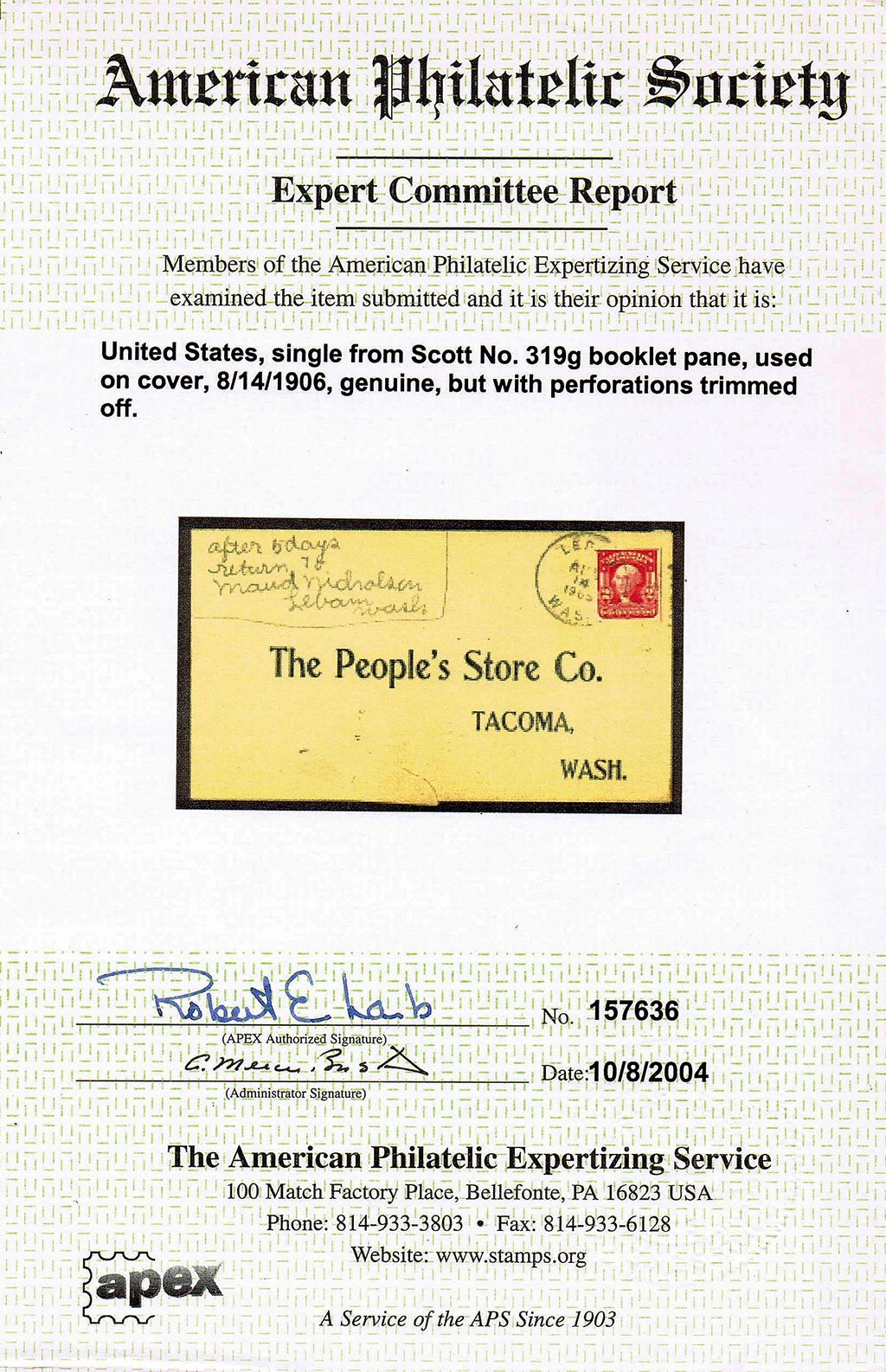 This cover, submitted as having a possible imperforate single, is identified by the 2004 American Philatelic Society certificate as bearing a single from Scott 319g, a booklet pane, with perforations trimmed off. 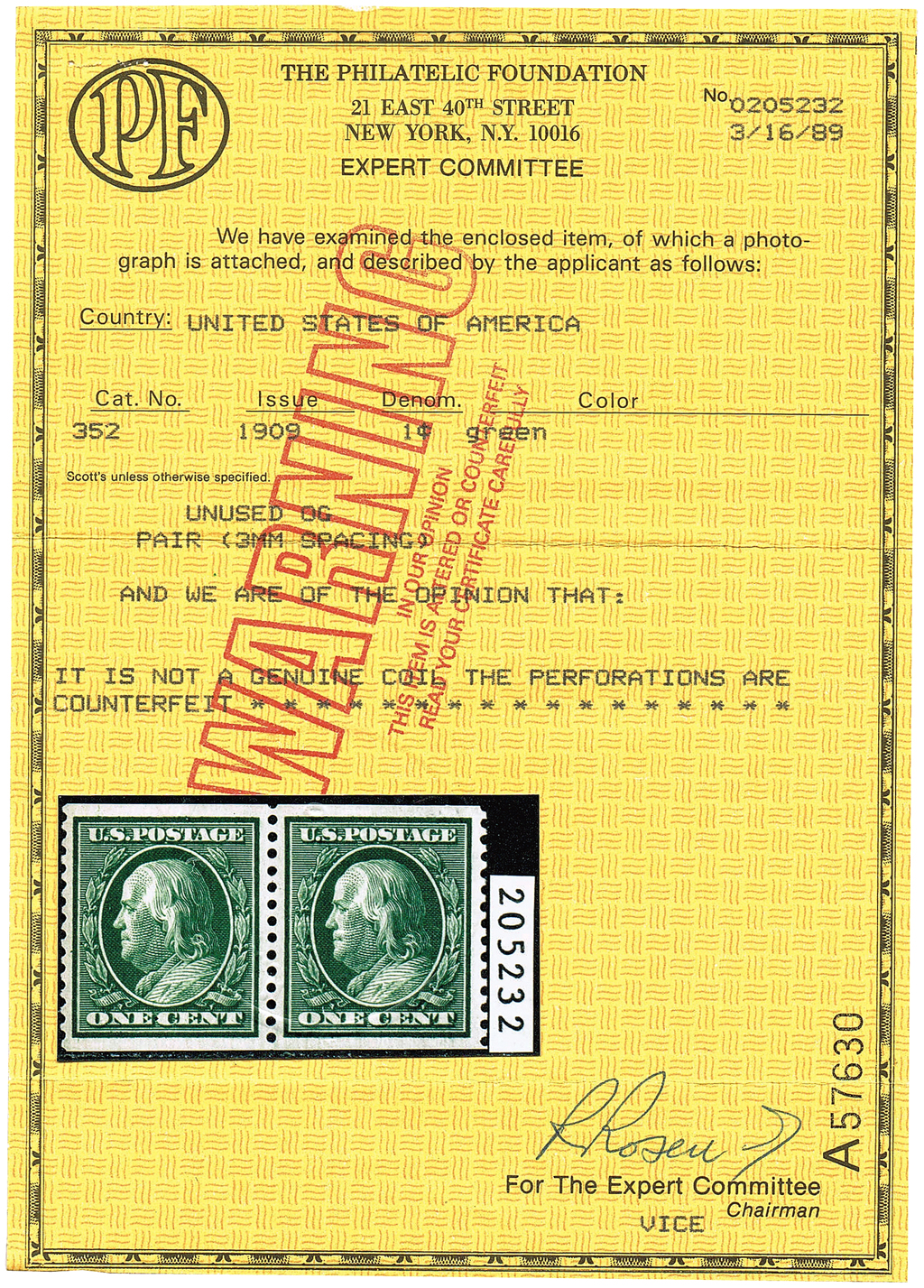 This 1989 Philatelic Foundation certificate states that the illustrated pair of 1¢ Washington stamps submitted as Scott 352, horizontal coils, is actually a pair of imperforate Scott 343 with vertical perforations added.

Some reports from collectors about dealer practices at the point of sale illustrate the need for standardization of what to expect regarding the expertization of stamps and covers.

Several readers have written to me about inconsistent practices regarding expertizing that they have encountered while purchasing stamps from dealers.

There is no governing set of rules or standard practices to which dealers are expected to adhere, and the result is that buyers and dealers sometimes engage in an elaborate dance to establish ground rules at the point of sale, leaving both unhappy.

And that is when the collector-buyers are knowledgeable enough to ask the right questions. Many of us aren’t.

I think that establishing a code of ethics for this situation, under the umbrella of the American Stamp Dealers Association, would help smooth the relationship between dealers and collectors at the point of sale. If everyone knew what to expect, I am certain that there would be more buyers feeling comfortable enough to buy more stamps, making it worthwhile for dealers to buy into such a code.

First, let’s look at a couple of reader experiences. Rod Juell wrote about two recent situations: “An established dealer was offering Washington-Franklin coils at very reasonable prices, and his terms of sale included refund of expertizing costs for ‘bad’ certificates.

“I purchased ten stamps. Nine came back with bad certificates. The dealer refunded my money and the cost of the certificates, but also told me he would do no further business with me because I was too picky.

“While at a major national show this past Fall, I saw a stamp I needed at a dealer table. I asked the dealer if he would place it on extension for expertizing. I was taken aback when he said ‘No.’ I didn’t buy the stamp.”

Sean Kennedy provides this perspective: “I have purchased over 6,000 lots on eBay since 2004 and 99.9 percent of my experiences have been positive, however, my only bad experiences have been with how some dealers handle expertizing. Most are very professional and are willing to give a time extension on returns for expertizing. Some, surprisingly are even willing to pay the full cost for an expert certificate if it comes back as a fake, but it is only a handful of dealers that do this.

“Other dealers are willing to refund the cost of the stamp, however, it has to be returned with the original certificate, so I basically foot the cost to certify the dealer’s inventory.

“One of the worst experiences for me is when I return items with certificates noting a fraudulent stamp, that is subsequently relisted on eBay without the certificate noted. Despite the fact that I reported the sellers to eBay, two such items sold to other bidders.”

Obviously, it takes only a few dealers engaging in such practices to make collectors suspicious of all. Of course, it needs to be said that collectors selling material that should be expertized also are sometimes guilty of similar practices. However, dealers can be regulated through their membership in ASDA and other associations, but only if there is a standard set of expectations that can be enforced.

I have written to ASDA president Mark Reasoner, and am hopeful that the concept will be favorably considered. At a minimum, I would like to see these four tenets:

1. A stamp or cover will be placed on extension for expertizing at the request of a potential buyer who is willing to put up a deposit of half the selling price and sign a note saying that the item will be purchased if the certificate is good. The buyer and seller must agree up front as to which expertizing service will do the work.

3. Dealers agree that items that come back with a bad certificate (as their property) may not be forced on the potential buyer even if resubmitted to another service and the item is judged to be good. In any case, the item cannot be sold as genuine until the original certificate has been overtaken by a good certificate either from the original expertizing service, or another.

4. Dealers will not knowingly sell as genuine any material with old certificates saying “genuine” that they have reason to believe are inaccurate.

Under these tenets, though, dealers will not be required to submit for expertizing every stamp or cover they have for sale that could be questioned. While it would nice to think that they would, there are a large number of items that both dealers and knowledgeable buyers would recognize as genuine or not. Besides, even collectors who are not knowledgeable enough have some responsibility for protecting their own interests.

If this list of tenets were adopted, I think many more items would be expertized before being offered for sale than is currently the case, because offering an item with a “good” certificate makes it more salable and eliminates the hassle of dealing with the possibility of a “bad” certificate after a sale seems imminent.

Not only would this benefit both collectors and dealers, I think it also would reduce the amount of nongenuine material being offered, because dealers would not want to run the risk of having to pay for a certificate that they expect to come back as not genuine.

As always, I am happy to hear from readers with thoughts about this subject, or questions and experiences about any aspect of expertizing. I can be contacted at jmhstamp@verizon.net, or at Box 1125, Falls Church, VA 22041-0125.