In this graphically cropped postage corner from a Wells Fargo presorted mailing, the computer has added “**Single Pieece**” as the mail went through post office processing. Are two “e’s” better than one? 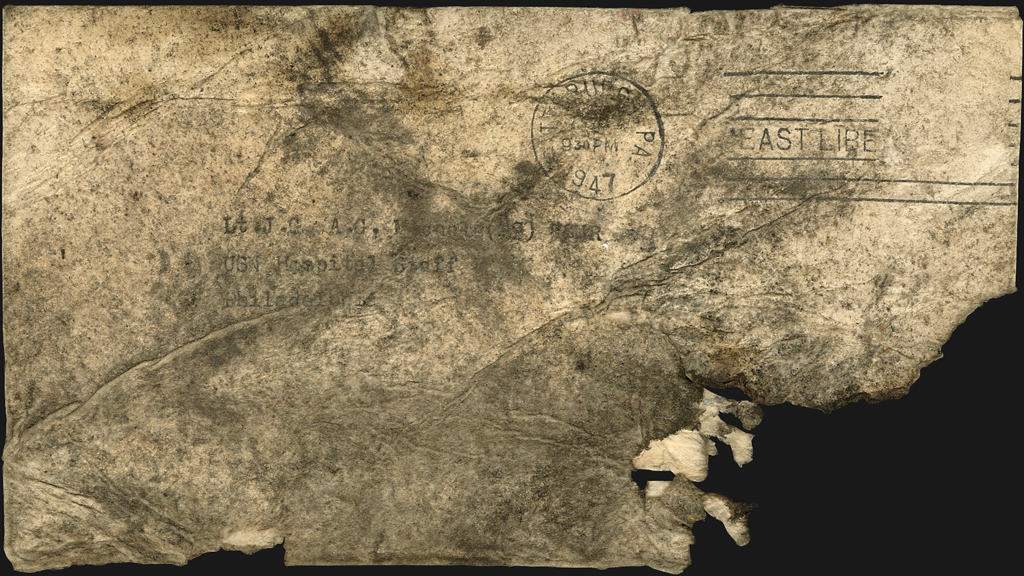 This damaged envelope, barely recognizable as such, is a survivor of a 1947 train wreck. The stamp was dislodged by water from fire hoses. The envelope and all contents were returned to the sender.

Sometimes called “wreck,” “crash” or “distressed” mail, envelopes that survive transportation accidents have a devoted following among some collectors.

These accidents can involve planes, trains, ships, automobiles and trucks.

After the mail is rescued, it is “reconditioned” as the United States Postal Service likes to call it. Then it is sent on to the addressee, often with a notation on the envelope or in an accompanying letter explaining the delay.

While going down a grade at a location known as Bennington Curve, the train left the rails, tore up several hundred feet of track and ties, and then plunged down a hillside into Gum Tree Hollow, a 150-foot ravine.

It was later determined that the train was going more than 70 mph, far too fast for the curve. The run had started off an hour late, and perhaps the crew was trying to make up time.

Among the 24 fatalities were six mail clerks. Another 138 people were injured.

Most of the mail was salvaged over the next two months, including undamaged mail sacks that were sent on their way without notation.

Damaged mail was forwarded after reconditioning, and there are a variety of markings depending upon when the mail was found and where it was processed.

The piece shown here is out of the ordinary as it was not sent to the addressee. That address was damaged beyond readability in the accident. Instead it was returned to the sender, whose name and address is readable on the back flap of the envelope.

As evidence of the honesty of the postal system at the time, among the contents returned is $6 in U.S. currency.

The damaged envelope and contents were returned in a post office penalty envelope, together with a short note dated March 22, 1947, which states: “Dear Sir: The enclosed mail salvaged from the mail car of Pennsylvania Railroad train No. 68, wrecked west of Altoona, Pennsylvania, February 18, 1947, is being returned to you as the name and address of the addressee are obliterated. Respectfully, Paul V. Tillard, Postmaster”

For those interested in transportation disaster mail, there is a specialty society called the Wreck and Crash Mail Society, which publishes a useful quarterly titled Le Catastrophe.

This journal brings together reports from the Air Crash, Ship Wreck and Train Wreck Study Groups, including reports of new material discovered, auction realizations, new literature in the field, and in- depth articles on specific incidents worldwide.

Also, the recently formed Unusual and Dangerous Interruptions Study Group covers events such as terrorism and the mails, major weather delays, and thefts.

More information and a membership application can be obtained from Steven Berlin, 12407 Dover Road, Reisterstown, MD 21136; or by e-mail at drstevenberlin@yahoo.com. Or you can access the society website.

If one “e” is good, two are even better. This may have been the assumption of the person who programmed the computerized canceling device for presorted first-class mail in Minneapolis in May 2007.

Shown nearby is the graphically cropped postage corner from a Wells Fargo cover. The computer added “**Single Pieece**” over the meter on this and presumably every other piece in this mailing.

In fairness, it must be said that misspellings and other errors of this sort are unusual, but it is worth looking carefully at all mail that comes to your mailbox. You never know what you might find.