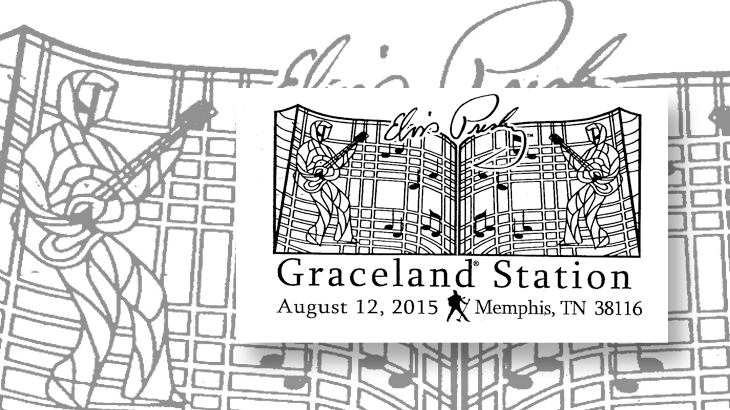 An Aug. 12 postmark from Memphis, Tenn., features the gates at Elvis Presley’s Graceland mansion. The postmark date is also the issue date for the Elvis Presley commemorative forever stamp.

The gates at Graceland in Memphis, Tenn., are a familiar symbol of the home of Elvis Presley from 1957 until his death 20 years later.

The postmark is dated Aug. 12, the issue date for the new Elvis Presley commemorative forever stamp. The postmark design, like the design of the gates themselves, represents sheet music staves with music notation. At left and right, a guitarist (presumably Presley) is shown full length.

The postmark adds a reproduction of Presley’s signature across the top, and a silhouette of Presley within the text at bottom.

The original gates were designed by Abe Saucer. The builder has been identified as Memphis Doors, Dillard Door, and Tennessee Fabricating Co.

The Graceland website, part of Elvis Presley Enterprises, shows a 1957 invoice for the gates, billed at $1,339.

“The gates of Graceland have stood the test of time,” according to the website, “and fans love this unique feature of the King’s castle.”

Though dated on the stamp’s day of issue, the postmark differs from the official first-day cancel, also from Memphis, which has Presley’s signature as its main feature, and the phrase “Music Icons” with a small crown between the two words.

Instructions for requesting postmarks are available here. To obtain the Graceland Station postmark, send your requests to: