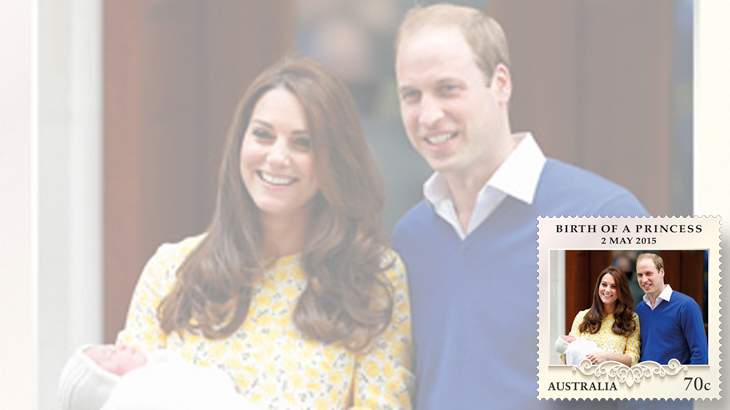 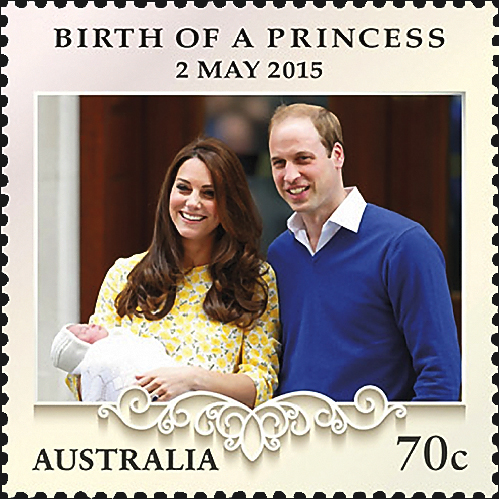 Australia welcomes Princess Charlotte with a new 70¢ stamp to be issued Aug. 25.
Previous
Next

Australia Post will celebrate the birth of Charlotte Elizabeth Diana, fourth in line to the British throne, by issuing a 70¢ domestic-rate stamp Aug. 25.

The stamp shows a photograph of the Duke and Duchess of Cambridge, also called Prince William and Catherine (or Kate) Middleton, leaving St. Mary’s Hospital in Paddington, west London, with their newborn daughter.

Australia Post Managing Director and Group CEO Ahmed Fahour said: “Australia Post is delighted to celebrate the birth of a baby girl to the Duke and Duchess of Cambridge, with a sheetlet of stamps that captures the first public appearance of the happy family.”

“We expect the stamp will be well received as was the royal birth of Prince George stamp in 2013. We encourage stamp collectors and followers of special events to put their orders in early to avoid disappointment.”

Jo Mure designed the self-adhesive stamp. EGO printed it by offset in panes of 10, as well as in booklets of 10.

The second child of the Duke and Duchess of Cambridge, Princess Charlotte was born May 2, 2015, and was christened July 5 at St. Mary Magdalene Church, Sandringham.

She is named in honor of both her great-grandmother Queen Elizabeth II and her late grandmother, Diana, Princess of Wales.