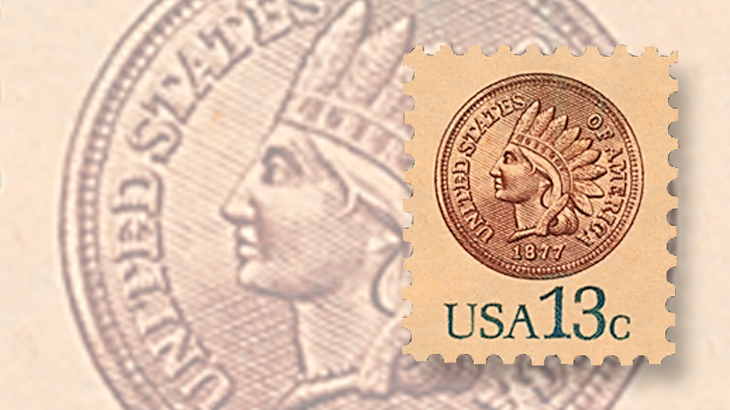 The Indian Head penny designed by James Barton Longacre is featured on this 13¢ stamp issued in 1978.

The Indian Head penny, which serves as the primary design element for a 13¢ experimental stamp issued in 1978 (Scott 1734), was designed by James Barton Longacre, who was born Aug. 11, 1794.

Longacre was chief engraver of the United States mint when the Indian Head penny featuring his design was first produced in 1859. It remained in circulation until 1909, when a new 1¢ coin was minted to commemorate Abraham Lincoln on the 100th anniversary of his birth.

Longacre was born in Delaware County, Pa. His skill as an artist brought him to work for an engraving firm in Philadelphia, and his later successes led to his appointment as the Mint’s chief engraver in 1844. During his tenure in that position, Longacre designed numerous coins, including the Flying Eagle cent of 1856-58, and the $20 gold Liberty Head double eagle coin of 1849-1907.

Longacre’s design of the Indian Head cent is intended to show Liberty wearing an Indian headdress. A story has long circulated that Longacre’s daughter Sarah was the model for the face on the coin. While there is a resemblance between the Liberty portrait and Sarah Longacre, many references dismiss the connection.

The Indian Head Penny stamp was the first of two issued as an experiment to test the printing of smaller stamps to reduce production costs (the second being the 1980 15¢ Dolley Madison stamp, Scott 1822).