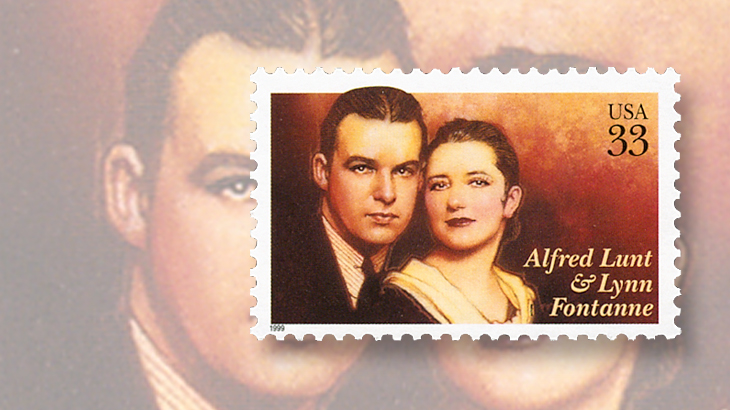 Alfred Lunt and Lynn Fontanne, husband and wife acting team, were featured on a 33¢ stamp in 1999.

Alfred Lunt and Lynn Fontanne, an acting couple married in 1922, first appeared on stage together three years earlier, performing in a summer stock production of A Young Man’s Fancy. In 1923 the couple reunited onstage at the Ritz Theater, as King Charles II and Lady Castlemaine in Sweet Nell of Drury Lane, and they appeared together regularly thereafter in Broadway comedies and dramas.

They also starred in a 1931 film version of The Guardsman directed by Sidney Franklin, but in the process of making the movie they discovered they preferred to act on stage.

Their last stage performance together was in The Visit (1958).

That same year, the refurbished Globe Theater in New York City was renamed the Lunt-Fontanne Theater in their honor.

The 33¢ stamp honoring them (Scott 3287) was issued March 2, 1999, in the Performing Arts commemorative series. It features a portrait of the couple by noted entertainment artist Drew Struzan.