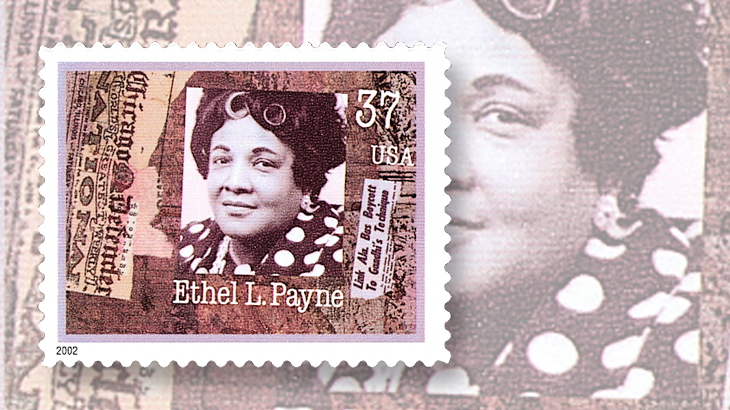 Ethel L. Payne was born in Chicago, Ill., on Aug. 14, 1911. She studied at Crane Junior College (known as Malcolm X College since 1969) and Northwestern University’s Medill School of Journalism, and became active in civil rights groups while working at the Chicago Public Library during the 1940s.

Payne became involved in journalism while working as director of a United States Army service club in Tokyo, Japan, and writing about the experiences of black servicemen stationed there. She was hired as a feature writer and reporter with the Chicago Defender in 1951, and remained there for much of her career.

Payne reported on national and international events, often following developments in the civil rights struggles of the 1950s and 1960s. She traveled to Africa, Indonesia and Vietnam, and reported on the 1956 Montgomery Bus Boycott and the 1963 March on Washington.

In its 2002 profile of her career, the United States Postal Service noted, “Payne earned a reputation as an aggressive journalist who asked tough questions. She once asked President Eisenhower when he planned to ban segregation in interstate travel. The President’s angry response that he refused to support special interests made headlines and helped push civil rights issues to the forefront of national debate.”

In 1965 she was invited by President Lyndon B. Johnson to witness the signing of the Civil Rights Act, and received a pen that Johnson used to sign the new law.