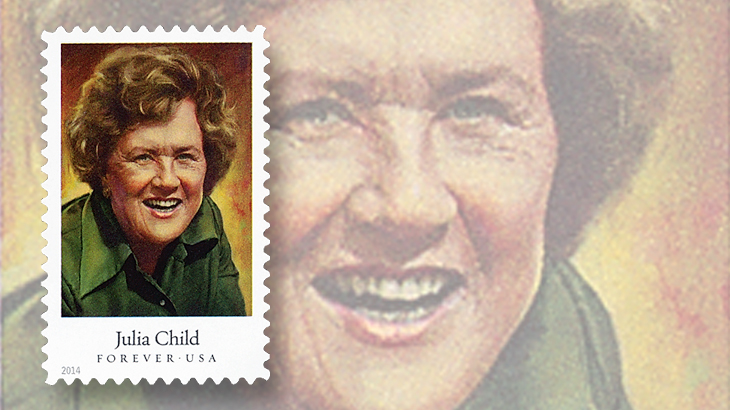 Popular chef Julia Child was honored with a commemorative forever stamp in 2014.

As she matured, she grew to more than six feet tall, but she had hopes of becoming a spy when World War II broke out. To some degree, she succeeded by working research and project development for the Secret Intelligence division of the Office of Strategic Services in Washington, Ceylon and China. She married fellow OSS agent Paul Child after the war, and the couple moved to Paris.

Exposed to and enthralled by French cuisine, Julia attended Le Cordon Bleu and began working on a cookbook with two French women. Mastering the Art of French Cooking became a bestseller in the United States upon its publication in 1961.

Child first appeared on television the following year, and by 1963 had her own cooking show on public television station WGBH in Boston, Mass.

The French Chef was broadcast for more than 10 years, and was followed by a series of other successful cooking shows hosted by Child.

She was awarded the French Legion of Honor in 2000, and the Presidential Medal of Freedom in 2003. She remains a cultural icon long after her death from kidney failure in 2004 at age 92.

Julia Child is one of five “Celebrity Chefs” honored in a pane of 20 forever stamps issued Sept. 26, 2014 (Scott 4926). The U.S. Postal Service wrote that Child “demystified French cuisine in the United States.”