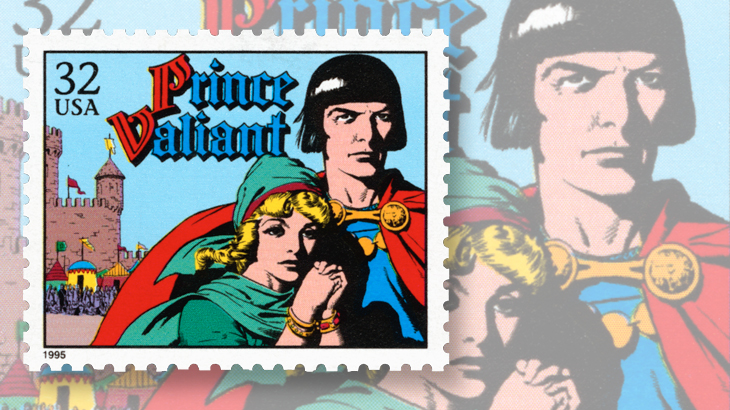 Prince Valiant, the creation of Canadian-born artist and writer Hal Foster, was featured on a 32¢ stamp in the Comic Strip Classics set.

The 20 Comic Strip Classics stamps issued in 1995 paid tribute not only to the familiar “Sunday funnies” that so many Americans grew up reading, but also to the skilled artists and writers who created the nation’s finest examples of this popular entertainment genre.

The text printed on the reverse of the 32¢ Prince Valiant postage stamp (Scott 3000s) includes praise for Hal Foster: “Prince Valiant was the last major strip to be created as a full-page, full-color picture-story. Foster’s meticulous research for his Arthurian legend lent authenticity to battle scenes and domestic scenes alike.”

After working as a staff artist for the Hudson’s Bay Co., Foster traveled to the United States in 1919 and created a successful comic strip in 1928 based on Edgar Rice Burrough’s Tarzan stories.

He developed the concept for Prince Valiant, selling publisher William Randolph Hearst on the idea. The strip debuted in 1937, and continues today, produced by other writers and artists following Foster’s retirement in 1980. He died in 1982.