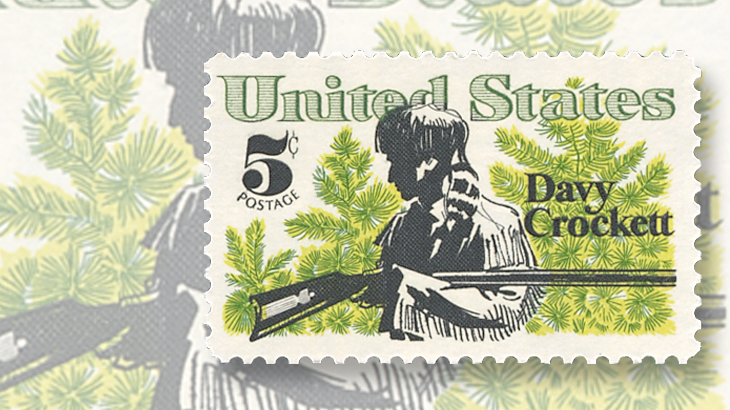 A 5¢ stamp honoring Davy Crockett was issued on the anniversary of his birth in 1967.

According to the records of the United States Congress, David Stern “Davy” Crockett was born Aug. 17, 1786, “at the confluence of Limestone Creek and Nolichuckey River in the State of Franklin, present day Greene County, Tenn.”

As a young man, Crockett became an able frontiersman and hunter, and built a reputation as an engaging storyteller. He enlisted in the Tennessee militia in 1813 during the Creek War.

After serving as justice of the peace, Crockett was elected to the Tennessee General Assembly in 1821, and the U.S. House of Representatives in 1827. Though unsuccessful in his re-election efforts in 1830, he was again voted to Congress for a term beginning in 1833. And once again, he was not re-elected.

Crockett decided to move to Texas in anticipation of the coming revolution. Leaving behind his family — his second wife and several children — he entered Texas early in 1836 and arrived at the Alamo on Feb. 8.

Two weeks later, the mission-turned-fortress was attacked by the Mexican army led by Gen. Santa Anna. The Alamo defenders were killed, including Crockett, who most likely perished on the final day of the battle, March 6, 1836.

Davy Crockett was well-known for his exploits during his lifetime, and his fame grew considerably after his death. More than a century after the Alamo, Crockett was further mythologized in Walt Disney television productions starring Fess Parker.