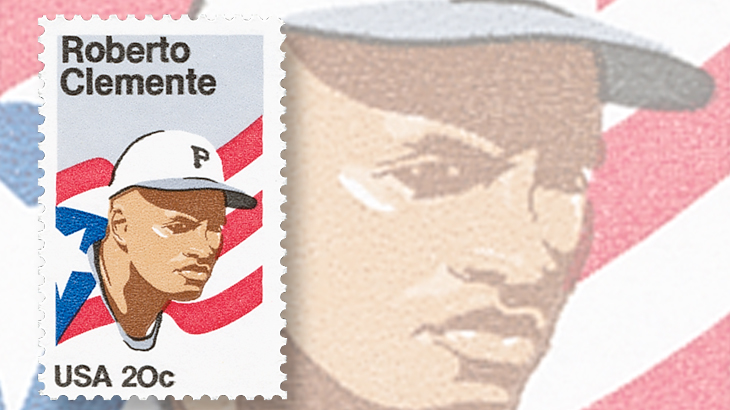 The 20¢ stamp honoring baseball legend and humanitarian Roberto Clemente was issued in 1984.

Born Aug. 18, 1934, in the city of Carolina on Puerto Rico’s northeast coast, Roberto Clemente became a beloved figure in professional baseball long before his tragic death at age 38.

During the off-season, on the last day of 1972, Clemente was accompanying a relief flight heading to Managua, Nicaragua, which had suffered an earthquake just a week earlier. The overloaded plane crashed shortly after taking off from Puerto Rico, killing all aboard.

After playing baseball in Puerto Rico as a youngster, Clemente was signed to a minor league contract by the Brooklyn Dodgers in 1952, who just five years earlier had become the first team to sign a black player, Jackie Robinson, to a major league contract.

Clemente was drafted by the Pittsburgh Pirates, and made his major league debut on April 17, 1955.

He joined the United States Marine Corps Reserve in 1958, and remained a reservist until 1964.

As the Pirates’ right fielder, Clemente batted .312 in 1960 and led the Pirates to a World Series victory over the New York Yankees in seven games. During his career he played in 2,433 games and compiled 3,000 hits in 18 seasons.