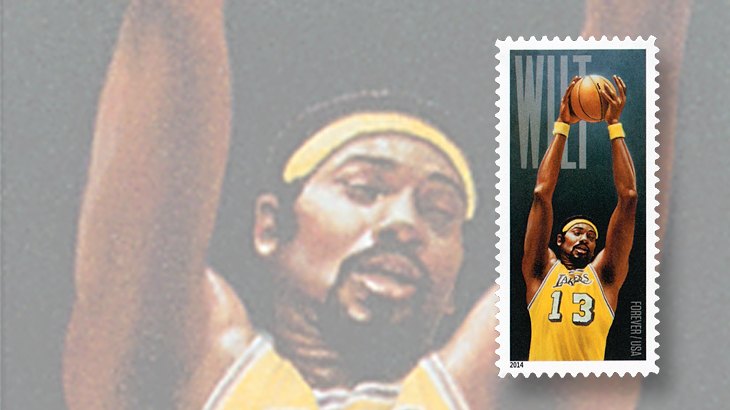 College and NBA basketball star Wilt Chamberlain, on one of the two forever stamps honoring him in 2014.

One stamp shows Chamberlain in the uniform of the Philadelphia Warriors (later the San Francisco Warriors), where he played from 1959 to 1965. The second depicts him as a member of the Los Angeles Lakers, his team from 1968 until 1973.

Wilton Norman Chamberlain was born Aug. 21, 1936, in Philadelphia, Pa. He played basketball at Overbrook High and at the University of Kansas, where he was picked for the all-conference and All-America teams.

Awaiting NBA eligibility after leaving Kansas, the 7-foot-1-inch tall center played for a season with the Harlem Globetrotters.

In his first NBA season with the Philadelphia Warriors, Chamberlain was named the league’s Most Valuable Player and Rookie of the Year.

As a member of the Warriors, Chamberlain scored 100 points in a single game on March 2, 1962, a record that still stands today.

He was traded to the Philadelphia 76ers in 1965, winning an NBA championship in 1967. Five years later he would win a second championship with the Lakers.

Chamberlain was named the NBA Most Valuable Player four times, and picked for the NBA All-Star Game 13 times.

Although an avid fitness buff following his playing career, Chamberlain succumbed to heart trouble in 1999 at age 63.