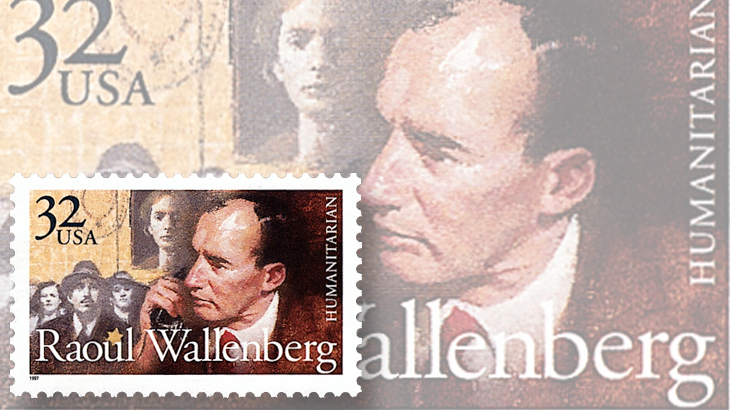 The 32¢ stamp honoring Swedish diplomat Raoul Wallenberg, who saved thousands of Jewish lives during World War II, was issued in 1997.

Swedish diplomat Raoul Wallenberg, who is credited with saving thousands of lives during World War II, was born Aug. 4, 1912, in Lidingo, Stockholm, Sweden.

He traveled to the United States in 1931 to study architecture at the University of Michigan. Employed by a bank in Israel in 1935, Wallenberg began learning how Jewish people were suffering in Europe as Nazi influence expanded.

After returning to Sweden, Wallenberg began working for a trading company owned by a Hungarian Jew, and was appointed in 1944 as the second secretary of the neutral Swedish legation to German-occupied Budapest. A Lutheran from birth, Wallenberg, with the support of the United States and Secretary of State Cordell Hull, set up Swedish safe houses in Budapest and issued falsified papers to provide sanctuary for the Jews of that city.

He supplied shelter, medicine and food to thousands, and saved thousands more with elaborately fabricated papers that bestowed Swedish protection to Jews who would have perished at the hands of the Nazis.

When the Soviet army entered Hungary in January 1945, Wallenberg was arrested and imprisoned without explanation.

The Soviet Union released a statement in 1957 that Wallenberg had died 10 years earlier of a heart attack in Moscow’s Lubyanka Jail, but other reports contradict this claim.

A 1981 public law declaring Wallenberg an honorary U.S. citizen states, “reports from former prisoners in the Soviet Union, as recent as January 1981, suggest that Raoul Wallenberg is alive.”