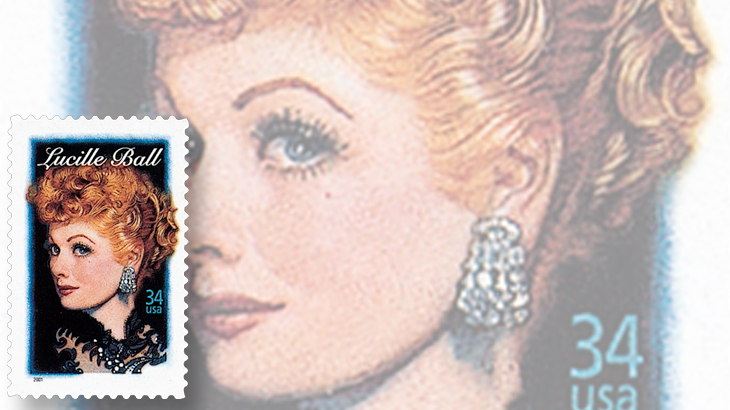 Screen and television star Lucille Ball, on a 34¢ stamp from the Legends of Hollywood series.

Actress and television producer Lucille Ball was born Aug. 6, 1911, in Jamestown, N.Y. Her father died when Lucy was three years old, and the family moved to Celoron, N.Y., just a few miles away.

She was cast alongside Katharine Hepburn and Ginger Rogers in 1937’s Stage Door, and she joined the Marx Brothers in Room Service the following year.

I Love Lucy, the television comedy series the couple created, debuted on CBS in 1951. It was an immediate success, with Ball and Arnaz starring as Lucy and Ricky Ricardo.

The couple established Desilu Productions, and are credited with numerous television production innovations, including the use of three cameras in filming episodes before a live audience.

Ball won five Emmy awards for her work in television, and in 1986 she received the Lifetime Achievement award from the John F. Kennedy Center for the Performing Arts.

Lucille Ball has now appeared on three United States stamps since 1999, when the first, a 33¢ I Love Lucy stamp, was issued in the 1950s Celebrate the Century set (Scott 3187l).