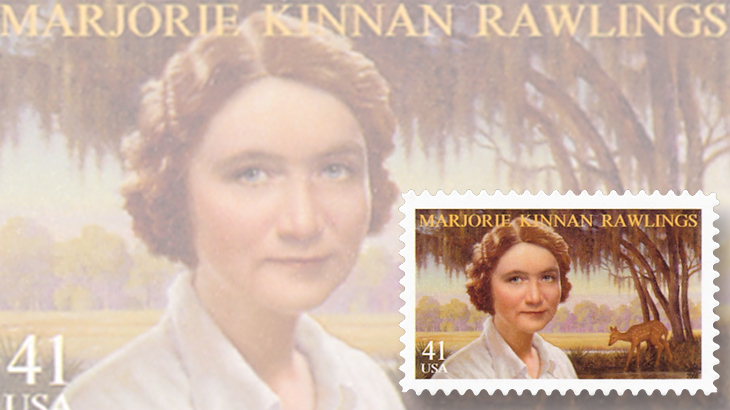 The 41¢ stamp honoring Marjorie Kinnan Rawlings is the 24th stamp in the Literary Arts commemorative series.

The 24th stamp in the Literary Arts series honors Marjorie Kinnan Rawlings, who was born Aug. 8, 1896, in Washington, D.C.

Rawlings is best known for her novel The Yearling, a coming-of-age story about young Jody Baxter and his adopted fawn, Flag. The book won the Pulitzer Prize for fiction in 1939.

A few years later Rawlings wrote her autobiography, Cross Creek, about her life in rural Florida, where she managed a 72-acre orange grove.

Rawlings attended the University of Wisconsin-Madison and later wrote for newspapers in Louisville, Ky., and Rochester, N.Y.

She published her first novel, South Moon Under, in 1933.

The 41¢ stamp honoring Rawlings (Scott 4223) was issued Feb. 21, 2008, in Hawthorne, Fla., with a dedication on the grounds of Rawlings' home in Cross Creek, which is now a Florida State Park and a National Historic Site.