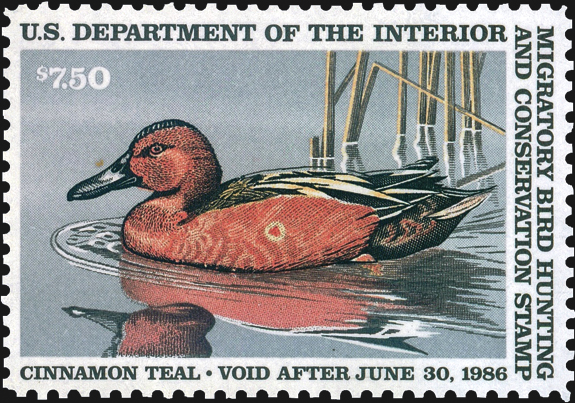 Due to the extra spot of tan in the middle of the cinnamon teal, this variety of Scott RW52 has been referred to as the “shot duck.” 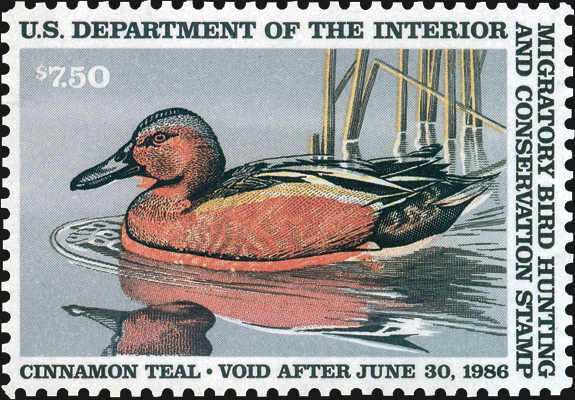 This color shift on the 1985 duck stamp showing a cinnamon teal (Scott RW52) has been described as a “duck on a pool of blood.” 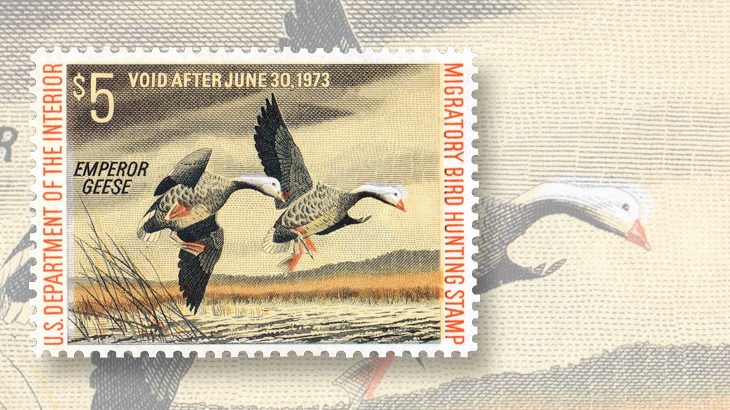 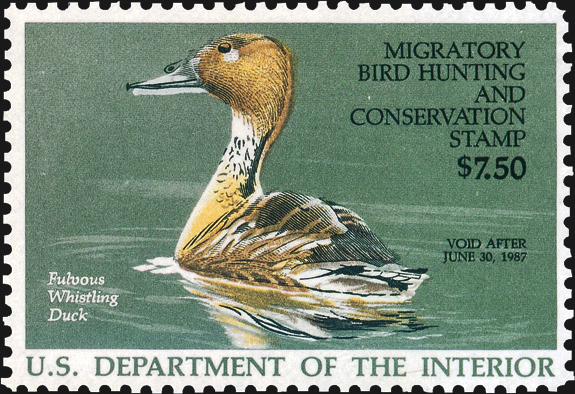 The black intaglio is shifted upward on this 1986 duck stamp (Scott RW53). 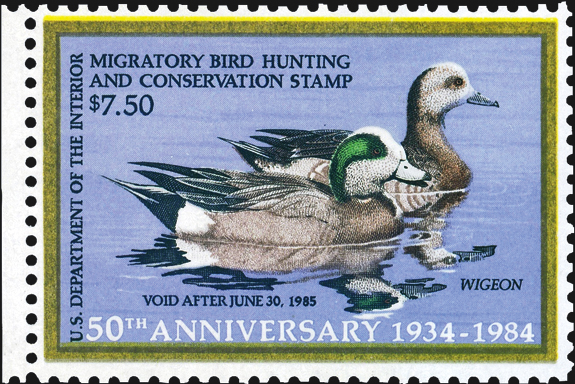 The yellow border is misaligned on this 1984 duck stamp picturing widgeons (Scott RW51). 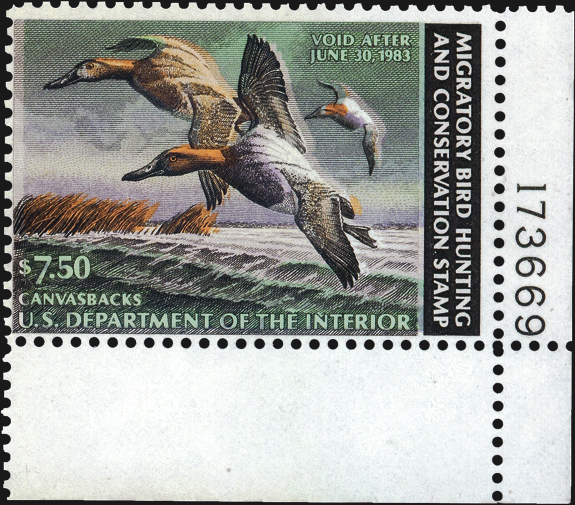 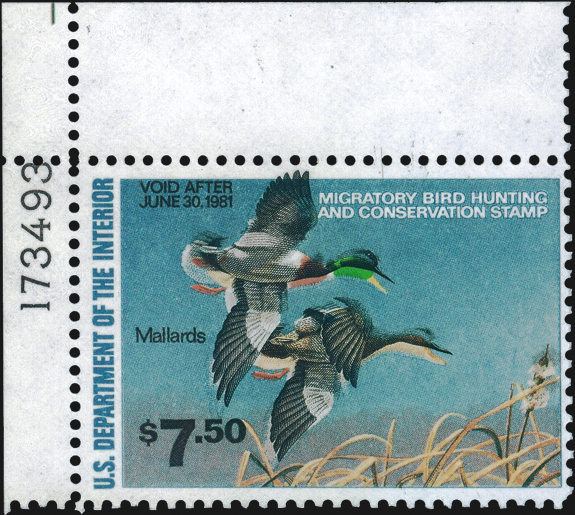 The upward intaglio shift on this 1980 duck stamp (Scott RW47) causes a doubling of the mallard drake and hen in flight. 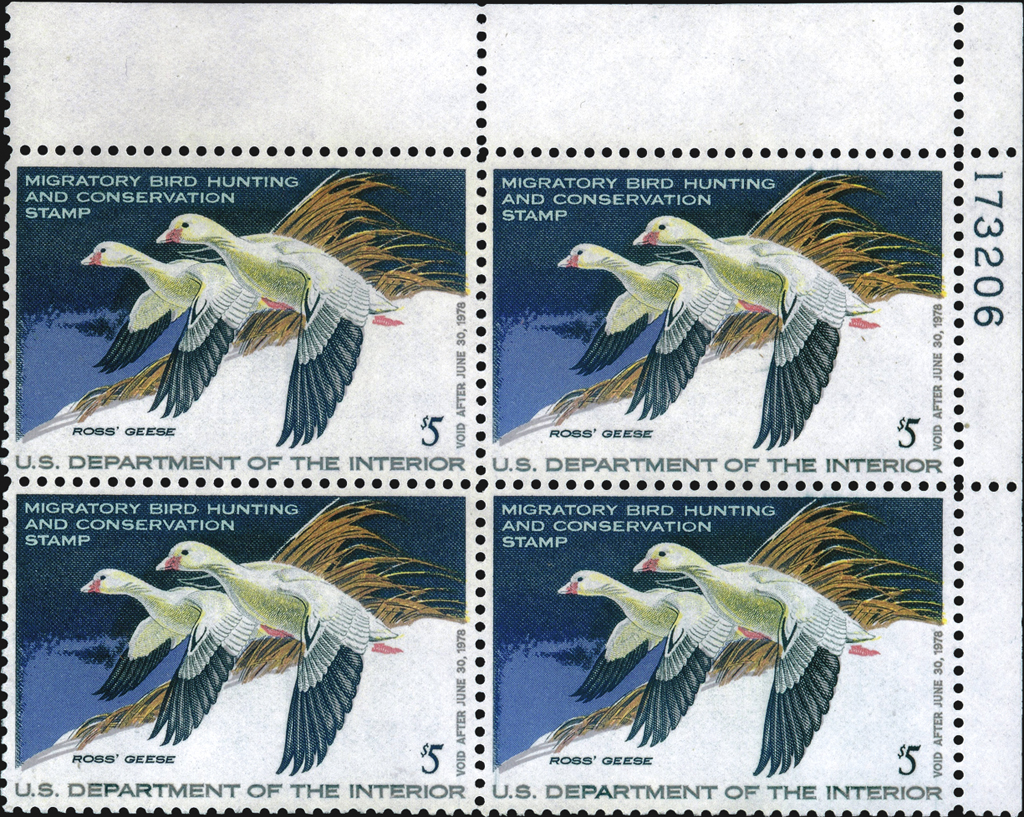 On this plate number block of the 1977 duck stamp (RW44), the pink color has shifted to the right, causing it to look like the feet of the Ross’s geese are not attached. 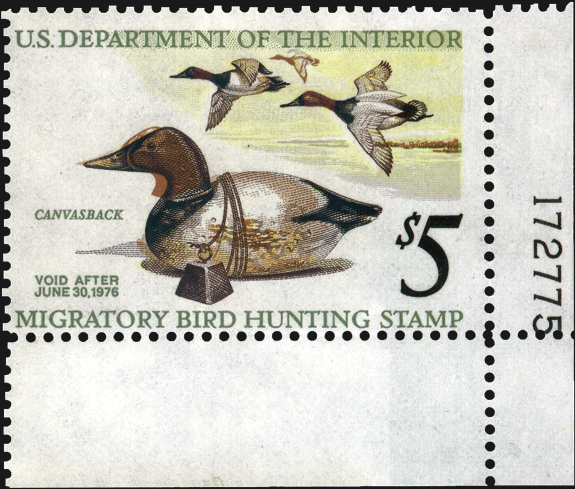 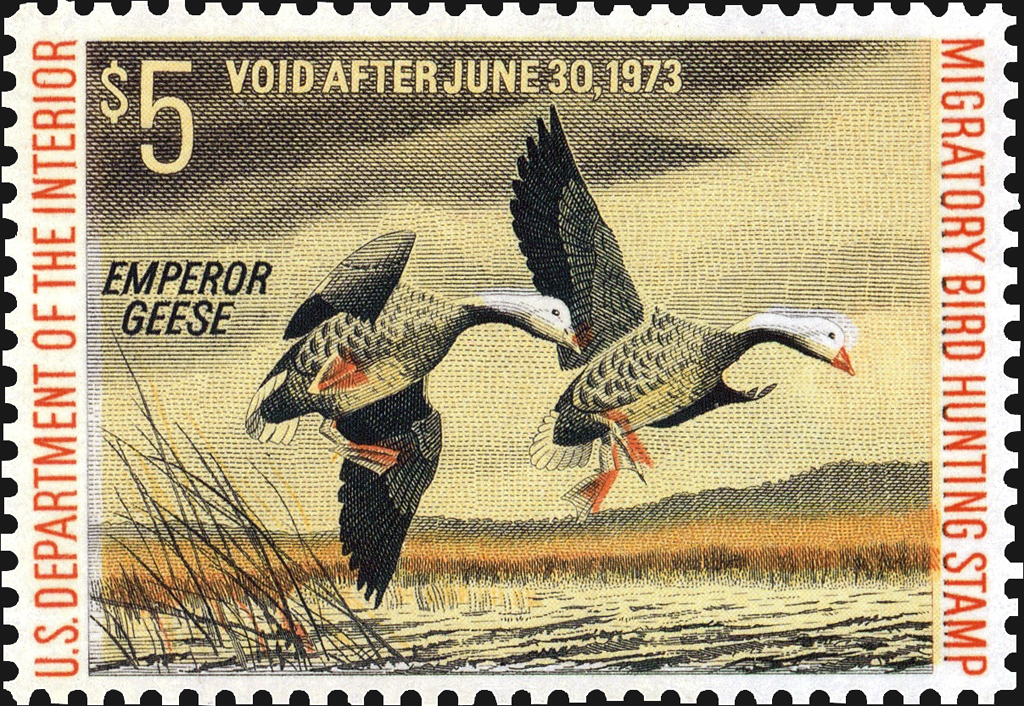 This 1972 duck stamp (Scott RW39) has a color misregistration, which can be seen in the orange feet of the emperor geese, on the white of their heads and in the background. 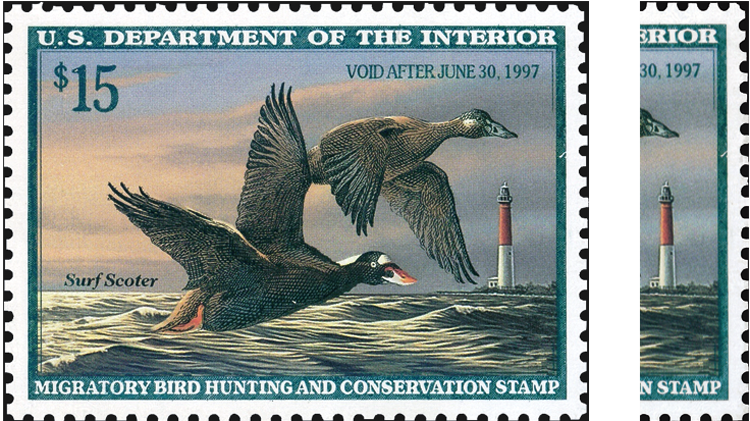 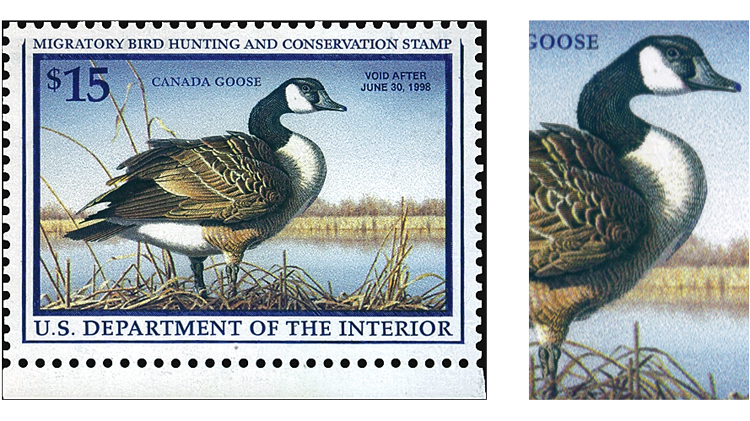 The plate flaw on this 1997 duck stamp (Scott RW64) is known as the “broken breast” variety. 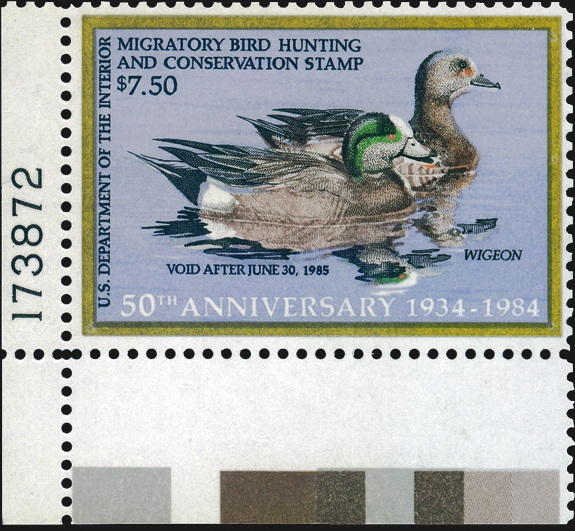 The black is shifted upward on this plate number example of the 1984 duck stamp (Scott RW51).
Previous
Next

Duck stamps. Miniature works of art that have over the years tickled the fancy of stamp collectors and hunters alike for their inherent beauty, lifelike depictions and, of course, their funding of wetlands conservation efforts.

Truth be told, I hold these little pieces of revenue paper directly responsible for my return to the stamp hobby. Every fall I’d dutifully purchase a duck stamp, sign it, and place it in my wallet ready for the upcoming season, where it would need to survive miserable weather, leaky waders and wet retrievers.

Mercifully, kept in glassines, all did survive, and at season’s end, each would be placed in a stock book left over from my childhood collecting efforts, right next to the mint stamp I also bought, just “for the ducks.”

Over the years, I ended up with quite an accumulation of these stamps, and once they began to overflow their stock book, I bought a Scott United States Federal and State Duck Stamp album to house them in.

Suddenly, I had all those empty spaces to fill. The collector in me was rekindled, and the rest, as they say, is history.

High face values (increased from $15 to $25 just this year) and the pricey early issues aside, a bit of determination is really all it takes to complete a full run of the  federal duck stamps, a worthy and attainable goal that results in a group of album pages that are a joy to look at.

But once the spaces are filled, then what? Is it time to move on to another pursuit, or is there some way to enhance the basic collection?

Just as with postage stamps and despite a printer’s best intentions, mistakes on duck stamps do slip through the system and thankfully make it into the hands of collectors.

These mistakes can be anything from bona fide errors (which tend to be budget-maiming) to freaks and oddities, or varieties, which are much easier on the stamp-collecting budget and provide an affordable way to elevate a duck stamp collection.

Many of these are color shifts. The first one shown here is the 1972 waterfowl stamp (Scott RW39) that depicts a brace of emperor geese looking for somewhere to have a paddle. The color misregistration has caused multiple issues. Note the orange of the geese’s feet, the white of their heads and the entire yellow background situated a bit to the right and up.

On the 1975 duck stamp picturing a canvasback decoy with a trio of the ducks in flight at top (Scott RW42), the brown color has shifted to the left, most easily seen on the decoy’s head.

The shift of the pink color to the right results in displaced beaks and unattached feet for the Ross’s geese shown in the plate block from 1977 (Scott RW44).

The 1980 duck stamp (Scott RW47) depicts a mallard drake and hen in flight with an upward intaglio shift virtually doubling each bird. Note how the wing tip of the mallard has been extended up and into the white border of the stamp, almost touching the perforations. This is one of several dramatic duck stamp color shifts that really make a collection sparkle.

Another intaglio shift, this one to the left, occurs on the 1982 duck stamp depicting more canvasbacks (Scott RW49). This shift results in a silhouette-like image to the right of each duck, almost providing a sense of speed to their flight.

This is appropriate for the canvasback, the fastest duck in North America and routinely clocked at 70 mph. Here the black background of the scene almost touches the stamp’s perforations at right.

Next up are a pair of widgeons illustrated on the 1984 issue (Scott RW51). In the first illustration of this stamp, the yellow border is misaligned upward with everything else in its proper position, while in the second illustration the border is normal but the black has shifted upward, most noticeable at the eye patch of the drake (in the forefront) and the hen’s beak.

In the first illustration of the 1985 duck stamp showing a cinnamon teal (Scott RW52), there is another dramatic color shift resulting in what has been described as a “duck on a pool of blood,” a creepy description but one that nonetheless fits.

Equally as creepy is the description of the second example, the so-called “shot duck” that has a tan splotch in the middle of the cinnamon teal, possibly due to a foreign body on the printing plate. A decent number of examples of these can be found, so it is not a “one-off” freak or oddity but rather a variety.

The fulvous whistling duck of 1986 (Scott RW53) is known with the black entirely missing, a major error that is quite pricey as well as scarce. For our money-conserving purposes, we’ll look at another intaglio shift of the black color, in this example, upward.

Known as the “blind duck,” this stamp appears to have had more registration problems than most with examples that can be found showing the black eye in all different positions and to varying degrees.

Collecting a bunch of these makes for an eye-catching mini-study of this particular waterfowl stamp.

I will finish up with a couple of nonshift varieties.

First is the 1996 duck stamp (Scott RW63) with the broken inner frame at right variety. The design showcases a pair of surf scoters in flight with New Jersey’s Barnegat Lighthouse in the background.

The last example exists by virtue of progressive printing plate deterioration and is known as the “broken breast” variety. This plate flaw is found on the 1997 duck stamp (Scott RW64) and appears as a linear vertical defect in the Canada goose’s front end.

This has only been a short primer on federal duck stamp varieties; there are many more known and available and probably some that haven’t even been reported yet.

Hopefully it has served to whet your appetite and inspired you to consider seeking duck stamp varieties to augment your collection.