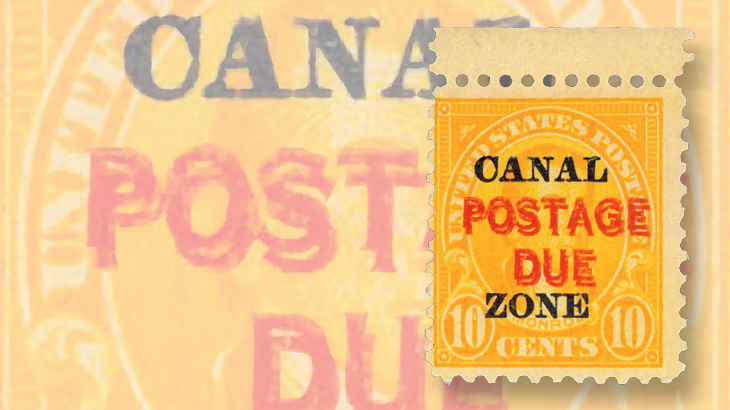 A scarce variety of the 1925 Canal Zone 10¢ orange postage due stamp with the red “POSTAGE DUE” overprint doubled will be offered Sept. 9 by Kelleher Auctions of Danbury, Conn. 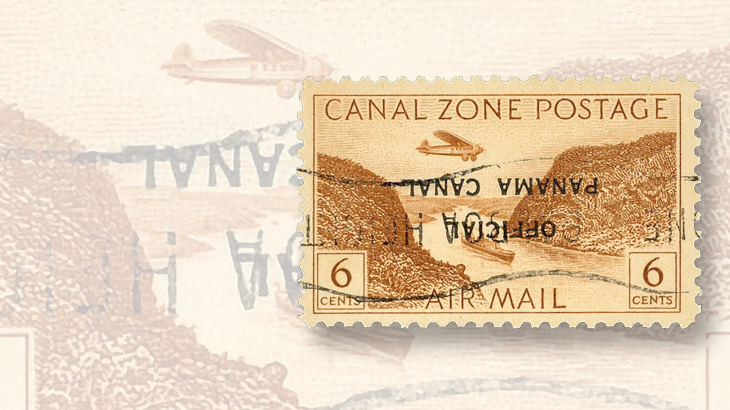 The Kuske collection of Canal Zone material will be auctioned Sept. 9 by Kelleher Auctions of Danbury, Conn. The sale will include this 6¢ Official airmail stamp with inverted overprint.
Previous
Next

An impressive range of elusive errors and varieties from the Canal Zone, the onetime United States territory surrounding the Panama Canal, will be offered by the firm of Daniel F. Kelleher at its offices in Danbury, Conn. on Sept. 9.

The stamps are from a specialized collection formed by Donald A. Kuske, a retired chemist who grew up in North Dakota.

Although the canal was not opened until 1914, the United States established a 552-square-mile zone of control in 1904, after helping the Colombian province of Panama to secede.

The first Canal Zone postage stamps, consisting of Colombia issues overprinted for the new nation of Panama and then handstamped for the Canal Zone, appeared the same year.

Over the course of construction, some 75,000 workers were involved in building the canal, including hundreds of Americans. The waterway stretches 50 miles across the Isthmus of Panama, from Colon (formerly Aspinwall) on the Caribbean side to Panama City on the Pacific side.

As an engineering accomplishment, commercial boon and strategic asset, the canal has few rivals in human history.

Nine post offices operated in the Canal Zone. By the time the zone was abolished in 1979 and control of the waterway began to revert to the Panamanian government, it had issued over 250 postage stamps. Many are common and inexpensive, but a few scarce varieties command significant prices.

Kuske built his Canal Zone collection patiently over seven decades, waiting for other major holdings to be dispersed at auction. The earliest Canal Zone issues provide a rich delight of overprint errors and misprints, with some surviving in just a handful of examples. Mr. Kuske owned many of them.

Typical of these is a bright, carmine red and black 2-centesimo stamp of 1907. The portrait of Fernandez de Cordoba in the center is inverted, and the vertical “CANAL/ZONE” overprint reads up instead of down (Scott 23g). Nine examples of this dual error are recorded, all used and apparently all faulty to some degree.

“This stamp would be one of the nicer examples,” notes the Kelleher auction catalog, mentioning a small corner crease and paper cut from the device that applied the very light cancellation. Described as extremely fine, the stamp has an estimate of $7,500 to $10,000.

Another highlight is a 1904 1c green stamp showing a map of the isthmus, with the “CANAL ZONE” overprint inverted (Scott 9c). Presumably one sheet of 100 was produced with the error, but only six examples seem to have survived, probably all used. The one in the Kelleher sale, very fine with a barred cancellation and a small repair at bottom, is estimated at $4,000-$6,000.

A simple typographical error makes the 8¢ on 50c of 1904 (variety of Scott 15) valuable. In this case, the underlying stamp is a Colombia issue, with a red overprint obliterating the old country name at top and adding the new country name, reading up, at left and right.

Overprints for the Canal Zone were not applied just to Panama stamps. U.S. definitive issues were similarly put into service, and again, collectible mishaps occurred.

A block of four of the 2¢ Washington from the Fourth Bureau issue of 1922-25 bears an interesting error on the top left stamp: the word “CANAL” is omitted, with the stamp showing only “ZONE” (Scott 97d). The other three stamps in the block are normal.

Kelleher notes that only three examples of this error are known, and that some famous-name collections of the past lacked it. The block, with original gum but previously hinged, is pegged at $1,500 to $2,000.

Eventually, the Canal Zone issued its own specially designed stamps. Most are common, though a few were overprinted for airmail or Official service, and the inevitable errors arose.

A 6¢ airmail stamp showing a mail plane flying over the Gaillard Cut, one of the canal’s most dramatic features, was overprinted “Official/Panama Canal”. One sheet of 50 got out with the overprint inverted (Scott CO14a). The stamp in the Kelleher sale, with the wavy line precancel all known examples have, is estimated at $1,000-$1,500.

Not all rarities will fetch such high sums. A 1925 postage due stamp, produced by overprinting the 10¢ orange Madison stamp of the U.S. Fourth Bureau issue first with “CANAL ZONE” in black and then with “POSTAGE DUE” in red, is known with the red overprint doubled (Scott J17a).

Just 98 examples were issued, yet the estimate for the original gum, hinged example of this colorful misprint is a comparatively modest $250 to $350.

Lots can also be viewed, and bids placed, at Stamp Auction Network and at Kelleher Auctions at any time until the sale date.

The sale takes place at Kelleher’s offices on Sept. 9 at 1 p.m. An 18 percent buyer’s premium will be added to the hammer price of all lots.